CELTIC’S forgotten star Karamoko Dembele is out of contract at the end of this month.

The 19-year-old winger was tipped for great things as he emerged during Brendan Rodgers’ reign, but, amazingly, he has yet to start a first-team game.

Dembele played the entire second-half in the 2-1 win over Hearts at Parkhead in the last Premiership match of the 2018/19 campaign. Neil Lennon replaced on-loan Scotland international Oli Burke with the London-born, Glasgow-raised prospect and he did enough to cement a place in the Scottish Cup Final squad against the same opponents a week later, on the iconic date of May 25. 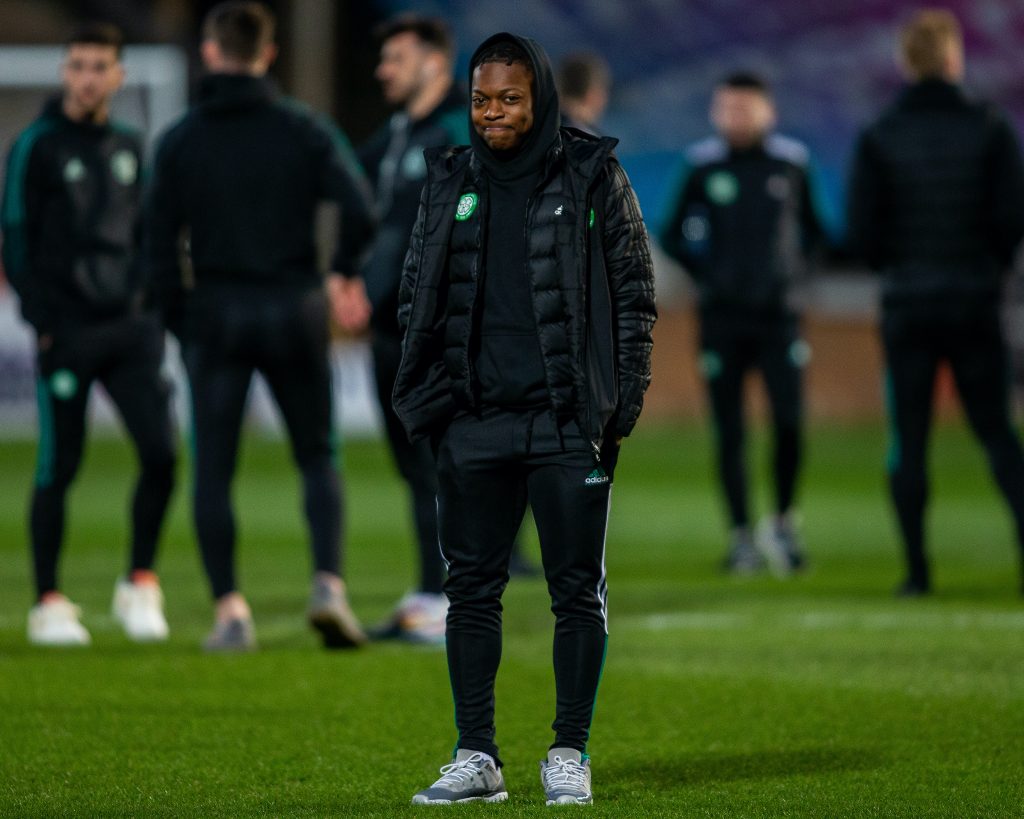 ALL ALONE…Karamoko Dembele walks on the Tannadice pitch while his team-mates chat before the 3-0 Scottish Cup win over Dundee United in March.

He remained on the substitutes’ bench – with Burke heading back to West Brom – when a second-half double from Odsonne Edouard shot the Hoops to the incredible treble treble.

However, very little has been seen of the one-time wonder Bhoy since that afternoon and his chances of impressing new boss Ange Postecoglou were scuppered when he suffered a dreadful ankle injury in the pre-season match at Bristol City. The teenager had to be helped off in the first-half after a wayward challenge.

Dembele was named in the player pools for the Premiership encounters against Dundee (3-2) and Hibs (0-0) before making an 84th-minute appearance for Filipe Jota in the 2-0 win over St Mirren at Parkhead on March 2. 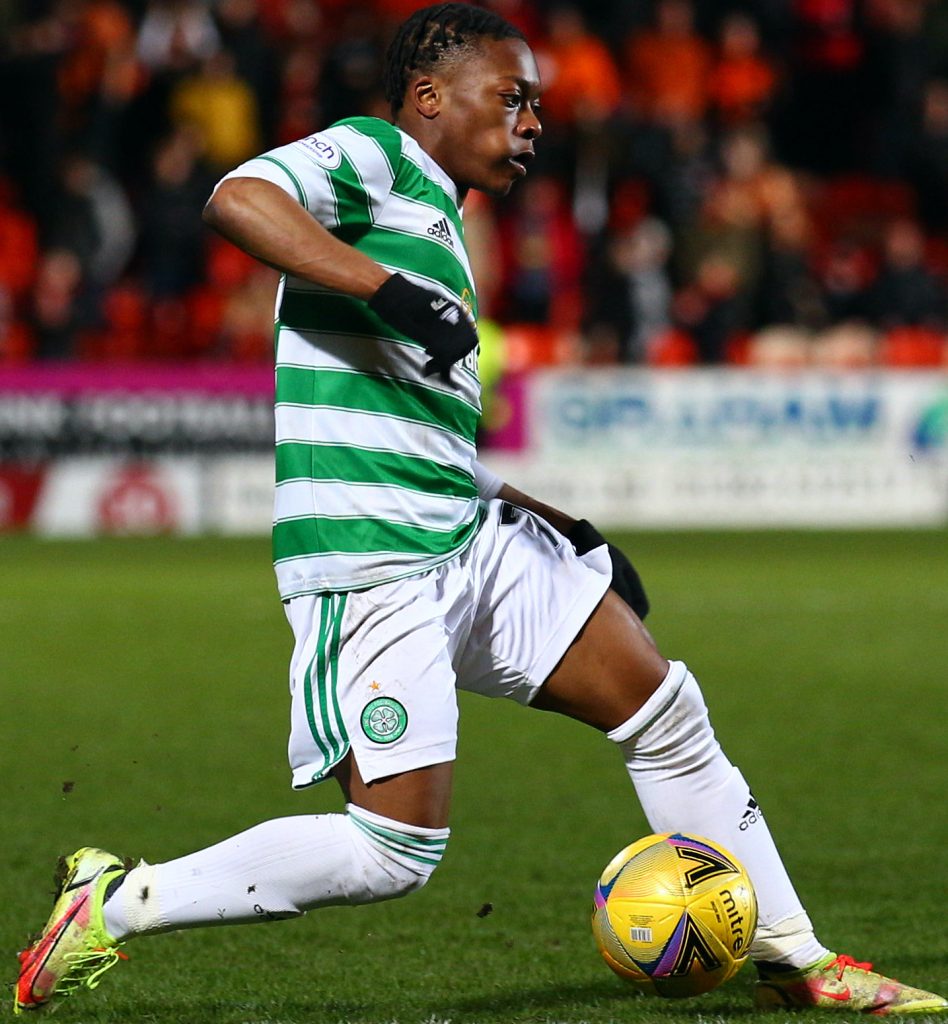 ON THE BALL…Karamoko Dembele shows the moves that made him one of Celtic’s highest-rated prospects.

He came on for James Forrest in the 75th minute of the 3-0 Scottish Cup victory over Dundee United at Tannadice later in the month, but dropped off the radar again.

Dembele has been named in the squad for the visit of Giovanni van Bronckhorst’s Ibrox outfit for the crunch confrontation at Parkhead at noon today, according to the Daily Record.

It is highly unlikely he will figure from the start, but the kid may still have a role to play to prove he is worth a new contract.

There are three more league fixtures after today with Hearts due in Glasgow on Saturday, a return to Tannadice the following midweek and then the final Premiership match against Motherwell at Parkhead on May 14. 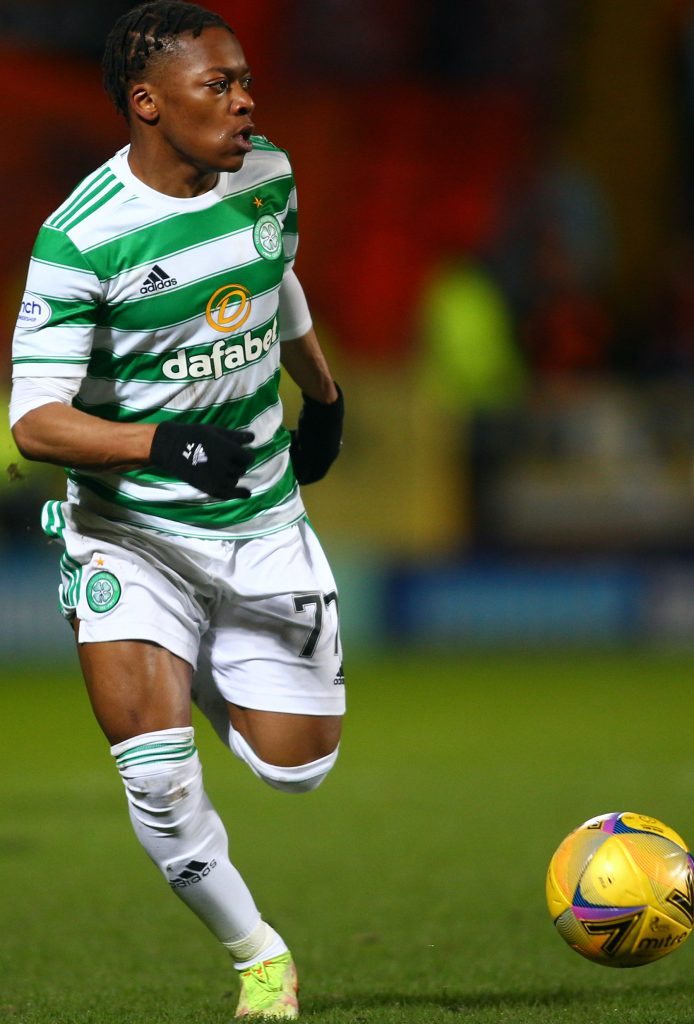 ON THE MOVE….Karamoko Dembele prepares for a run at the Dundee United defence.
It’s almost three years to the day since Dembele replaced Burke against the Edinburgh club, then managed by Craig Levein.

Time appears to have stood still for the top-rated prospect. Now, with the clock ticking on his contract, Dembele will realise he is now drinking in football’s equivalent of the Last Chance Saloon.

We wish him luck – he certainly deserves some good fortune after this season’s false start.