ODSONNE EDOUARD will have to toughen up if he hopes to hit the top with Celtic.

That’s the view of former Hoops striker John Hartson as he gives his verdict on the club’s record signing with the Frenchman looking likely to get the nod to lead the attack against Steven Gerrard’s Ibrox side at Parkhead on Sunday.

Edouard, who cost £10million when he arrived from Paris Saint-Germain in the summer following an impressive season-long loan stint, has already enjoyed success over the Govan outfit.

He came off the bench to arc in the winner for 10-man Celts in the 3-2 triumph at Ibrox on March 11 last year. The champions were trailing 2-1 and had Jozo Simunovic sent off with more than half-an-hour to go.

The visitors equalised before Edouard ambled forth to curl a peach of an effort high past the diving Wes Foderingham for the points-clincher.

And he rolled in two to make it seven in a row for the title kings as they routed the Ibrox men 5-0 at the end of last term.

Hartson believes the powerful attacker has it within his talents to make a real name for himself – but needs to add something to his game. 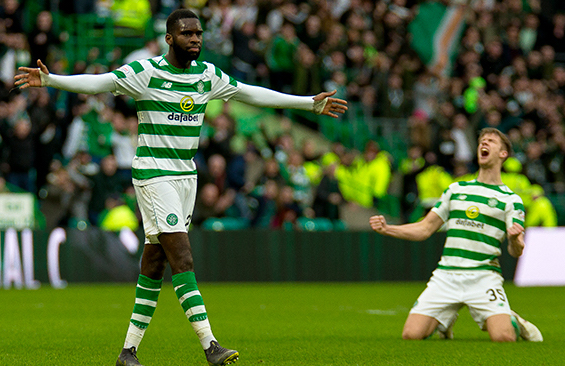 The former Welsh international marksman, speaking to the Daily Record, said: “Edouard has done very well against Rangers since being at Celtic. I like what I see and you need to remember he is still very young.

“Edouard is a work in progress and he can develop more, especially in his hold-up play. When he gets in front of goal, he finishes. But he can be more physical.

“He is some size. I walked past him at Lennoxtown a few weeks back and he towers over me. He’s a big strapping lad and I have been impressed.

“Edouard can get better and I am sure he will. The physical side is an art and you have to learn how to pin defenders.

“Celtic had a couple of strikers who were good at it in myself and Chris Sutton.

“We were big, experienced target men and we knew how to get a hold of the ball in  big games.

“Against Rangers or on big European nights, you need to be able to take the pressure off the team and get up the pitch. That comes with know- how and experience.

“Yes, you need to score goals, but, as a focal point for the team, you also need to take pressure off.

“When the ball comes you need to keep it and give it to a team-mate.

“That’s not easy. It’s an art and Edouard will learn a lot more about that as time goes on.”