JAMES FORREST agrees with Neil Lennon that Celtic’s consecutive blankety-blanks Premiership performances have not been acceptable.

The champions have been frustrated in their last two league outings as they have have shed four points in 0-0 draws against Livingston at Parkhead and Hibs at Easter Road.

Lennon was clearly unimpressed by the slipshod displays by his players as they chase their eighth successive crown, as CQN reported earlier this week.

Now the title kings get ready to go again against Kilmarnock tomorrow afternoon in what is sure to be an emotional occasion in the east end of Glasgow – and Forrest insists he and his team-mates must rise to the occasion.

The Scotland winger, speaking to the Daily Record, said: “It doesn’t matter what manager it is, the last two games haven’t been good enough and he told us that.

“Having worked with him before and now he’s back, you can see he has mellowed a bit. 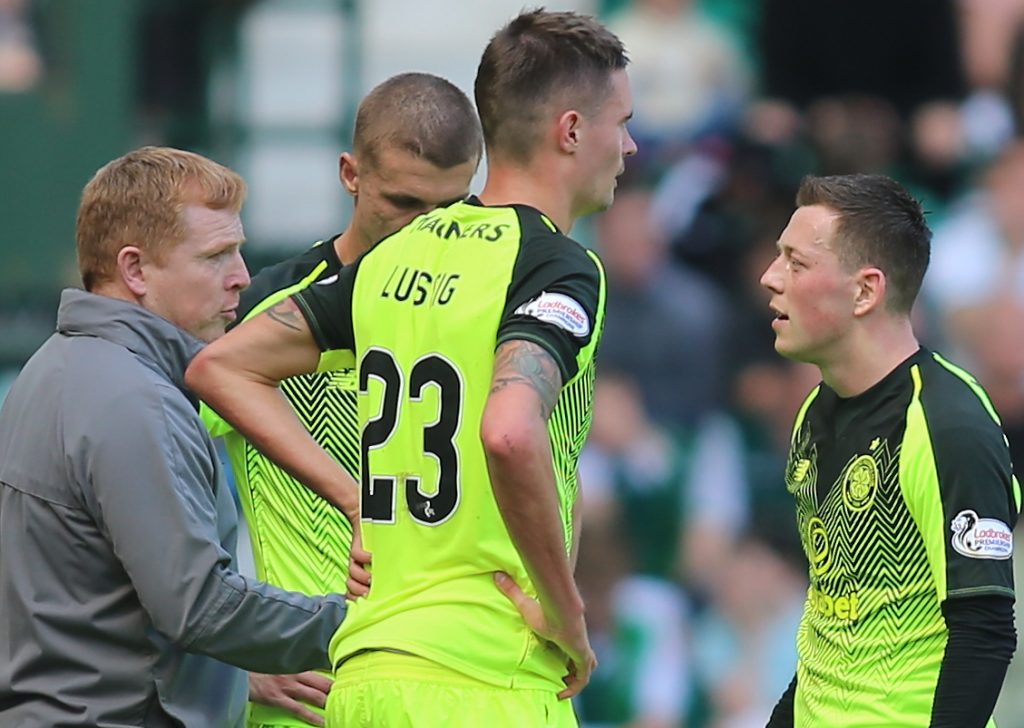 EASTER ROAD TALK-IN…Neil Lennon has a word with Jozo Simunovic, Mikael Lustig and Callum McGregor as two points slip away.

“He has said that himself now he’s older and has more experience. But that hunger is still there and he still demands the performances in training and games.

“He reminded us last weekend he hasn’t mellowed that much. He has standards and if he’s not getting it he will let the boys know.

“The lads will tell you ourselves we didn’t do well enough at Hibs.

“So, on Saturday, we have to put on a performance.”

Forrest is aiming to wrap up Premiership crown No.8 on the bounce and he is determined to make it a special day to celebrate legendary Celt Billy McNeill who passed away on Monday at the age of 79.

The international stalwart added: “He was a huge figure at Celtic and you have seen that from the reaction from everyone.”

Forrest fired in a double as Celtic blitzed Steve Clarke’s stubborn Ayrshire outfit 5-1 at Parkhead in December. An action replay would be a fitting tribute to Billy McNeill.