JAMES FORREST, with a haul of 17 medals in his glittering Celtic career, is looking forward to a first at Hampden next month.

The Scotland international winger, who agreed a new four-year extension with the eight-in-a-row champions last week, is hoping to get the green light to face Steven Gerrard’s Ibrox outfit in the Betfred League Cup final on Sunday, Dcecember 8.

Amazingly, Forrest has NEVER played against the Govan team in a silverware showpiece at the national stadium – he wasn’t in the squad for the 2001 League Cup Final – and he is anxious to get that sorted and another win on his impressive CV.

He played his part in piloting Neil Lennon’s men to the trophy shoot-out as goals from Mohamed Elyounoussi (2), Scott Brown (2) and Callum McGregor shot down Hibs 5-2 on Saturday night in an entertaining semi-final confrontation. .

And Gerrard’s men, who lost 2-0 to the Hoops at home in September, booked their place with a 3-0 win over Hearts yesterday afternoon. 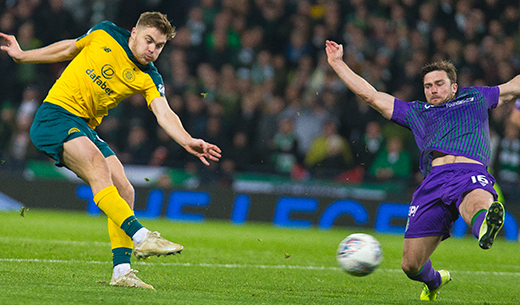 BANG ON TARGET…James Forrest fires a shot at the Hibs goal.

Forrest, speaking to the Daily Record, said: “It will be a tough game, but we’re looking forward to it. In the last few years we’ve played them in semi-finals, but to meet them in a Final is a big one.

“I was in the stands the last time when Rangers won it, but it was a good while ago. I haven’t played against them in a Final so it would be a good one to be involved in.

“It’s a big game any time you play against Rangers, home or away in the Cup.

Celtic have won an incredible 30 knock-out domestic ties in succession and Forrest is expecting an enthralling encounter against their Glasgow neighbours.

He added: “It’s a one-off game and everyone wants to win on the day. The last couple of years the Final has been before Christmas and it has been good for us.

“It’s only four weeks away so everyone will be buzzing. It’s difficult to get to the Final, but in the past we have won it and it has given us confidence for the rest of the season.

“We know it will be tough and we won’t take it for granted.”