Celtic Quick News on News Now
You are at:Home»Latest News»FORREST AIMS TO STOP THE ROT
By CQN Magazine on 28th November 2018 Latest News

JAMES FORREST is determined to help Celtic get over their travel sickness when they take on Rosenborg in their Europa League Group B game in Trondheim tomorrow night.

Remarkably, the champions have not won in FOURTEEN away games in the competition and the on-fire winger believes it is time to rectify that woeful record in the Lerkendal Stadium.

Forrest, who claimed the only goal of a dramatic Champions League qualifier at the same ground 16 months ago, is preparing to stage an action replay against the Norwegian title-holders.

Brendan Rodgers’ men go into the encounter knowing three points are a must if they are to have a chance of playing in European competition after the turn of the year. 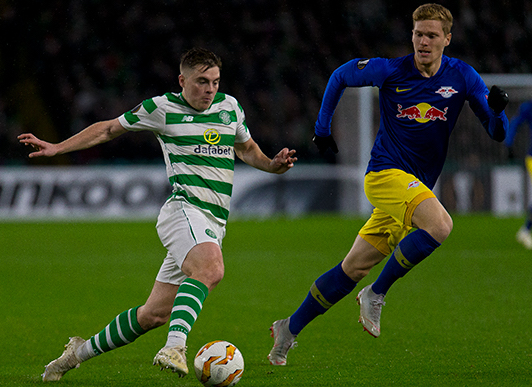 THE RACE IS ON…James Forrest takes on a defender in Celtic’s 2-1 win over RB Leipzig.

The Hoops are level on six points with big-spending Bundesliga giants RB Leipzig following Odsonne Edouard’s winner in the 2-1 triumph in Glasgow earlier this month.

A win tomorrow night would set up Rodgers’ side for the final tie against leaders RB Salzburg in Glasgow on December 13.

Forrest said: “We’ve two hard games left, but we’ll give it our all. Beating Leipzig gives us hope. It was a really good performance against a strong side.

“We knew we had to win that night and we did, which was a positive for us as we try to put on the kind of show we’ll need in Norway.

“We can take confidence from that display and we’re looking forward to this one.

“The manager told us that, even though we were drawn in a really tough group, that getting through it was what everyone at the club wanted.

“Having European football after Christmas is important because it gives the players and the coaches and the backroom staff and the fans a real buzz.”