Celtic Quick News on News Now
You are at:Home»Latest News»FORREST AND THE X-FACTOR
By CQN Magazine on 19th March 2021 Latest News

COMEBACK Bhoy James Forrest could show Celtic fans what they have been missing in the Glasgow derby at Parkhead on Sunday.

The Scotland international made a cameo appearance in the dismal scoreless stalemate against Dundee United at Tannadice almost two weeks ago after being out since sustaining an ankle injury in September.

Forrest, just like the Hoops support, has had to endure an agonising campaign as the team relinquished their grip on the title in their quest for the historic 10 in a row.

The 29-year-old forward, a mainstay in the line-ups of Ronny Deila, Brendan Rodgers and Neil Lennon, is ready to start the third encounter of a calamitous term against Steven Gerrard’s side who were sent packing from the Europa League last night as Slavia Prague overwhelmed them 2-0 at Ibrox where the home team had two players red-carded in a night of shame.

The wide man is up for playing his part in stopping the rot after the side lost the previous two Premiership outings against the Govan club. HOOP HOOP HOORAY…James Forrest and his Celtic team-mates celebrate an Odsonne Edouard (on ground) goal against Steven Gerrard’s side two years ago.

Former Celtic star Simon Donnelly is backing the experienced campaigner to make up for the frustration of five months on the sidelines at the weekend in the midday kick-off.

He said: “It is fair to suggest people don’t realise what they have until it’s gone and I’d say that has been the case over the past few months as regards James.

“It actually goes back to something I talked about earlier in the season when things were being talked about him in terms of his form and I stated that his overall contribution could be overlooked at times.

“James provides goals and assists and, on several occasions, they are assists and goals in big games. I’m talking about semi-finals and finals and European matches.

“If anything, that has been highlighted and re-emphasised during the period when he was out. It’s not to say that’s the sole reason Celtic have stuttered this season. There have been other issues, of course, but it’s been a factor and the fact he is coming back will give everyone at the club a lift.

“James is a real team player and, if you go back through the successful period Celtic have had of late, you look at the likes of him, Scott Brown and Callum McGregor as being constants. These guys have been through all of the success and popped up when it mattered. 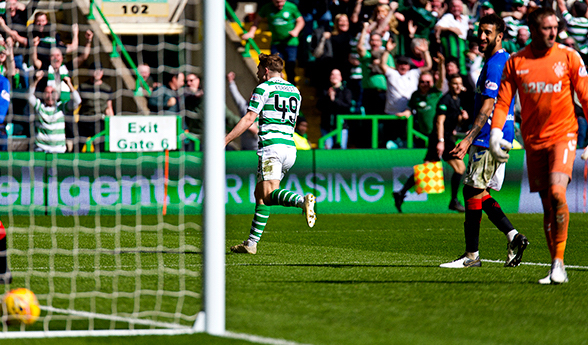 THE WINNER…James Forrest races away after scoring the points-clincher in the 2-1 win in March 2019. Connor Goldson and Allan McGregor do not share his joy.

“James is almost going to be like a new signing when he’s back up to his full speed. Everybody wants a fully-fit Forrest creating chances, running at people, committing defenders and making space for others.”

Donnelly, speaking to the Daily Record, added: “If there are going to be changes at the club in the next few months and a turnover of players, you are looking to guys like him who have been over the course.

“If there are a lot of players coming in you still need that nucleus who know what it takes to be at Celtic. James is one of them.

“He’s come right through the ranks to establish himself as a major player in the club and that’s the type of person you need, even if there is a lot of change coming.”