JAMES FORREST reckons Scott Sinclair can use Thursday’s Europa League Group B encounter against RB Salzburg as a launch pad for the rest of the season.

The English attacker has been a bit-part player since the start of this campaign, but he hit the headlines with his cheeky back-heeled winner against Aberdeen at the weekend.

Sinclair came on as a first-half substitute for Odsonne Edouard who had been battered by Scott McKenna in an outrageous high-flying challenge referee Bobby Madden didn’t deem worthy of a foul.

Forrest said: “I was absolutely delighted for Scott when he scored and you could see the full team was.

“We know what he can do and it is important to have him back and scoring and you could see from the celebration that everyone was buzzing for him. You saw him and his celebration. He was emotional.

“In football, there isn’t a player who hasn’t had that at some point in their career. There are ups and downs along the way and it is how you come back. Every time he plays, he is a threat and coming on on Saturday and scoring will do him the world of good.” 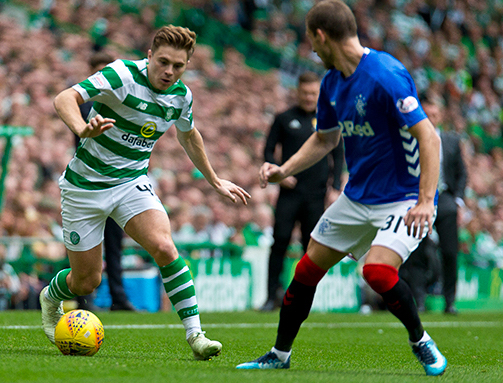 ON FIRE…James Forrest in action during the 1-0 win over Sevco.

Sinclair has struggled this time out to come anywhere near his debut term following his £4.5million switch from Aston Villa.

The 29-year-old left-sided raider made an immediate impact at Parkhead at the start of the Brendan Rodgers’ revolution.

The one-time England international scored 25 goals and added 11 assists. He followed that up with 18 goals and 17 assists, but Sinclair hasn’t hit the ground running in his third year at the club and has claimed only two goals from six starts.

Forrest added: “The competition for places helps you and the game last season against Bayern Munich at Parkhead was unbelievable for me. We were unlucky not to get something, losing 2-1, but they are the big games we all want to play in and you need to impose yourself on these occasions.

“You can be positive and do something special and Scott’s goal at the weekend was really good. But even a wee lucky goal or a deflection is equally welcome and it can do you the world of good, as well.

“Scott is positive and a real threat going forward. You can see that with the amount of goals and assists he has had in his last two seasons.”