CELTIC have three options to reach the Europa League knock-out stages – a win or a draw against RB Salzburg at Parkhead on Thursday night OR if RB Leipzig fail to beat Rosenborg.

The Bundesliga big-spenders are three points behind Brendan Rodgers’ side going into the final encounter and can’t afford to slip up against the rock-bottom Norwegians.

However, on-fire Hoops winger James Forrest is in no doubt the Scottish champions will need to be firing on all cylinders to get the required result against the Austrian visitors who have already qualified with a 100 per cent record, including a 3-1 victory over the Celts in October.

The Scotland international raider, who took his campaign’s goal tally to 11 with a dazzling double in the 5-1 rout of Kilmarnock at the weekend, insisted: “We know it is going to be a hard game and it will take a big push from everyone. 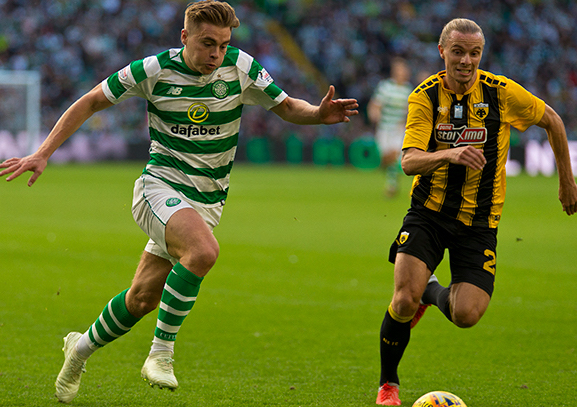 ON FIRE…James Forrest speeds past an AEK Athens defender.

“We would have taken it being in our own hands going into the last game.

“Of course, we know Salzburg are a top side and everyone is going to be at it on the night to make sure we get through.

“Everyone is going to have to put in a big performance on the night.”

Forrest will also be looking for personal revenge after being red-carded in the defeat in Austria.

The Hoops set up a Group B grand finale after beating RB Leipzig 2-1 in Glasgow, where Odsonne Edouard claimed the winner, and Rosenborg 1-0 away with Scott Sinclair on target following s superb cross from Forrest on the right.