JAMES FORREST admits Celtic are on a Europa League tightrope when they face RB Leipzig at Parkhead tomorrow night.

And the Scotland international winger reckons the Hoops do not have a safety net in their bid to qualify from Group B following two back-to-back defeats against RB Salzburg and the Bundesliga outfit.

Brendan Rodgers’ team are third in the section with three points from three outings, with their solitary win coming against Rosenborg in Glasgow when Leigh Griffiths snatched the only goal of the confrontation late on.

Forrest said: “There’s no margin for error now. We have two home games left in the group and we know they will be important. We need to pick up points if we want to progress.

“The last two results away from home against Salzburg and Leipzig have been disappointing, but we still have the opportunity to put it right.

“We want to progress in Europe and it’s not beyond us to get out of the group.

“We need to win our home games and maybe pick up something away to Rosenborg, as well. And we are capable of doing it. 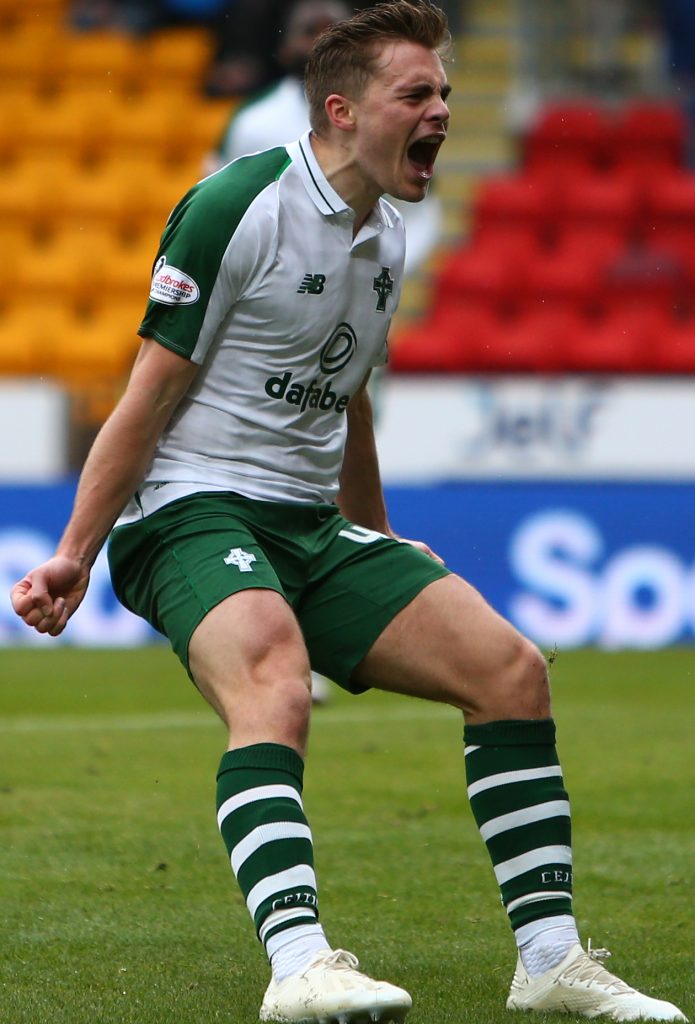 AWAY DAZE…James Forrest celebrates one of his four goals against St Johnstone in Perth last month.

“We have got the players in the squad who can achieve it, but we need to turn up on both nights.

“Of course, it’s going to be hard against top sides, bur we have got the quality.”

Forrest, who has banged in seven goals in his last four appearances, missed the 2-0 defeat in Leipzig a fortnight ago following his red card in Austria in the 3-1 loss against RB Salzburg.

The in-form attacker admitted: “It was a weird feeling watching it on the telly.

“Obviously, it was frustrating. I am not really used to being suspended. I got a red card in my second season at Celtic under Neil Lennon and I maybe sat out one game.

“So, it was strange and, hopefully, I won’t experience it again. It’s far better to be playing than stuck watching on the television.

“You do look closely, though. When you are not playing you watch those involved and pay close attention to the guys in your position and who you may be up against. Everything helps.”