The £10million French ace scored the opening goal with a fabulous solo run and set up the 86th-minute points-clincher with a neat pass into the tracks of the Scotland international winger who tucked it away neatly beyond the exposed Allan McGregor.

Forrest reckons Edouard, who arrived for a Hoops record transfer fee from Paris Saint-Germain in the summer, proved again why he is the big man for the big occasions.

Delighted interim manager Neil Lennon branded the performance from the 21-year-old powerhouse as one of the best he had seen in a Glasgow derby.

Having struck three times in two games against the Govan outfit last season, Edouard repeated the goalscoring feat yesterday when he galloped onto a sublime first-time pass from Forrest and tricked and teased his way beyond the struggling duo of Connor Goldson and Joe Worrell before thumping an unstoppable left-foot effort past the motionless and flummoxed McGregor. 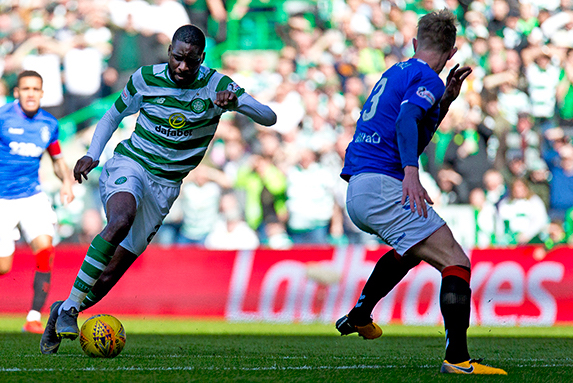 It was the goal that set in motion the champions heading for the triumph that eased them 13 points clear at the top of the Premiership with the eighth title in a row beckoning in the near future.

Forrest, speaking to the Daily Record, said: “Odsonne scored the goal then set up mine. He has scored in a few of these games and the manager said afterwards it was one of the best Old Firm performances he’s seen.

“He was holding the ball up and contributed really well. You need your striker to be on top form in these games and he was tremendous.

“You could see last season when he came in that he is so chilled. Nothing fazes him.

“Once he gets the ball at his feet, he can bully defenders and it was a great performance from him.”

After failing so abysmally at Ibrox before the turn of the year, Forrest admitted he took three months of sheer frustration out Gerrard’s side with his winner. 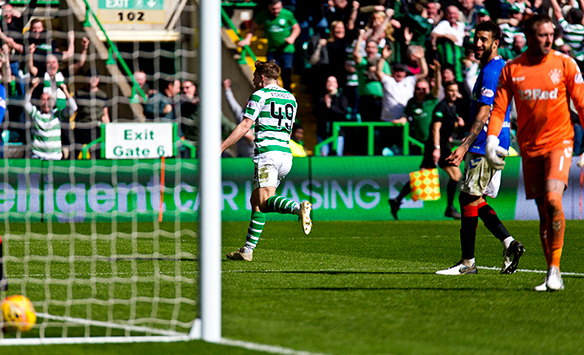 NUMBER TWO…James Forrest races away after scoring the second with Connor Goldson and Allan McGregor getting that sinking feeling.

He added: “After the last one it hurt even more because we didn’t have a game for a good few weeks. We were still hurting in Dubai and that is why since we’ve come back we’ve done well.

“Everyone felt it, but you don’t want to keep talking about it because it will get you down.

“Our intensity in the first half was good, the only disappointment was we didn’t get more goals.

“Rangers got a bit of confidence from the fact it was 1-0 and we played better when we also went down to 10 men.

“We showed our character to come through it and the manager said it’s a massive step for us.

“That’s us 13 points clear and he keeps saying we want to wrap it up as soon as possible.

“Hopefully, we can play with a bit more freedom as we’ve maybe not been at our best in the last few games.”