Celtic Quick News on News Now
You are at:Home»Latest News»FORREST: NO GO TO £12m SWITCH
By CQN Magazine on 12th August 2019 Latest News

CELTIC will tell Zenit St Petersburg they have NO chance of landing James Forrest if they pursue their £12million interest in the winger.

Reports in the media suggest the Russian giants are poised to splash the cash for the Scotland international before the European transfer deadline at the start of next month.

Apparently, Zenit are willing to pay the 28-year-old Scotland international a whopping £70,000 to take the same route Aiden McGeady took in 2010 when he was lured to Spartak Moscow in a £10million switch.

However, Forrest will be staying put as a key member of Neil Lennon’s first team squad as the Hoops enter a crucial campaign at home and abroad with nine successive titles on the radar.

The prolific forward, who was on target during the club’s 5-2 victory over Motherwell at Fir Park on Saturday, is under contract until 2022 and has previously stated he wants to remain at Parkhead for the remainder of his career, as CQN reported. 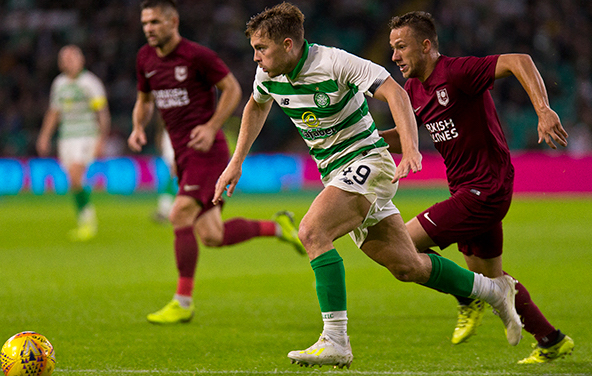 Only last week, Forrest, speaking about the possibility of an extension, admitted: “I would love to get it done soon and just concentrate on football. Nowadays you don’t get many one-club players, but there’s not many clubs like Celtic.”

Lennon emphasised: “He wants to extend his contract which is great.

“He’s a top, top player. He’s been brilliant. From the day I first saw him until now, over that 10-year period he’s been magnificent for the club.”

Forrest will line up alongside his Celtic team-mates against Cluj tomorrow night as Lennon’s men attempt to reach the Champions League play-off stages after last wek’s 1-1 draw in Romania.

Slavia Prague await the winners as the Hoops aim to reach the group sections for the third time in four years and make up for last season’s devastating disappointment of losing out to a mediocre AEK Athens.

Forrest will be playing his part in that quest.