JAMES FORREST emphasised the importance of his four goals against St Johnstone in at McDiarmid Park in October while Celtic plan to stage an action replay this afternoon.

Eleven days earlier, the Hoops toiled at the same venue to overcome the Perth outfit in the Betfred League Cup.

Leigh Griffiths popped up with the only goal of the game late on to pave the way for the holders to go on and lift the silverware for the third successive to open up the possibility of a treble treble.

When they returned to the same venue it was an entirely different story as a whirlwind opening 45 minutes blew Tommy Wright’s side to pieces – with Forrest firing in a four-goal salvo.

The Scotland international winger said: “Everything just clicked that day.

“It was good because going into that game we had been struggling to score goals.

“We were creating chances, but not putting them away, so that game set us off on a good wee run.

“It was good for me personally and that win gave everyone some confidence.”

That belief has been even more evident since the champions returned from the winter break to hit the ground running with four successive home triumphs, 12 goals scored and none conceded. 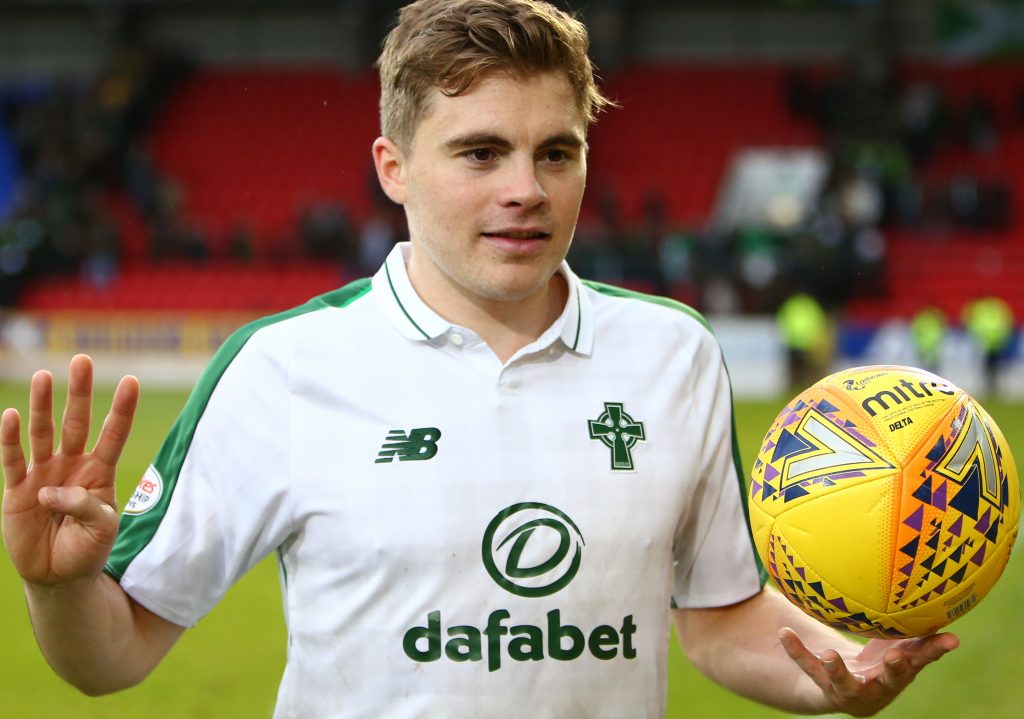 FORREST TO THE FOUR…jaunty James after his solo effort against the Saints in October.

Their latest triumph was a 2-0 victory over the same opponents as brilliant strikes from Callum McGregor and Ryan Christie eased Brendan Rodgers’ side six points clear at the top of the Premiership.

Rangers, with the aid of four penalty-kicks, pulled that back to three with a 4-0 success over rock-bottom St Mirren yesterday, but the Hoops can restore that six-point advantage today.

Looking back at the midweek win, Forrest added: “We have had that game in hand since the League Cup Final.

“It has always been there, but the manager said it was important that we made a statement by getting a good result.

“But we still have 15 games to go in this campaign and we need to make sure we’re at it right up until the end of the season.

“We obviously have plenty of experience of being in front.

“But every team we play, home or away, is making it hard for us and that’s why the league is tighter this year.

“We have been right back to our best the last few games, scoring goals and keeping clean sheets, but we really need to look to keep that going for the rest of the season.

“The manager is really good in that situation, though. At half-time on Wednesday, he was really composed.

“It was 0-0, but he said he was happy with how we were playing, he didn’t want to put us under pressure and he felt that if we kept going we would create enough chances.”

So, Celtic go into the 12.30pm kick-off looking for their fourth win on the spin against the Perth outfit with a record of nine goals scored and none conceded.

*Don’t miss the unbeatable match report and action images from St Johnstone v Celtic this afternoon – only in your unbeatable CQN.