The Scotland international winger, who claimed four sparkling goals in a devastating first-half display, insisted the Perth outfit got off lightly.

Brendan Rodgers’ side were already 5-0 ahead when Danny Swanson was rightly ordered off two minutes after the turnaround for a reckless lunge on Forrest.

It looked as though Saints keeper Zander Clark was about to face a torrid 43 minutes against a ruthless set of players determined to shut up their critics.

However, the visitors were content to settle for six when Callum McGregor knocked in a late effort to add to the haul from his unstoppable team-mate and a single from £9million man Odsonne Edouard.

Livewire Forrest said: “Did we think we could have scored 10? Definitely, going into half-time I felt we had more chances in it. In the last few games, I feel that we have been creating more chances.

“Half-time came at the wrong time for us. Once St Johnstone went down to 10 men it made it harder to break them down.

“The manager had told us to go out and try for more, we got one which was good and that was reward for keeping going.” 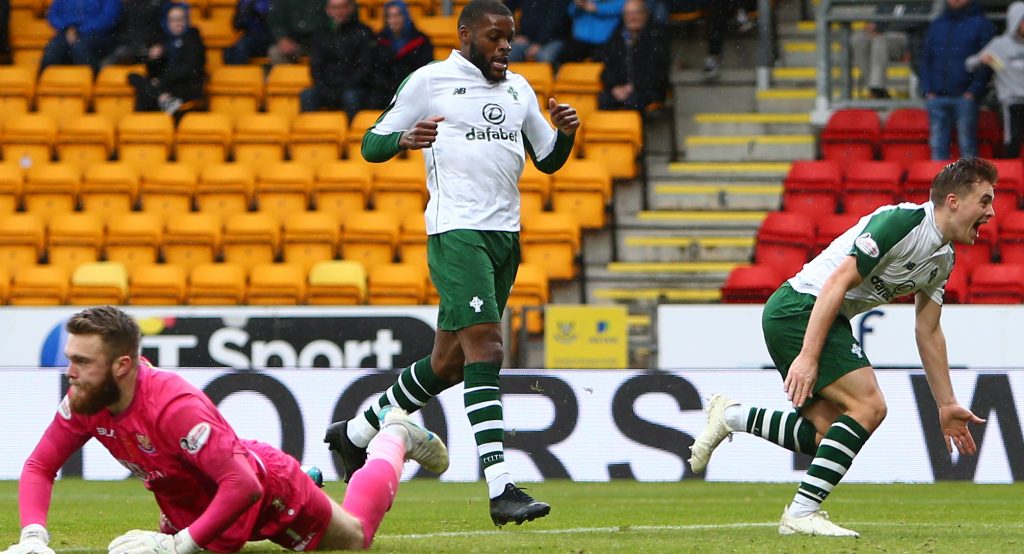 TWO DOWN AND TWO TO GO…James Forrest races away after sliding Celtic’s third goal behind Saints keeper Zander Clark. Olivier Ntcham is about to add his congratulations. Pic: Geo.

Forrest added: “This was the boost we wanted going into the break and it’s credit to the boys for sticking together. We have had a few difficult games in the last few weeks.

“We have Hibs and Hearts when we come back from the international break, so they are all hard games.

“We just have to make sure we stay at the top of our game. You can talk about the last two seasons, but we have not started the same this time.

“But we have always had the confidence in the changing room that if we keep working hard then it would change.

“We are slowly, but surely, getting there. Six goals, a clean sheet and a few different players scoring, as well, is what we were looking for.

“It helps everyone in the team when you get results like this.

“I think it’s the first time we have scored more than three goals this season.

“We have set the marker again now, we just have to kick on and continue this.”

* FOR THE RECORD: Forrest is the first Celtic player to score four goals in an away game since Maciej Zurawski achieved the feat against Dunfermline on February 19, 2006 with a devastating 30-minute first-half display as Gordon Strachan’s side won 8-1.