JAMES FORREST hopes to switch from goal-maker to goal-taker when he lines up for Scotland in the Euro 2020 qualifier against Kazakhstan on Thursday afternoon.

The lively attacker caught up with his international team-mates shortly after setting up Celtic’s stoppage-time winner against Dundee at Dens Park with a neat cutback for Odsonne Edouard to drill in the points-clincher.

Now Forrest’s focus is on his country as they prepare to kick off the competition in Astana and he aims to play his part in the tie against San Marino on Sunday.

The 27-year-old Hoops ace was the star of the show in November last year when he netted a blistering hat-trick against Israel in the Euro Nations tie at Hampden as Alex McLeish’s men topped their section with a 3-0 win.

Forrest, speaking in the Daily Record, said: “You want to play in big games and the last time we went away with Scotland it was really positive.

“When you are a player you want to be in the squad and then you want to play and help the team. We have a couple of big games coming up and we want to do well.”

Forrest will return to club action once the Euro double-header has been taken care of with the Scots, hopefully, returning with six points in the bag. 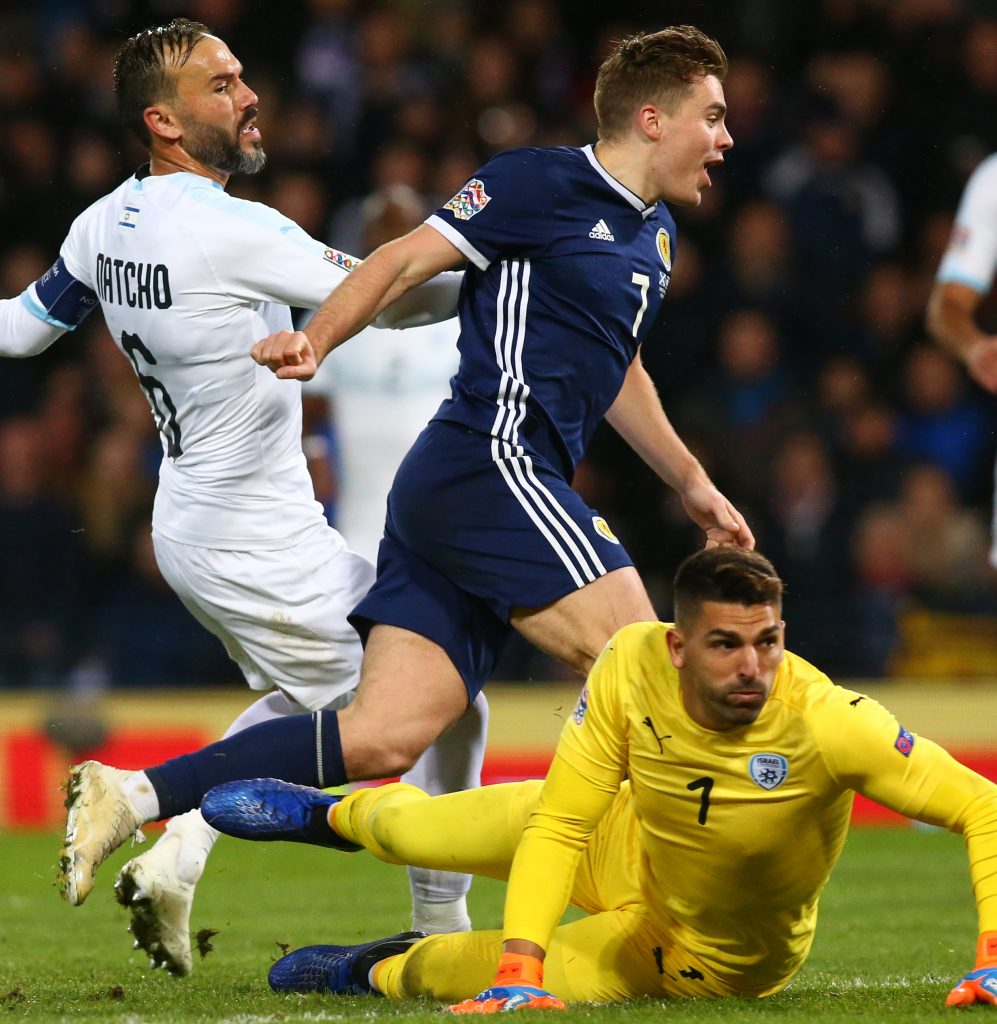 HAT-TRICK HERO…James Forrest completes his trio against Israel at Hampden in November.

Next up, of course, is the Premiership confrontation with Steven Gerrard’s Ibrox outfit in the east end of Glasgow on March 31 when the champions have the opportunity of moving THIRTEEN points clear as they get to within touching distance of their eighth successive crown.

Reflecting on the late drama on Tayside, Forrest added: “We didn’t play our best, but we kept going and it’s credit to the lads we got the winner right at the end.

“We know it’s hard coming to Dundee, they’re fighting for their lives, but we wanted the three points and we dug in and we’re buzzing.

“The manager said at half-time that he’d take a last minute goal. We had half chances, but it shows the resilience of the boys that we kept going and managed to get the goal at the end.

“Odsonne has done well to slip me in, he’s gone for the return and it’s a cool finish. It was really important and he stayed composed.

“You can get frustrated when things aren’t going your way, but we kept going and it’s a big boost for the changing room.

“The manager said it was vital to get the three points, so we go into the international break happy and we can come back buzzing and ready to go again.

“Teams aren’t going to make it easy for us, we’re going to have to go out there and win it and not just hope to get over the line. We want to get there as quickly as we can.”