ON-FIRE James Forrest has Israel in his sights as he aims to make up for lost time with the Scotland international team.

The Celtic winger walloped in two memorable goals in the 4-0 dismantling of Albania at the weekend – his first strikes for his country in his 25th appearance, as reported in CQN on Saturday,

And now the Israelis, tomorrow night’s visitors to Hampden for the crucial UEFA Nations League encounter, are next in line to deal with the goal threat of the prolific Hoops ace who has also claimed nine goals for the champions.

Forrest said: “Saturday was definitely up there. Scoring for Scotland in a competitive game was special. It will give me confidence that I can score more going forward.

“It was a great feeling. I’ve played a few times for Scotland before and I haven’t scored. I was pleased that my goals helped us win. It was a great performance.

“It’s taken a while, but you just try not to think about it. You always hope you get chances. I’ve had chances in games before. I’m just glad I got on the scoresheet.

“I just want to win as many caps for Scotland as possible and be as successful as I can.

“I was absolutely delighted. It was a great night. To win my 25th cap, score two goals and contribute to the win was amazing.

“Hopefully, we can take it on to the Israel game. When you’re playing with confidence things come off.

“But I just want to contribute to the team. You know you’re playing with good players and you will get chances.

“I have taken a couple and now I just want to get as many as I can.” 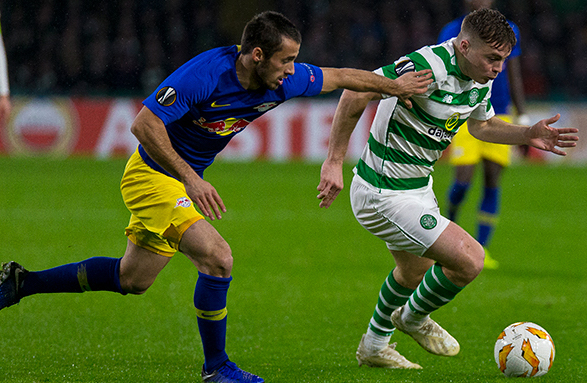 ON FIRE…James Forrest races away from a German defender in the 2-1 win over RB Leipzig.

Forrest, who thumped in four in a sizzling half-hour spell in the 6-0 triumph over St Johnstone in Perth last month, said: “Even at the start of the game, I thought we could score. We started really well and had chances even when they had 11 men.

“When a team goes down to 10 men sometimes they can sit back and make it hard for you. It can go the opposite way. But we played in a very attacking way. We scored four and could have had more.

“We had a lot of runners from middle to front. We had a lot of players who play in a similar way for their club sides. That did help. Everyone knew the system. It worked really well.

“We just need to make sure that we don’t take it for granted against Israel. We will start again.”

The Scots gaffer went with one wide player and Bournemouth’s Ryan Fraser, who opened the scoring on Saturday, got the nod on both occasions.

Thankfully, McLeish changed the formation this time around and Forrest responded in magnificent fashion.

Forrest added: “Every time you go away with Scotland, you want to impress in training. The same is true when you are playing with your club side. You want to play well and play for your national team.

“When you get your chance you want to take it because there are a lot of good players playing at a good level. If I can keep performing well and scoring goals, hopefully, I can stay in the team.”

The bad news for the Israeli rearguard is that there is no chance the Parkhead punisher will miss tomorrow night’s confrontation.