FRASER FORSTER is positive Celtic fans will see the real Mohamed Elyounoussi in the forthcoming months.

The Norwegian international striker, like the skyscraper keeper, was out in the cold at Southampton before agreeing a season-long switch to the Hoops in the summer.

Elyounoussi struggled for game time at the Premier League outfit after they paid £16million to sign him from Basel in June last year.

However, Neil Lennon has shown faith in the 25-year-old forward by selecting him for the recent Europa League Group E encounters against Rennes in France and Cluj at Parkhead on Thursday night.

The frontman scored the second goal after robbing a Romanian opponent of the ball in his own half, sending James Forrest on his way with a neat forward pass and was there to finish off the move when the winger picked him out with an excellent cutback.

The deflected strike turned out to be the killer goal in the crucial 2-0 win and Forster, who made a couple of vital stops on the night, was delighted for his colleague. 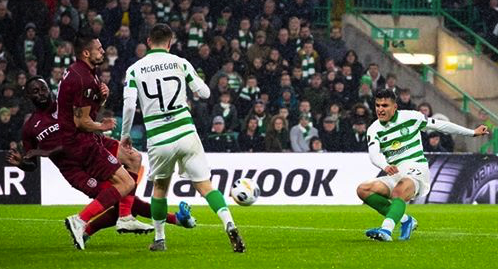 BREAKTHROUGH…Mohamed Elyounoussi thumps in the second goal against Cluj – his first for the Hoops.

The giant shotstopper, speaking to the Sunday Mail, said: “I was so pleased for Mo. You talk about having tough years, it’s been hard for him, too – and his goal against Cluj will do him the world of good.

“He was brilliant and it can only boost his confidence. It helps the team to know we have players like him who can come in and make an impact.

“‘He is a fantastic technical player, great touch and ability.

“He probably doesn’t have the same pace that James Forrest brings on the other side, but he has fantastic attributes and he  has done it at international level over the past few years.

“The run of games will do him good and I’m sure he will build on what he did.”

Now Elyounoussi will be hoping to take that form into today’s High Noon showdown with Livingston in Lothan.

He is still looking for his first league goal for the Hoops and he aims to rectify that against Gary Holt’s resolute outfit as the champions zero in on three points after last week’s hiccup at Hibs where they failed to win for the first time in eight games.

* DON’T miss the unbeatable match report and best action images from Livingston v Celtic this afternoon – only in your champion CQN.