NEIL LENNON will explore every financial avenue and ask for the Celtic board to do everything in its power to keep Fraser Forster at the champions.

The towering keeper, on loan from Southampton until the end of the season, was immense as the club won their TENTH consecutive domestic honour with their Betfred League Cup success at Hampden on Sunday.

Forster was unbeatable as he repelled Steven Gerrard’s team and capped a heroic performance with his diving save from Alfredo Morelos’ penaltykick only three minutes after Christopher Jullien’s breakthrough goal on the hour mark. 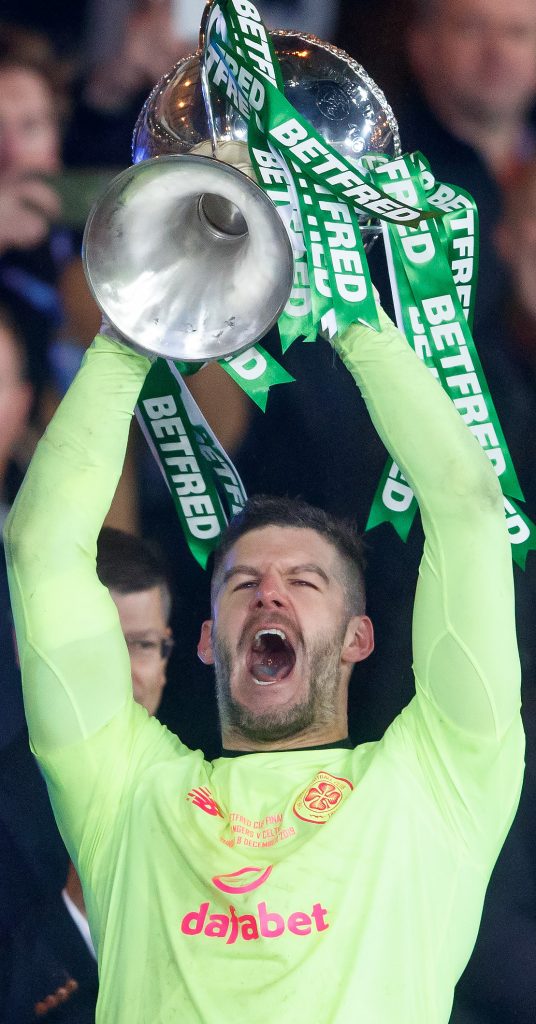 An equaliser at that point – with the Hoops down to 10 men following Jeremie Frimpong’s red card – could have been critical to the outcome of the confrontation that would have gone to a gruelling extra-time period in wet, windy and stamina-sapping conditions if it had remained deadlocked after 90 minutes.

Lennon, who signed the 6ft 7in shotstopper for a bargain £2million from Newcastle first time around in 2012, has admitted he is anxious to hold onto the England international.

A major stumbling block is Forster’s wages – reported to be in excess of £70,000 per week – but the Hoops boss wants Parkhead powerbrokers to explore the possibility of signing the No.1 on a permanent contract.

The Hoops gaffer, speaking to the Daily Record, said: “It’s about affordability. That’s something we can talk about. I’ll talk to the player, but first we have to make the call to Southampton and I’ll need to speak to Peter (Lawwell) about that.

“Is it beyond us? I don’t know. Would I love to do it? Of course, but we have to be realistic at times and we can’t go overboard either.

DOUBLE DELIGHT…Fraser Forster and Neil Lennon with the newly-won silverware.

“We have to be prudent, but we have him right now and it’s fantastic because he’s definitely made us better.

“He’s not our player, obviously, and that’s a discussion we’d need to have with Southampton.

“He’s better now than he was before and I certainly think Gareth Southgate should have a look at him. He’s been unbelievable. He’s more mature.

“He just wasn’t getting beat yesterday. He was absolutely remarkable and to do that in the context of a Final, speaks volumes for his talent.

“So, yes, I think he should be looked at regarding England and, yes, we have to see on the other question.”