CELTIC legend Davie Hay reckons the Hoops’ fabulous French Connection will “blow away” the opposition in the new season.

The former Parkhead manager and player has been massively impressed by Moussa Demble, £9million man Odsonne Edouard and Olivier Ntcham in their Champions League qualifiers against Alashker.

Hay said: “The best strike-force I worked with in my time as Celtic manager would have been Maurice Johnston and Brian McClair.

“They were different strikers in terms of their game, but together they scored an absolute load of goals. 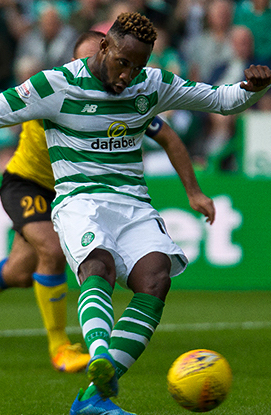 SPOT ON…Moussa Dembele nets his penalty against the Armenians.

“Of course, it is ridiculously early days and I am not making any comparisons before anyone gets the wrong idea, but I think it is exciting to look at the partnership that is blossoming between Odsonne Edouard and Moussa Dembele.

“They seem to have a natural telepathy on the pitch and it looks like the beginning of an exciting relationship between them.

“I’m not sure that they will always be paired together for European games when there is a need to be disciplined and tight at the back, but I do think it is a combination that we will see domestically.

“There were a few draws clocked up last season, but I’ll say right now that if these two are fit and playing together then I think they will blow teams away in the league.

“They really do have the potential to be a formidable duo and I also thought that Olivier Ntcham looked the part against Alashkert this week, too.

“He looked in great condition, had a lot of nice touches on the ball and you have to think that Celtic look in pretty good shape as they look to kick on and get themselves back into the group stages of the Champions League.” 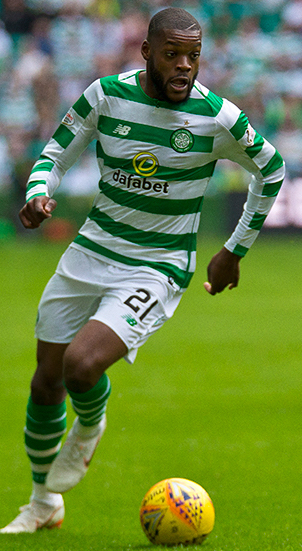 ON THE BALL…impressive midfielder Olivier Ntcham.

Rosenborg are the second hurdle for Brendan Rodgers’ men and they travel to Glasgow for Wednesday showdown in the knowledge they forced a goalless stalemate on the same ground a year ago.

However, they were undone by a wonder goal from James Forrest in Trondheim as the Hoops marched through to the next stage of Europe’s elite tournament.

Rodgers has already admitted he believes his squad is in better shape than at any time in his two seasons in charge.

They have replaced him with Rini Coolen whose last job as a manager was in 2015 when he had a six-week stint as boss of the Aruba national team.