Celtic Quick News on News Now
You are at:Home»Latest News»FROM GRAVEYARD OF HOPE TO FIELD OF DREAMS – HOW BRENDAN RODGERS TRANSFORMED HAMPDEN
By CQN Magazine on 14th April 2018 Latest News

BRENDAN RODGERS has helped transform Hampden Park from a hoodoo ground to a national treasure for Celtic inside two seasons.

Under Ronny Deila, the Hoops failed to progress in three domestic semi-finals – two in actual play in controversial circumstances and one on penalty-kicks.

Rodgers, who took over within a month of that dismal display against the Ibrox Championship outfit, has changed the mindset of his players to such an extent the champions travel to Mount Florida tomorrow afternoon looking for their seventh successive victory.

In the League Cup last season, Moussa Dembele struck to knock out the Govan side and the French Under-21 hitman struck again in the 3-0 win over Aberdeen in the Final with Tom Rogic and James Forrest also on target.

In the Scottish Cup, Callum McGregor and Scott Sinclair did the damage against the Ibrox team in a 2-0 success in the last-four encounter and Stuart Armstrong and Aussie playmaker Rogic downed Aberdeen 2-1.

LEAGUE CUP HERO…Moussa Dembele netted the winner in the semi-final against the Ibrox side last season and claimed two in this term’s 4-2 victory over Hibs.

This time out, Neil Lennon’s gutsy Hibs side were beaten 4-2 in the League Cup semi-final with Dembele (2) and Mikael Lustig (2) seeing off the challenge from Edinburgh.

James Forrest and Dembele, from the penalty spot, were the marksmen in the 2-0 victory over Motherwell as the trophy was retained.

Now Graeme Murty’s team are in the sights of the Hoops manager and his players as they edge ever closer to a sensational and unprecedented back-to-back treble.

Rodgers, whose team have been practising penalties throughout the week to cover all eventualities, is hoping to celebrate once again at the national stadium following his 10th game against their Glasgow neighbours, winning seven and drawing two of the previous encounters. 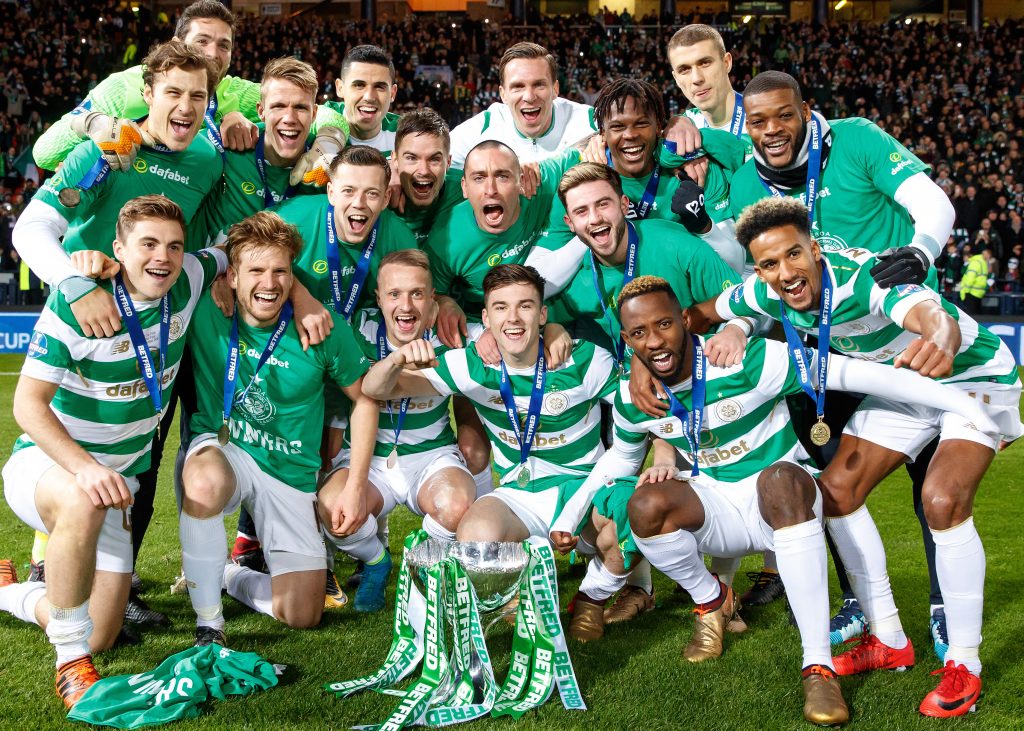 “I think it was just a mental issue, so it was about dealing with it from a mental perspective.

“If you are going to be successful and win trophies, then you have to play well at Hampden.

“You can’t guarantee that you will win every one, but you have to go there with the mindset to win.

“You can’t blame a poor atmosphere, or say it’s not quite right for a national stadium. That doesn’t matter. There are two goals and nice green grass and you’ll have half the stadium full of your great supporters. So enjoy it.”

Last month, Murty’s men led twice in the Premiership fixture, but lost 3-2 to a Celtic side playing with 10 men for over a third of the game after Jozo Simunovic’s red card.

Tomorrow, though, Rodgers hopes his team can underline their derby dominance by making it 10-in-a-row without defeat. 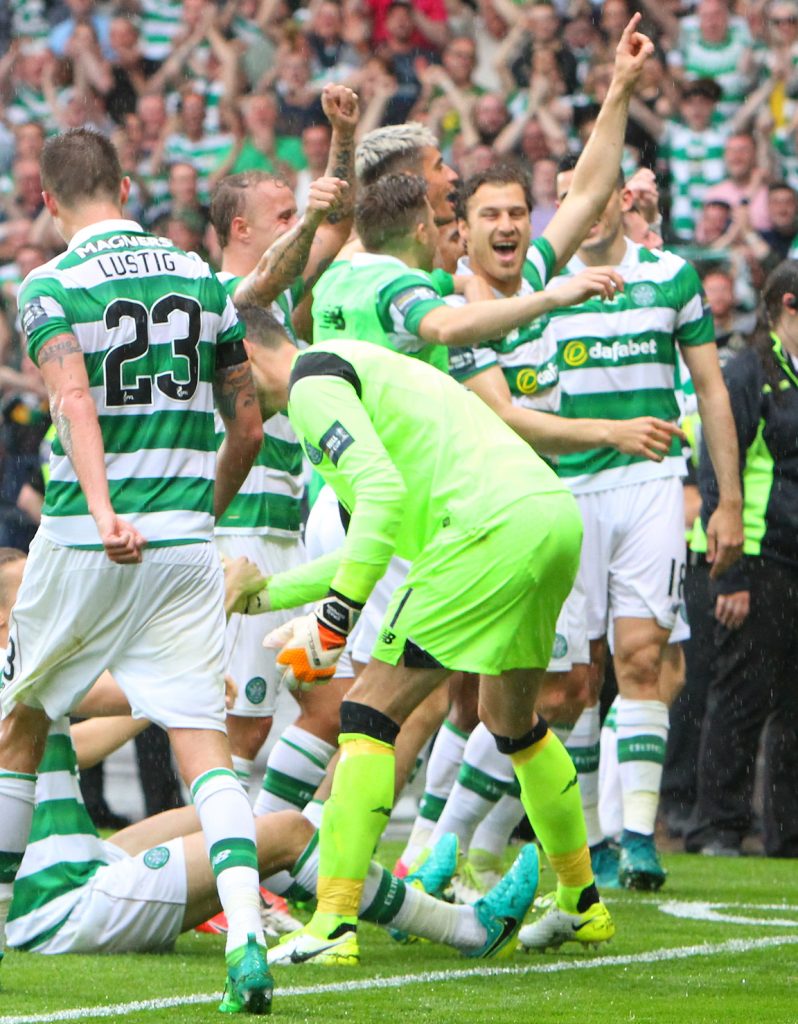 He added: “Every time we play Rangers everyone talks about the gap. I have heard that since I have been up here.

“Before the last game at Ibrox, every headline was that this was the big opportunity for Rangers – but we’ve had that since a few games back.

“We were there in the Scottish Cup semi-final last year and then a week later it was going to be in the league.

“So, I don’t tend to think so much about what their thoughts will be. We have played nine times. You are not going to win every game 5-1.

“We won 2-0 in the Scottish Cup semi-final last year and we murdered them. The week later, we won 5-1, but we had actually played better in the 2-0 win.

“I equate it to us playing Bayern Munich at home. We played well, but lost 2-1. It was a good game, a close game. But I wouldn’t turn around and say we were much closer to them.

“Up here, when you get the chance to play teams sometimes six times in a season, you would think, just by nature, that at times you will be closer.

“But what was impressive in our last result – and Graeme Murty actually mentioned it – is that they may not have had a better chance to win the game, having been in the lead twice and then playing for the last half-an-hour against 10 men.

“So, if we play well we have faith – and we have the evidence to show it – that we have a greater chance of winning.” 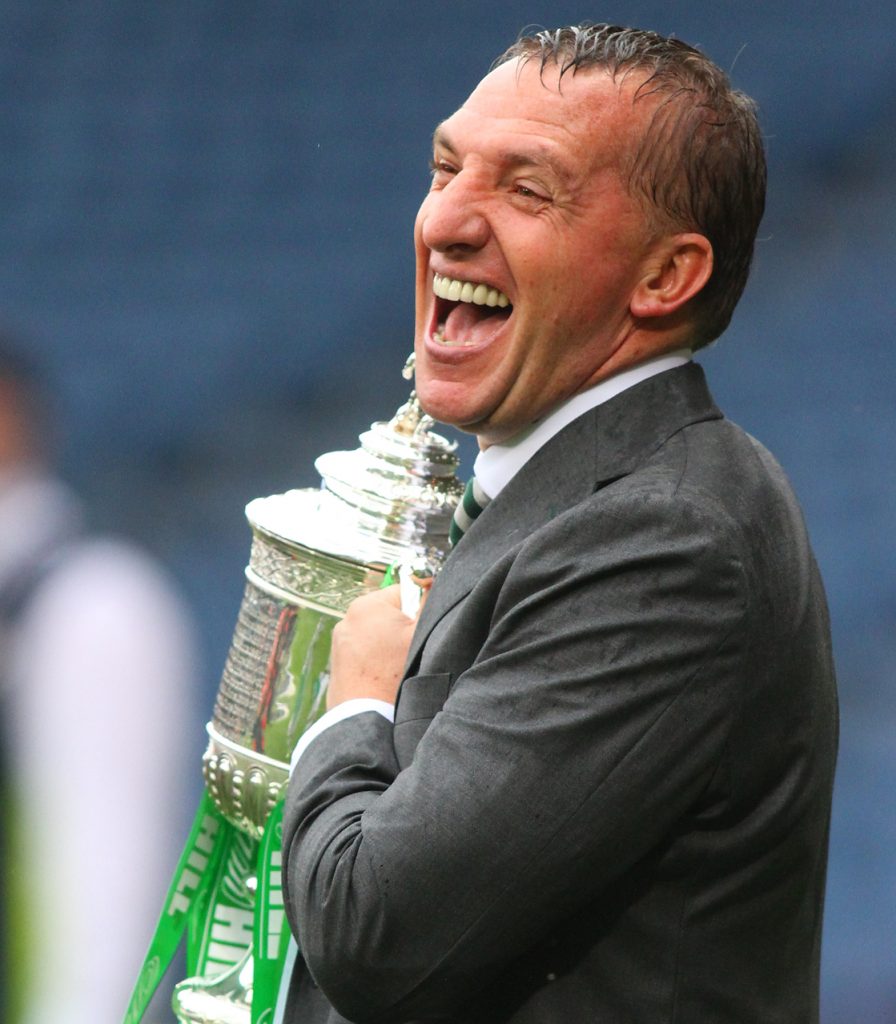