Celtic Quick News on News Now
You are at:Home»Latest News»FROM PARIS TO PARADISE – AND WHY EDOUARD IS SO HAPPY
By CQN Magazine on 5th November 2018 Latest News

ODSONNE EDOUARD has swapped Paris for Paradise – and he admits he is loving every minute of it.

The striker cost a club record £9million when he agreed to join in a permanent basis in the summer following his initial loan deal the previous campaign.

Edouard, 20, convinced boss Brendan Rodgers to splash the cash and lure him on a four-year contract from Paris Saint-Germain.

The skilful frontman is repaying his gaffer with some excellent displays and stunning goals such as his opener in the 5-0 win over Hearts at Parkhead at the weekend.

The French Under-21 attacker collected a pass from Scott Sinclair, bamboozled defender Peter Haring with a quick shimmy on the edge of the box before belting an unstoppable effort into the net via the underside of the crossbar leaving keeper Zdenek Zlamal flapping at thin air.

The youngster added another before the interval – adding to Filip Benkovic’s first goal for the Hoops – and James Forrest and Ryan Christie brought the curtain down on a five-star performance.

Edouard said: “It is just over a year now since I signed for Celtic and I am feeling really happy.

“Of course, it is difficult to be without my family, but that is a risk you need to take in life and in football if you want to follow your dreams.

“That was a risk I had to take when I chose to come to Scotland and I feel as though I have grown up as a person because I did it.

“Life without football isn’t really possible for me. I do lots of things when I’m not playing, but it is really all about when I am playing football. That’s all that counts. 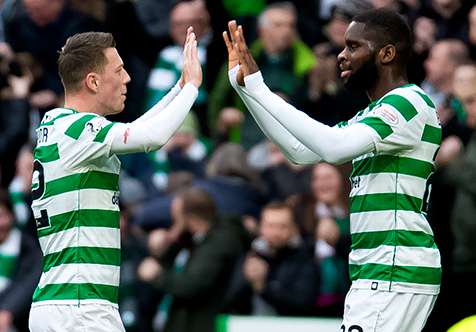 “Within the dressing room, I get on well with everyone. I have lots of good friends in there. I’m a good guy!

“And I’m taking English lessons once a week, but I am trying to fit two into the week now.”

Edoaurd has claimed 11 goals while taking on massive responsibility at the champions this season following the £19.7million sale of his fellow-countryman Moussa Dembele to Lyon on transfer deadline day plus the injury and illness that has sidelined Leigh Griffiths.

He still keeps in touch with Dembele and said: “He is my friend, so I am always going to keep in contact with him. That is natural.

“Moussa still keeps up to date with all the Celtic matches and results. He asks after everyone here and keeps in contact.”

The classy forward added: “We have shown over the past seven years that we are the best team and we want to keep that up for as long as we can.

“Callum McGregor is a really good player and has shown he can fill the position that has been left empty by Scott Brown.

“The players who are ready just get on with it when people are missing from the team because of injuries.

“Scott is a leader in the team, but I don’t think that it’s only one person. We have many leaders.

“I feel good physically right now. The same goes for the whole team, too. I just try to do as well as I can in each match.

“I don’t feel pressure on me. It is natural for me. I work well under pressure. I just try to work as hard as I can and to do well for the team in every game. That’s my aim.

“I’ve have my own personal aims for the season. The collective aim for us, though, is just to win as many matches as possible.”