CHRIS SUTTON insists a fully-fit and focused Leigh Griffiths would be “like a £20million signing” for Celtic.

However, the former Hoops hitman, now a media pundit, admits there are questions marks over the striker whose last appearance was a 12-minute cameo when he came on as a substitute in the 3-1 win over Hearts at Parkhead on August 25.

Griffiths, 29, missed a chunk of last season due to personal issues and has scored only nine goals – three time time out – since the start of the previous campaign.

Neil Lennon has brought the Scotland international into his first-team squad for this afternoon’s visit of Livingston and there could be an opportunity at some stage for the attacker to ease himself into the top side if things are going to plan.

Sutton, speaking to the Daily Record, said: “Griffiths showed he still knows where the net is after scoring a double in a run-out for the reserves as they beat Stenhousemuir 6-0 at Lennoxtown in midweek.

“His well-being is more important than a game of football, we need to be clear on that.

“He has been through a lot and we want to see him coming back strongly and banging in goals for Celtic because if he gets back to that level then it would be like a £20million signing.

“Griffiths will want to get back playing at a high level, but there are question marks over whether he can and it’s not unreasonable to say that.

“And Neil Lennon has to be ruthless in that respect which I’m sure everyone can understand. If you ask the gaffer straight, he’d like Griffiths back playing regularly and helping the team to honours at the end of the season. 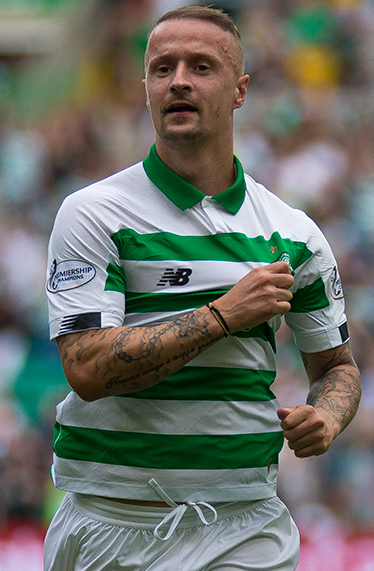 “And he has to look at Leigh’s training, how he’s performing and whether he thinks he can cut it at the highest level and ask himself: ‘How am I fixed for first-team strikers?’.

“Lenny can’t nurture Griff back and give him a month or two to bed himself in. In previous seasons when Celtic have been so far ahead, then maybe – but it isn’t like that now.

“We understand the gaffer’s position in this because Leigh is a Celtic cult hero and has scored some phenomenal goals, but at professional level you can’t necessarily think of the past – only the present and the future.

“And if you’re asking me at this moment if I think he can get back to the highest level, then I’d say he’s got it all to do.

“It’s from a physical point of view as much as anything because, with the greatest respect to central defenders, it’s not like you can shuffle across and use your experience.

“As soon as you lose that little bit of sharpness as a centre-forward, that ability to shift the ball half a yard and get a shot off, then it’s a huge issue.

“But if Griffiths can get back to form, then Celtic might not have to look elsewhere for a striker.”

Sutton added: “I’ve been saying for months that there’s a very real challenge coming from Rangers this season and if Odsonne Edouard gets injured Celtic don’t have an adequate back-up.

“I don’t know how Leigh’s feeling, but I’d wager there’s a burning desire and passion to get back into the first team and the level where he made his name banging in the goals.

“But players who have had large periods out of the game have shown it’s hard to work your way back to the top and, if I’m totally honest, Griffiths is going to find it hard.

“I know he scored during that little spell at the start of the season, but he has been out for such a long period of time and it’s difficult. 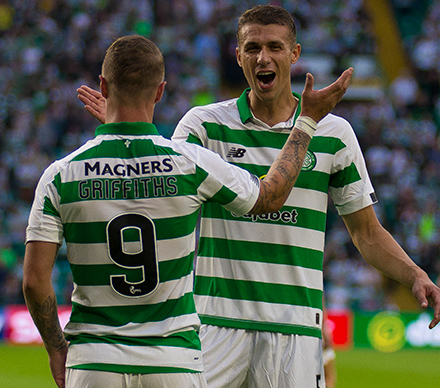 BACK IN THE OLD ROUTINE…Leigh Griffiths is congratulated by Jozo Simunovic after his goal against Nomme Kalju in July.

“It’s a really big ask for him to come back and find the form he once showed and the reason why he was Scotland’s No.1 striker.

“The main thing for him is to try to get back a level of fitness and stay injury-free – he’ll need lots of games under his belt for the second string.

“I don’t think he’ll have lost his ability to score – he’s such a fantastic natural finisher – but when you lose that little bit of sharpness it’s hard.”

Griffiths functioning a top pace would be welcomed by boss Lennon with Vakoun Issouf Bayo possibly on the sidelines until the turn of the year.

Edouard, 21, has been the main attack-leader since Moussa Dembele left in the £19.8million switch to Lyon in August last year and, despite his 13 goals this term, it’s clear the French ace could do with some support, especially with nine crucial games to face next month.

Griffiths could be the man to lighten the load.