GIORGOS GIAKOUMAKIS is at the centre of an injury mystery as Ange Postecoglou plans for the Scottish Cup semi-final at Hampden a week today.

The Greek international striker scored his 13th goal of the campaign with an angled drive for the second in the 7-0 rout of St Johnstone at Parkhead yesterday.

Giakoumakis, who has been in sparkling form since the turn of the year following just one strike in the first half of the season, netted the Hoops’ second against the Perth outfit in the 22nd minute, but was forced to limp off four minutes later with a hamstring pull.

The 27-year-old Premiership Player of the Month for March is clearly a doubt for the last-four encounter against Giovanni van Bronckhorst’s club at the national stadium, but some media reports insist the powerhouse frontman is already OUT of the tie. 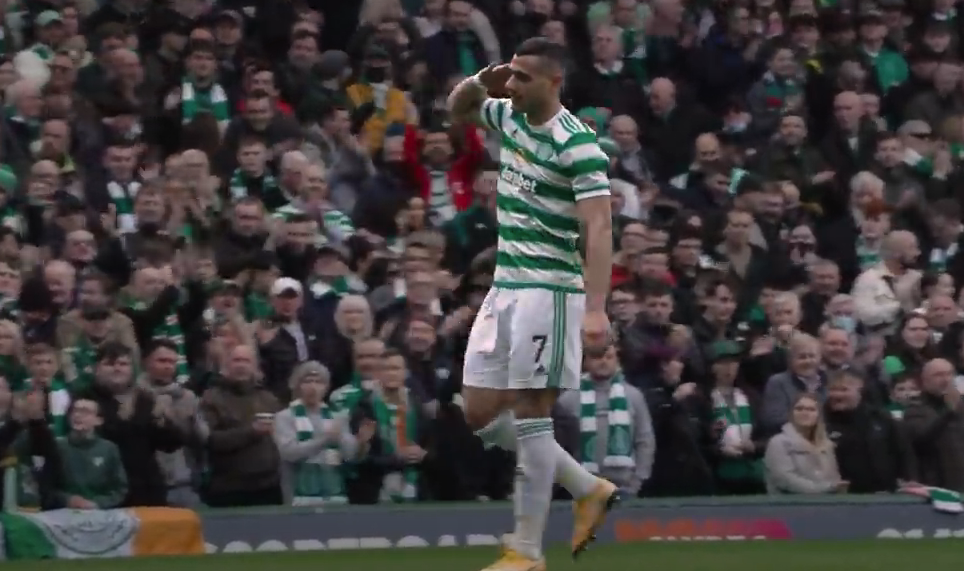 HERO’S SALUTE…Giorgos Giakoumakis acknowledges the Celtic fans after his goal against St Johnstone.

Postecoglou, though, has not been so swift to write off the player and, speaking to the Sunday Mail, said: “He felt a twinge in his hamstring, so we won’t really know until we assess him.

“It’s disappointing. Giakoumakis has carried an enormous load for us these past few weeks and worked really hard.

“Hopefully, it’s not something that keeps him out too long in the run-in.”