GIORGOS GIAKOUMAKIS has defended the remarks he made after Celtic’s 3-0 romp against Giovanni van Bronckhorst’s side in February.

The Greek striker’s comments were deemed “disrespectful” by Ryan Jack and the midfielder claimed he aimed to set the record straight at Ibrox at the weekend.

However, Giakouamakis had the final say again as he delivered a pulverising, all-action performance in Ange Postecoglou’s side’s 2-1 victory that saw them move six points clear at the Premiership summit with six games to play.

The clubs lock horns again in the Scottish Cup semi-final at Hampden a week on Sunday with the Hoops looking for their third successive derby triumph. 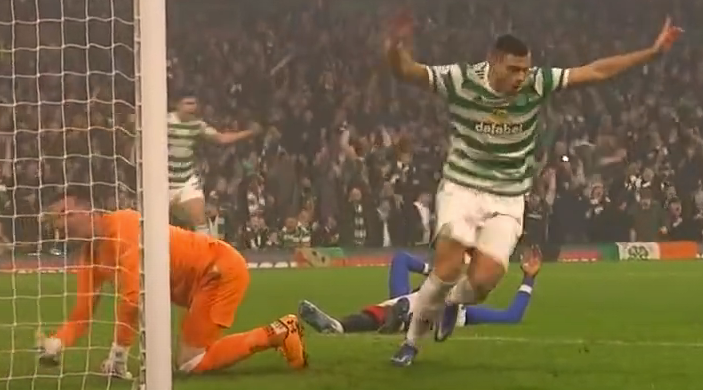 DERBY DELIGHT…Giorgos Giakoumakis races away in celebration after Reo Hatate’s opening goal in the 3-0 win in February.

The powerhouse frontman, who has netted 11 goals since the turn of the year, saw his sparkling form acknowledged with the Premiership Player of the Month for March award yesterday.

Giakoumakis, speaking to the Daily Record, said: “I didn’t make these comments to make anyone angry or feel disrespected by me. I said what I was believing for my team.

“I believe this time we played better as a team, that’s the only thing I said, but I can say also now that we played very good football and I believe in my team.

“Every single footballer can say his team is the best. I don’t think this is bad.

“From now on, we have to win the games and do our job.”

After just one goal in the first half of the campaign following his £2.5million arrival from Dutch minnows VVV-Venlo, the forward has been leading the line in place of Kyogo Furuhashi who has yet to kick a ball in 2022 as he battles a persistent hamstring strain. 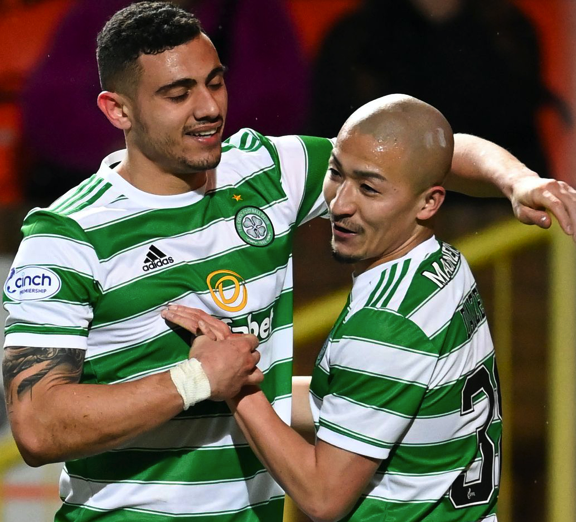 Giakoumakis, speaking to Celtic TV, continued: “I work a lot on my first touch finish, but I can also score with more touches.

“I’m a striker and when I get the chance to score with one touch then I do it.

“Last season, I didn’t only score with one touch, but this season it’s happened, although I don’t care how many touches I need, just to score.

“The plan of the team is the best for me with my style of play as it’s offensive and attacking football and it helps me a lot to have many chances in the game.”

“It’s my job to score the goals, but this is something that really helps me to have these types of chances from my team-mates.”

Giakoumakis, who now hopes to lead the attack against St Johnstone at Parkhead on Saturday, added: “We gave everything against Rangers. We didn’t play our best game, but it was a game that I can say was about passion and fight. 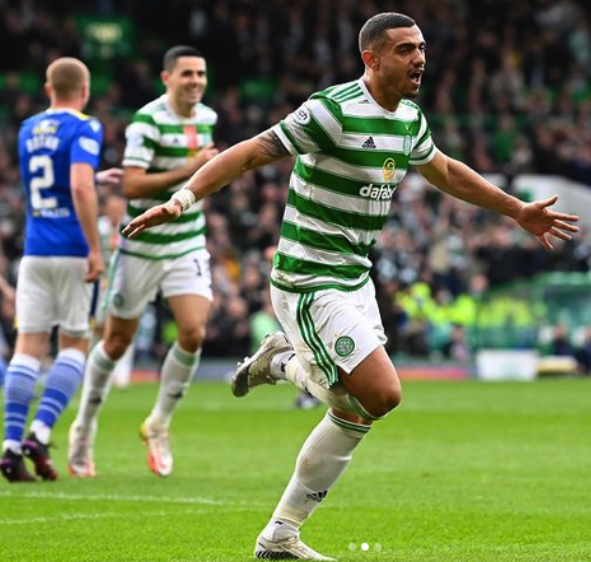 THE FIRST OF A DOZEN…Giorgos Giakoumakis races away after scoring his debut Celtic goal in the 2-0 victory over St Johnstone at Parkhead in October.

“The 700 fans there were a great impact on us and helped us a lot and I’m really proud to have them next to us and we play for them in every game.

“We lead the race by six points, but it’s not over yet and we need to protect this lead by winning every game.

“If we win our games then we don’t have to look at other teams, so that’s our mentality right now.

“We won the derby, but from Monday we focused on St Johnstone. That’s something we do every week and something we will do until the end.

“The last game at home against St Johnstone was my first from the start. I scored a goal, but then I got injured and I had to work a lot on my own.

“Since the second part of the season, I’m really fit and strong and I’m looking forward.”