Celtic Quick News on News Now
You are at:Home»Latest News»‘GIVE ME A CHANCE,’ POSTECOGLOU’S PLEA
By CQN Magazine on 10th December 2021 Latest News

ANGE POSTECOGLOU made a plea to “give me a chance” after being bombarded with questions over Kyogo Furuhashi’s injury situation following the dramatic 3-2 Europa League Group G win over Real Betis at Parkhead last night.

The Japanese striker looked to have pulled a hamstring when he was forced to come off in the 71st minute after he had come on as a substitute for Albian Ajeti in the first-half after the Swiss frontman had limped out of the action.

With Greek forward Giorgos Giakoumakis already sidelined for weeks with a knee problem, the last thing Postecoglou needed was for his main striking threat to be off the radar with a hectic schedule facing the team between now and the winter break following the visit of Giovanni van Bronckhorst’s Ibrox side on January 2. 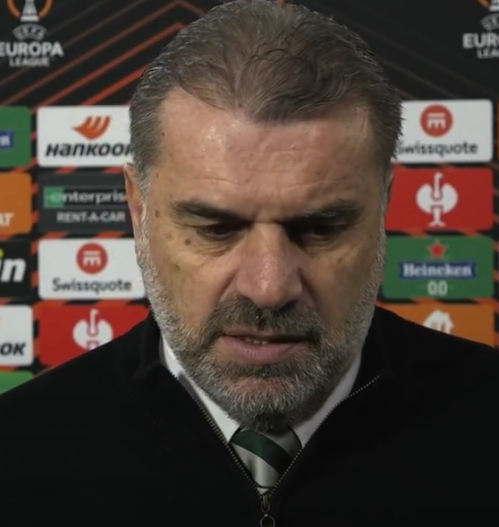 A LOT TO PONDER…Ange Postecoglou has to cope as the injury problems escalate at the Hoops.

The Greek-Australian also has a Premiership encounter with Motherwell at Parkhead on Sunday to contend with before the Premier Sports League Cup Final against Hibs at Hampden a week on Sunday.

Fans’ favourite Filipe Jota is also out of the silverware showpiece with a hamstring problem after pulling up against Hearts last week.

Postecoglou was clearly under pressure at the end of a hectic European confrontation with Manuel Pellegrini’s La Liga outfit and, as the questions over the availability of 14-goal Kyogo came thick and fast from the media, he admitted: “It is not good. We’ll just need to see how he is.”

The queries persisted over what could be a potentially disastrous situation and the Hoops gaffer said: “We’ll assess them, we’re not really sure at the minute. 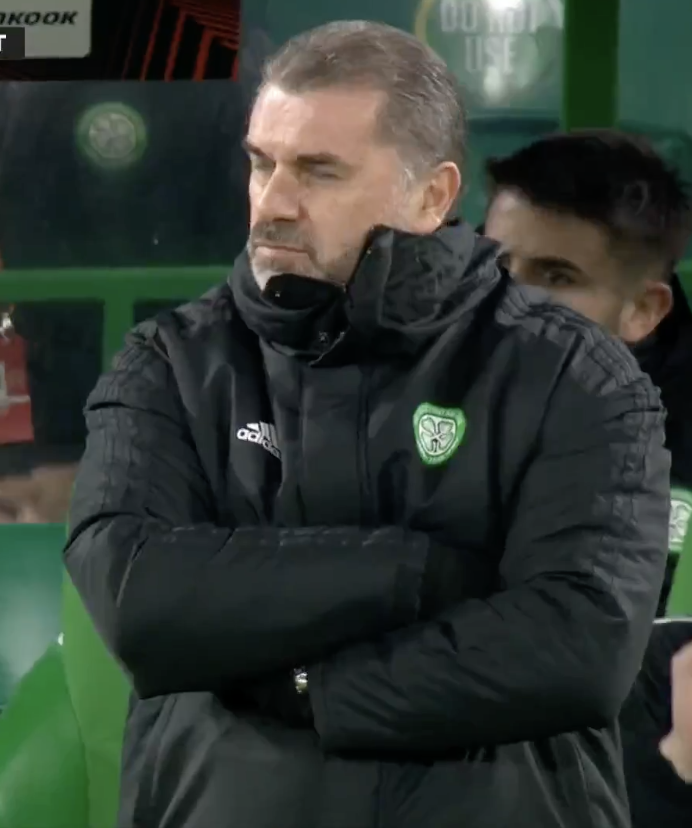 WATCHING BRIEF…Ange Postecoglou looks on as the action unfolds at Parkhead.

Postecoglou continued: “We would have preferred to maybe give Kyogo a bit of a rest, but with Albian also getting a hamstring issue we are just going through a bit of a rough time at the minute.

“We are getting a few injuries. The amount of games we are playing is just ridiculous.

“We don’t have the squad to deal with it. Luckily tonight we got 90 minutes into some guys who will hopefully help us moving forward.”

Talking of the relentless conveyor belt of games, Postecoglou, speaking to BT Sports, commented: “It’s very demanding on the players. We don’t have the squad yet to cope with that and that’s putting stress on us.

“It’s what we’ve to deal with the whole way through. We’ve still got seven games to go, remarkably, between now and the break, so we’ve got to make sure that we keep presenting ourselves well.”

OFF…Kyogo Furuhashi looks disconsolate as he leaves the field against Real Betis.

The Hoops boss made eleven changes to the line-up that beat Dundee United 3-0 at Tannadice at the weekend and gave debuts to former Sheffield Wednesday duo Osaze Urhoghide and Liam Shaw with both players taking the opportunity to impress.

Postecoglou added: “It’s not ideal, but we’ve dealt with it in the past and we’ll deal with it again. From my perspective, as you saw, irrespective of what team we put out there, there’s a good level of energy, good intent to play our football and we’re just going to keep doing that every game we play.

“Hopefully, when the break comes along we get reinforced and ready to become stronger from that.”

Postecoglou has also insisted he will be strengthening his squad during the January window and, as the injury setbacks mount up at a frightening and punishing rate, the manager’s need to add quality to his player pool is more than obvious. 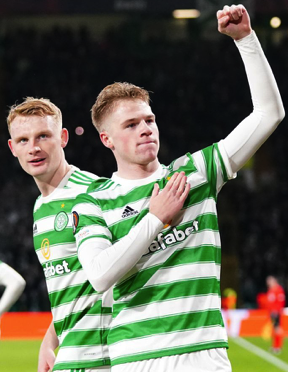 EURO STAR…Stephen Welsh celebrates his first European goal for Celtic after the opener against Real Betis. Liam Scales is about to add his congratulations.

Goals from Stephen Welsh, Ewan Henderson – his first for the club – and David Turnbull, with a penalty-kick, gave the Hoops their success against the Spaniards to hoist them to nine points for the section after three wins and three losses.

However, as Postecoglou now switches his attention to the European Conference League, he must persuade the Hoops hierarchy to release the funds to maintain progress.

One thing is certain, it is going to be fairly hectic around the east end of Glasgow for the entire month of January as far as comings and goings are concerned.