CELTIC great John Hartson has a message for the Celtic board: Give Neil Lennon the manager’s job on a full-time basis NOW!

The ex-Hoops striker’s former team-mate answered the club’s SOS a week ago to take charge of the team on an interim basis following the swift exit of Brendan Rodgers to mid-table Leicester City.

Lennon had to hit the ground running with a crucial Premiership encounter against Hearts at Tynecastle due only 24 hours after the manager’s defection, despite still having over two years of a lucrative contract still to run.

The Northern Irishman guided the champions to a 2-1 triumph – with substitute Odsonne Edouard claiming the stoppage-time winner – to keep the team on course for eight title in a row while maintaining an eight-point lead at the top of the table with only 10 games to play. 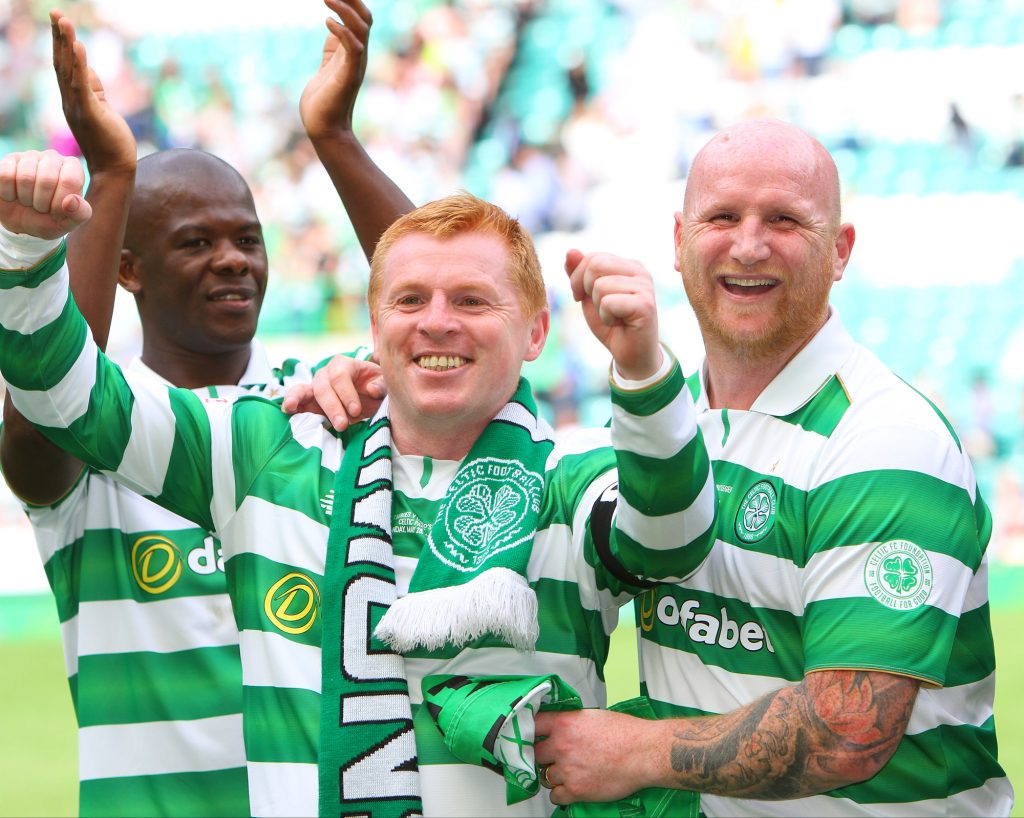 THAT’S MY BHOY…John Hartson is all smiles with Neil Lennon as Bobo Balde joins in after a charity game.

Lennon was then entrusted with putting together a line-up capable of returning to Edinburgh for the vital Scottish Cup quarter-final clash against his former club Hibs at Easter Road.

Once again, his formation delivered the goods with second-half goals from James Forrest and Scott Brown making sure of a 2-0 victory and a place in the semi-final where they will play the winners on the replay a week tonight between Rangers and Aberdeen following last night’s ballot.

The former manager and captain is now preparing his players for the Premiership encounter against the Dons at a 60,000 sell-out crowd at Parkhead on Saturday.

Hartson, speaking in the Evening Times, insisted the cub’s hierarchy should give Lennon a vote of confidence immediately and offer him a permanent deal. 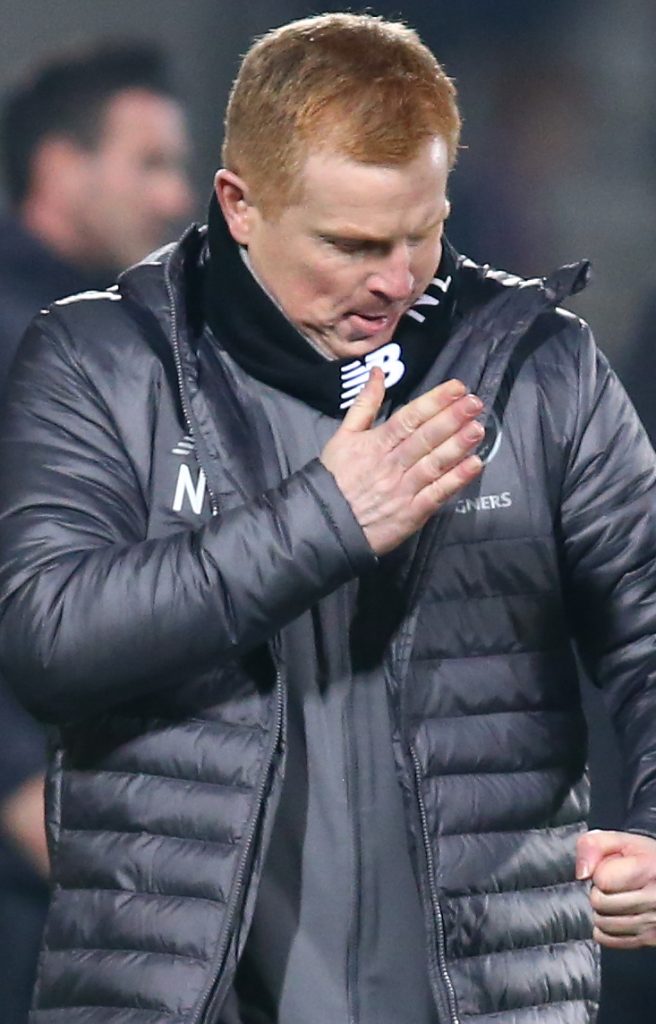 YOU’RE IN MY HEART…Neil Lennon at the end of the 2-1 win at Tynecastle last week.

“I also think that in his second stint at Celtic he will be older and wiser. I don’t think he has ever lost that feisty, passionate side to him and I don’t think that you would want him to, but what I do think is that he has channelled it in the right direction.

“You saw him at Tynecastle, a ground where he has a fair old bit of history. He was assaulted by some lout who jumped on him one night and then he was hit by a coin there just earlier in the season. Yet, when Celtic scored the winner on Wednesday night he was on his best behaviour.

“It was the same at Easter Road. But these two grounds are places where Celtic haven’t won this season. In fact, they hadn’t won in Leith since January 2014.

“So, he has gone in, he has the respect of the players, he has the support of the Celtic support and it makes perfect sense for me to avoid any hanging about it.

“Just give him the job and let him get on with it.

“Who else are you going to get in? I don’t see too many Premier League or credible European managers out there who would not cost a fortune to get in – and want a fortune to spend in the transfer market.

“I’ve heard a few people mention Davie Moyes. Davie Moyes? Give me a break. The job should be Lennon’s.

“Celtic have a huge rebuilding job facing them this summer. You have a significant part of the team who will go.

“Dedryck Boyata is reported to be on Brendan Rodgers’ wanted list at Leicester, but, regardless of whether that is accurate or not, he will leave Celtic. Filip Benkovic will go back to Leicester as was always the plan so right away you are looking at Champions League qualifiers without a central defence.

“Making a call now on the job would enable all that planning to start now. Who do you want to keep, who is going and who are your targets that you want to get in, and get in quickly.

“There’s also things like summer training camps, pre-season games, all sorts of things that will need attention and ideally you want the manager who is walking out into those crucial qualification games to sort them.

“I fully expect that Neil will pick up seamlessly where Brendan has left off. I think we have already seen that with the performances in the two games.

“He will get them over the line to the league and I suspect he will get his hands on the Scottish Cup, too, but there is a pressure that comes with not knowing what the long-term is.

“We all know that there is pressure in every game you play or manager at Celtic, but if you feel like you are auditioning for the job then it adds another layer to that.

“Just make the call and move on.”