Celtic Quick News on News Now
You are at:Home»Football Matters»GMS PRAISES ROBERTS
By CQN Magazine on 3rd April 2016 Football Matters
GARY MACKAY-STEVEN praised his strike partner Patrick Roberts after they combined to shoot down Hearts 3-1.
The Celtic pair reacted well to the shock of Jamie Walker firing the Edinburgh side into the lead in the fifth minute.
Mackay-Steven, who levelled 10 minutes later, said: “This was definitely a big test for us. 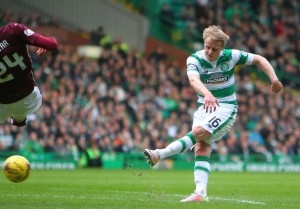 “We knew Hearts were a good team and they pressed us a lot in the first-half.
“Of course, we went behind early on, but I thought we showed good character to come back.
“Thankfully, I scored early to equalise and Pat netted to put us ahead before half-time.
“We wanted an early goal in the second-half to kill them off and Pat managed that with another great finish. His second goal made it a bit more comfortable for us throughout the second period.
“A 3-1 win over Hearts is a great result for us.”