SCOTT BROWN has ordered Leigh Griffiths to get up to speed if he hopes to play a role in Celtic’s bid for the historic 10 titles in a row.

The striker has been left at home while his team-mates prepare for this evening’s friendly against Nice in Lyon before they taks on the hosts, with Moussa Dembele in the opposition, on Saturday and Paris Saint-Germain in the French capital on Tuesday.

Neil Lennon axed the 29-year-old Scotland international from the travelling squad to work on his fitness levels at Lennoxtown.

Skipper Brown, who has shaved off his lockdown locks and looks a bit like his old self, told the Daily Record: “Everyone here has worked extremely hard on their fitness and he needs to make sure he does that, as well.

“We all know how good he is and how good a left foot he has. It’s just up to him to get himself up to speed as quickly as he can. 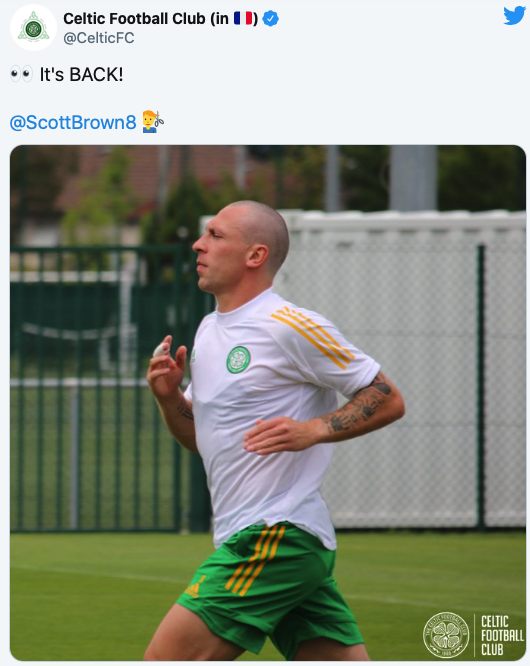 “You saw him last season. He came back and we changed to 3-5-2. I think it really helped him playing alongside Odsonne.

“It’s Odsonne who is in prime position right now, but you never now what could happen down the line and if we play that way again.

“We always need our full squad as fit as possible – and that’s what pre-season is for.”

Griffiths ended last season on a high when he netted a superb hat-trick in the champions’ 5-0 Premiership trriumph over St Mirren at Parkhead on March 7 – just a few days before football went into cold storage due to the coronavirus pandemic.

The comeback Bhoy claimed eight goals after the turn of the year to take his tally to 11 for the campaign.

Now he has to buckle down once again to prove he is worthy of a place in Lennon’s recking for a crucial campaign.

* DON’T miss the unbeatable match report from Nice v Celtic this evening – only in your champion CQN.