Celtic Quick News on News Now
You are at:Home»Latest News»‘GOOD LUCK TRYING TO KEEP HIM OUT,’ ANGE’S TRIBUTE TO ‘HALF-FIT’ KYOGO
By CQN Magazine on 20th December 2021 Latest News

CELTIC can be thankful Kyogo Furuhashi is a person who will not take no for an answer.

Ange Postecoglou admitted the Japanese striker was not operating at full capacity after missing back-to-back Premiership games against Motherwell and Ross County.

Kyogo limped out of the 3-2 Europa League Group G win over Real Betis at Parkhead 10 days before the Premier Sports League Cup Final against Hibs at Hampden and it appeared to be odds-on the pacy frontman would not overcome his hamstring injury in time to play in the silverware showpiece. 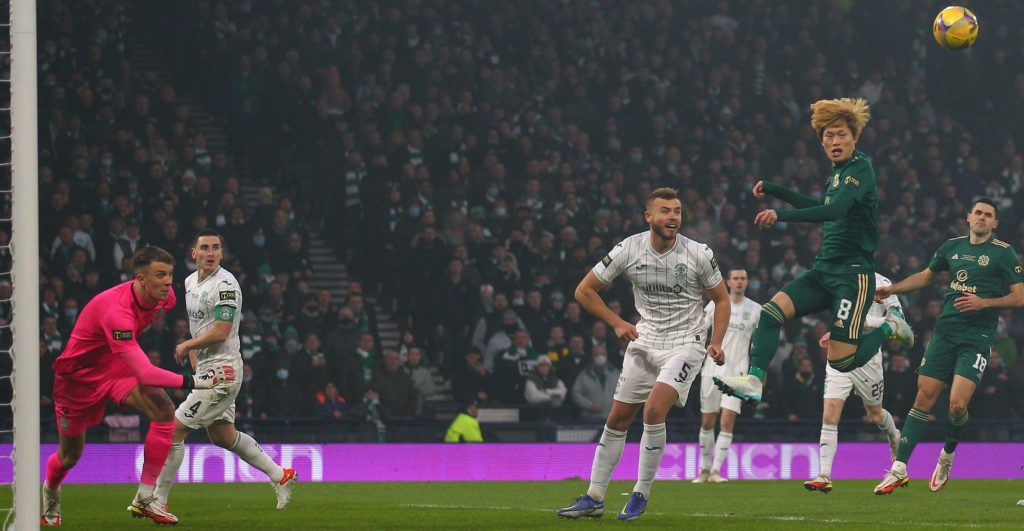 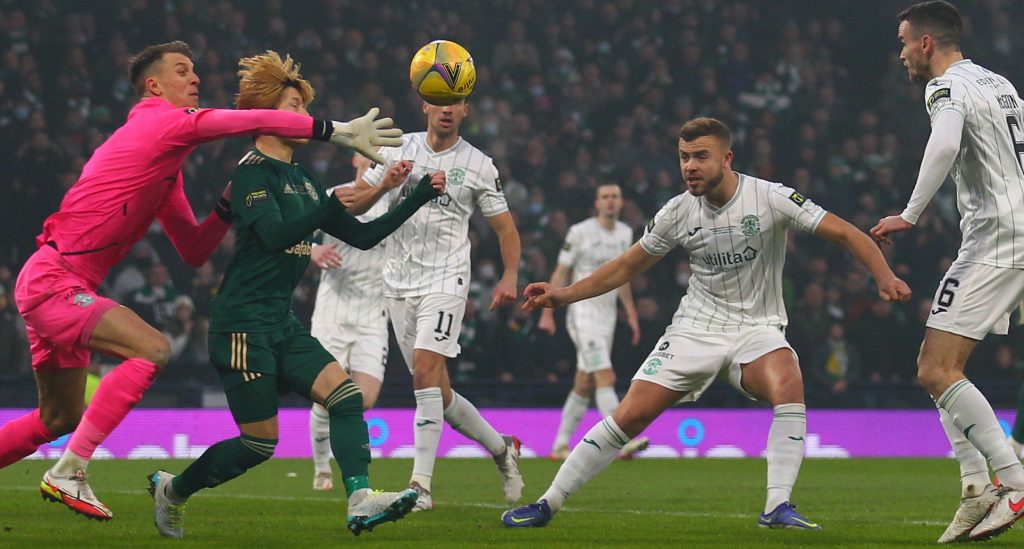 ODD MAN OUT…Kyogo Furuhashi is heavily outnumbered by the Hibs defence as he goes for a loose ball.

However, the £4.6million arrival from Vissel Kobe in late July simply refused to accept he would miss the big game.

Postecoglou had just about resigned himself to the fact the influential attacker, who now has 16 goals to his credit since opening his account with a strike against FK Jabonec in the Czech Republic on August 5, would not be performing at the national stadium.

Kyogo, though, persisted with the notion he had a role to play against the Edinburgh club – and the Greek-Australian relented and named him in his starting line-up. And Celtic fans can be forever grateful at the stubborn persistence of their shooting star from the Far East.

Breathtakingly, he responded to the challenge of not letting down his manager, team-mates or supporters with two marvellous strikes within 22 second-half minutes to with the twentieth League Cup for the Parkhead side.

A beaming Postecoglou admitted: “Of course there is risk, but good luck trying to keep him out.

THAT’S MY BHOY…Ange Postecoglou and Kyogo Furuhashi share a moment at Hampden.

“There was no chance. He would have snuck on the bus or snuck onto the field at some point.

“He just had it in his head that he was going to play. He wanted to help the players and the team and to be part of this.

“Having worked in Japan, I know the mentality. They have a really strong culture in facing up to their responsibilities.

“I think he felt responsible to go out there and help the players.

“From the moment he picked up the injury, there was no way he was not going to play, irrespective of what I was saying or the medical team were saying.

“This football club and him were a match made in heaven. 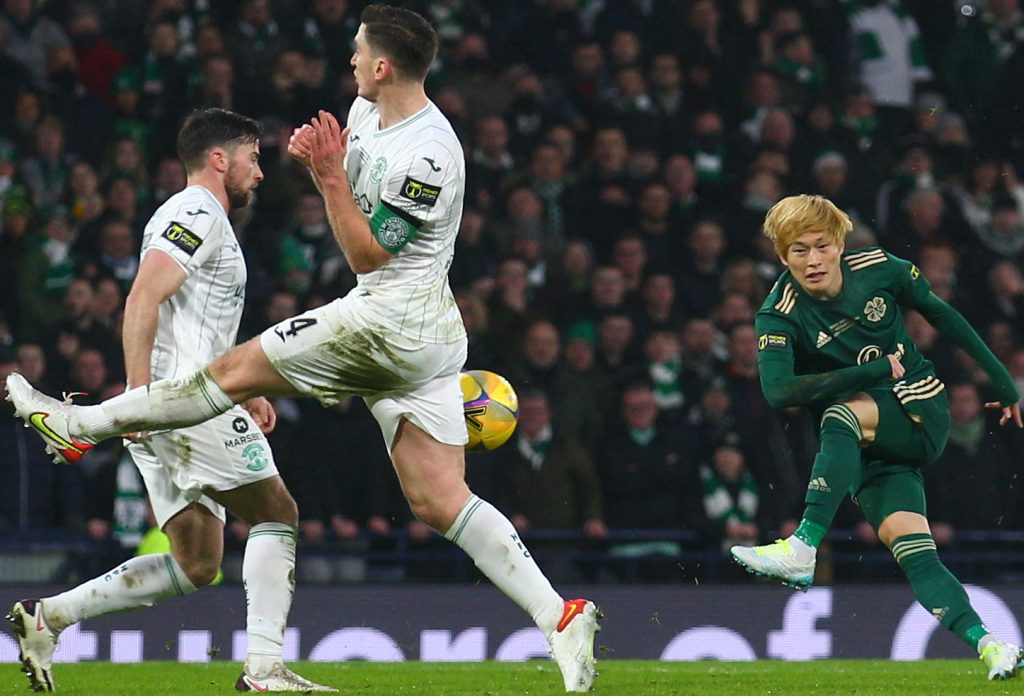 BY THE LEFT…Kyogo Furuhashi fires in a drive as Lewis Stevenson and Paul Hanlon try to block his effort. 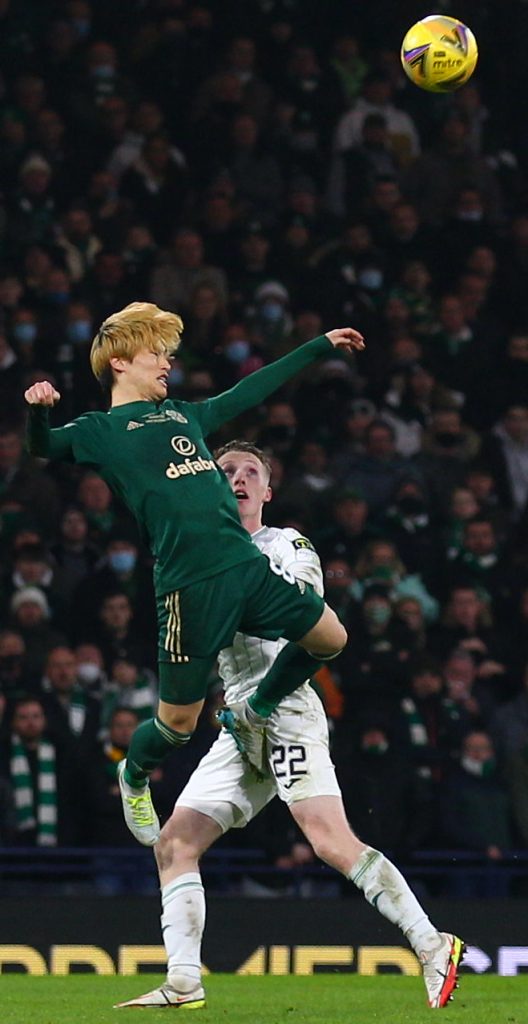 UP FOR THE CUP…Kyogo Furuhashi in balletic pose at Hampden.

“He’s a fantastic player, but what a person. We were kind of thinking it wouldn’t happen, but he just made himself available, even though he’s not 100 per cent.

“I don’t know how he did it, but he’s a quality player and a quality person.”

The Greek-Australian continued: “You are bringing someone from the other side of the world and I don’t think anyone would have said he was a cast-iron guarantee to be a hit for a lot of people.

“I knew he would be a fantastic player and he is an even better person. His movement is incredible, but the quality of his finishing.

“To have that composure in such a big game. They are two world-class finishes. He knows that everyone is watching him and that’s one of the challenges we had.

“We are missing some significant talent at the moment, but these boys keep finding a way.” 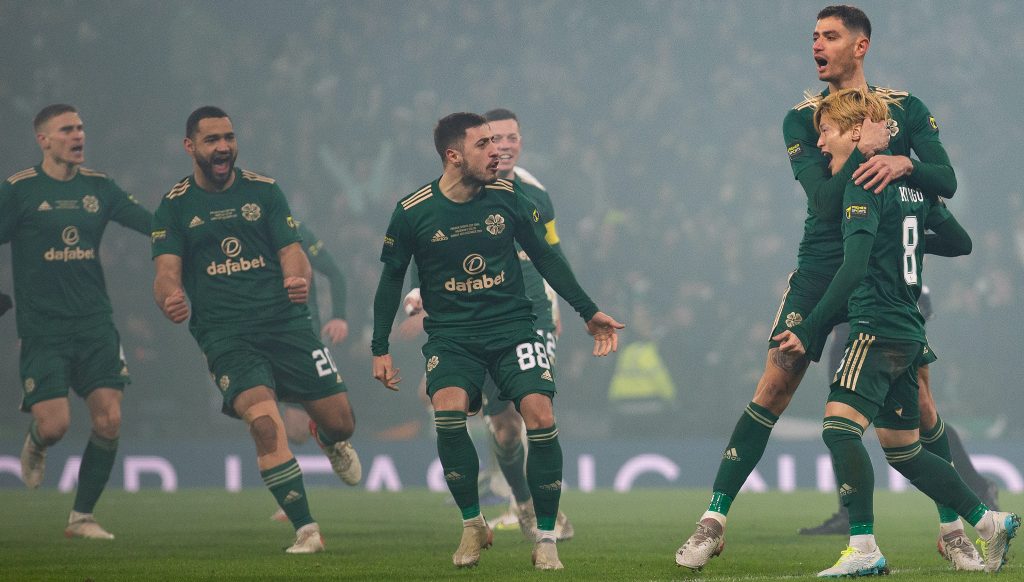 NATIONAL HERO…Kyogo Furuhashi is congratulated by Nir Bitton following his quickfire equaliser. Carl Starfelt, Cameron Carter-Vickers, Josip Juranovic and Callum McGregor are about to join in. 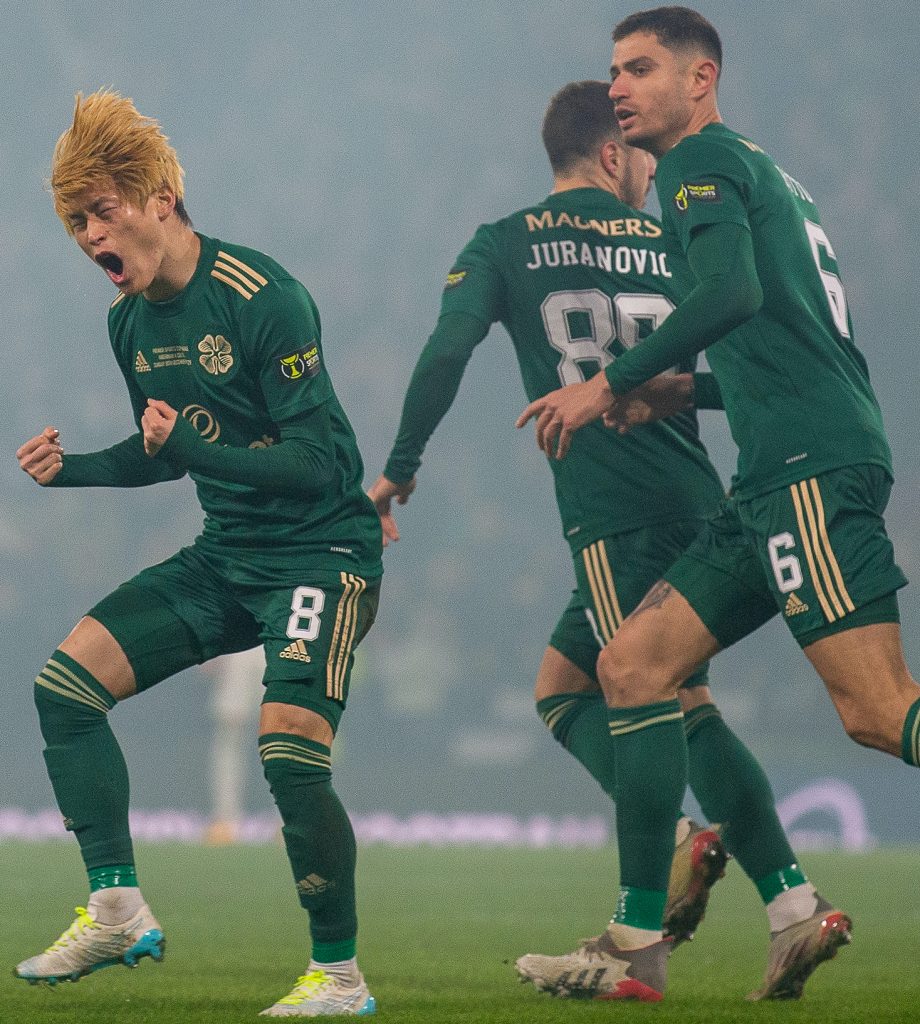 CHEERS…Kyogo Furuhashi yells in delight with Josip Juranovic and Nir Bitton in attendance.

Kyogo has most certainly hit the ground running since he became one of a dozen recruits at the club in the summer following the massive disappointment of the previous campaign when the historic quest for the tenth successive title was blown by early January.

Following Neil Lennon’s departure in February, the team limped through the remaining 10 fixtures with John Kennedy in interim charge and completed a wretched season without a trophy for the first time in eleven years.

Normal service, thankfully, has been restored with the first domestic trophy now residing in the east end of Glasgow and Postecoglou has some more good news for the Hoops faithful with the hint he is ready to raid the Japanese market next month to further strengthen his squad.

The no-nonsense gaffer, speaking to the Daily Record, added: “Obviously, I have an advantage. 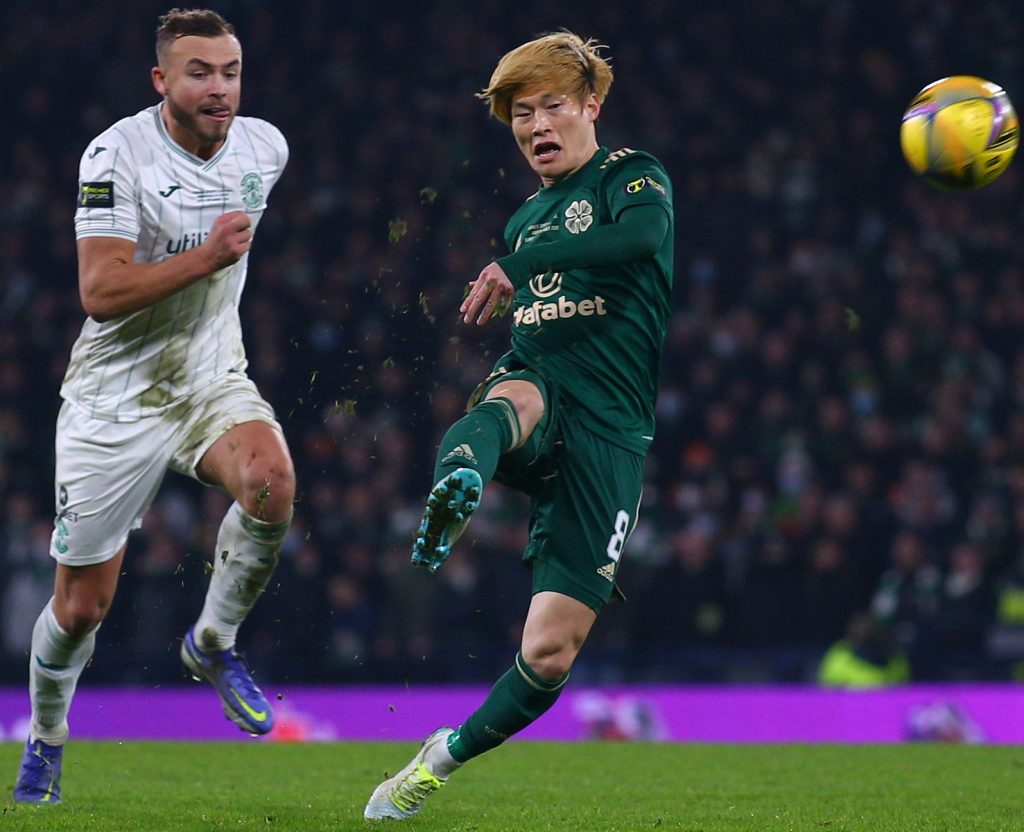 THE WINNER…Kyogo Furuhashi makes perfectly contact to deftly lob the ball towards the Hibs net with Ryan Porteous too late to intervene. 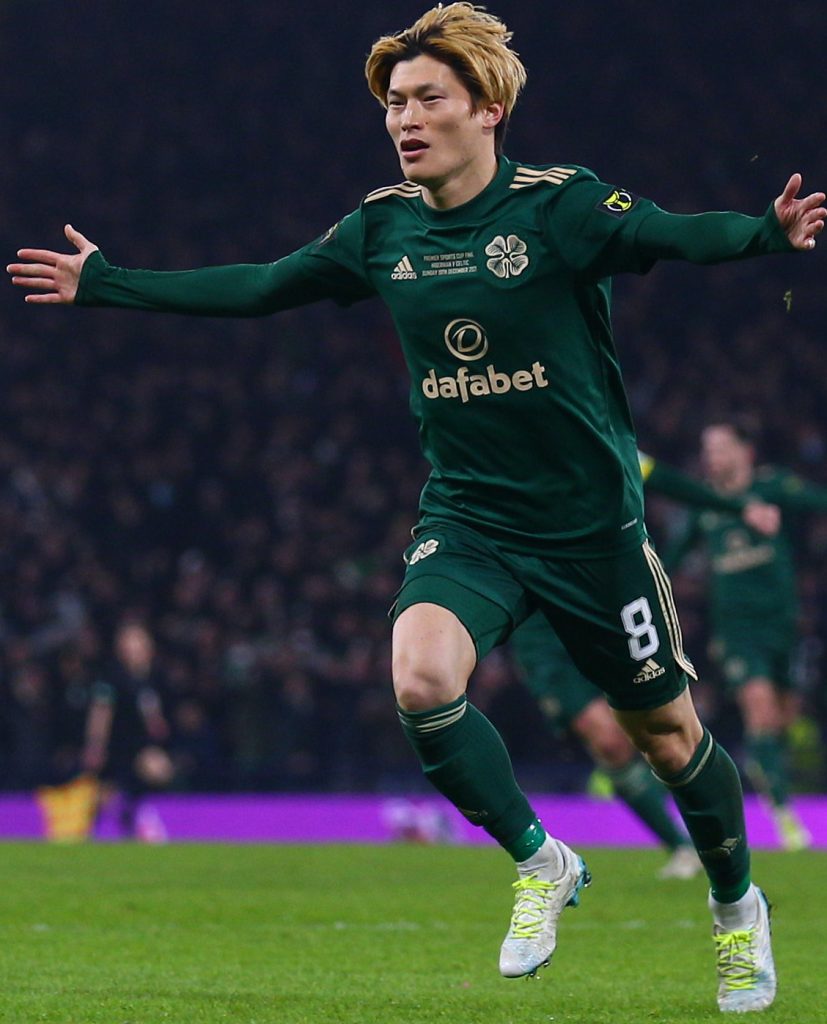 GLASGOW BELONGS TO ME…Kyogo Furuhashi races away after securing the 2-1 victory – and Celtic’s 20th League Cup.

“Maybe if I hadn’t managed on that side of the world, I might have had the same scepticism about whether their talent could transfer to European football and, more particularly, Scottish football.

“But Japanese players in general have had a great deal of success on the continent.

“When I took over I was definitely going to use that.

“Kyogo was always going to be my first pick because I had witnessed at first hand what sort of player he was. I had no doubt he would be successful.

“It’s not just with him, it’s with all of them, especially the ones I have brought in because I have to take responsibility for them.

“I have brought Kyogo from the other side of the world and you just want them to do well.

“They put so much into it. Like I keep saying to them: If you put the right things in and work hard you will get your returns.”