CALLUM McGREGOR has been hailed by Neil Lennon as a future Celtic captain – when evergreen Scott Brown calls it a day.

The Scotland international, who, at 26, is eight years the junior of the club skipper, was the onfield leader in the 3-1 victory over Kilmarnock at Parkhead yesterday.

Brown, who limped off near the end of the 1-1 Europa League draw with FC Copenhagen last week, missed his first Premiership encounter of the campaign after playing in the previous 27 outings.

McGregor didn’t let down his midfield partner, manager, team-mates or supporters with an excellent and disciplined performance – as CQN described in the match report – and Lennon was suitably impressed. 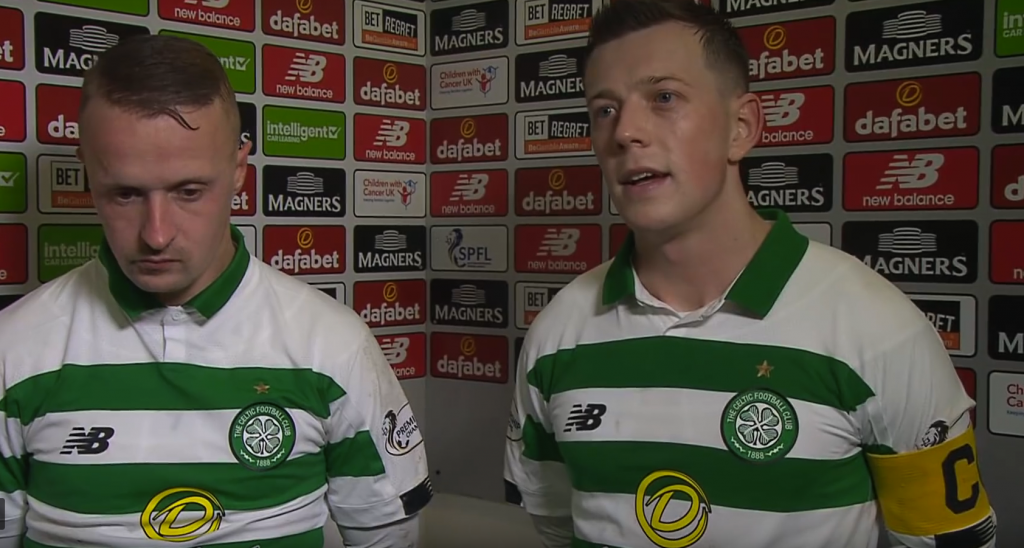 TWO OF A KIND…Leigh Griffiths and Callum McGregor, wearing captain’s armband, are interviewed after the game.

The Hoops boss, speaking to the Daily Record, said: “You can see what a good player Callum is.

“I say ‘good’, but that’s an understatement. At this level, he’s different class and he’s a contender for Player of the Year, the way he’s played this season. I thought his performance against Kilmarnock was immaculate.

“I see him in the role of captain, but in that position? Maybe when he’s the other side of 30. He’s got a lot to offer higher up the pitch, but we wanted him in there on this occasion.”

McGregor, linked again with Brendan Rodgers’ Leicester City at the weekend, is ready to take over the armband once more for the Europa League return against the Danes at Parkhead on Thursday night.

Lennon gave an update on Brown problem when he added: “He’s got a stresser in the toe area, so we’ll see how he is.”