CRAIG GORDON believes Scott Sinclair will kick on after his cheeky back-heel winner against Aberdeen at the weekend.

The winger, who has been a bit-part player this season after his spectacular debut campaign in 2016/17, displayed his emotion as he raced to the cheering fans behind the goal.

Gordon said: “I think that will give him a lot of confidence. It was a really tidy finish in a tight area.

“That is what he gives you. He has quick feet in that final third.

“It didn’t look like there was anything on with his back to goal and he produces a piece of magic. It was a great piece of skill to score from that angle and that position.

“I’m sure he will take a lot of positives from it. It will be great to have him on form because when he is then he is a massive threat for us.”

Gordon also played a key role in the champions picking up three much-needed points with a fine save to deny former Hoops team-mate Gary Mackay-Steven after the winger had skipped past three challenges to set up the opening three minutes before the interval.

The Scotland international keeper said: “I just managed to get my leg out and get a few studs on it. That was enough to take it wide of the far post. 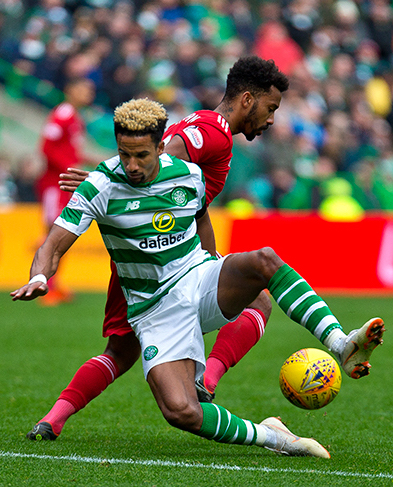 “It was good timing in the game. It made sure we went in 0-0 at half-time. It was vital to keep it level and give the guys a platform to go and win it.”

The clean sheet is the team’s seventh in their last eight games – only Kilmarnock have broken the barrier during that sequence.

The 35-year-old shotstopper added: “We have been defending very well and I’m not having to make too many saves.

“The guys in front of me have been doing particularly well. That gives the team a chance to win the match if we get just one goal. Dedryck Boyata has been fantastic since he came back into the team.

“He has been an absolute rock. He is so solid and is marshalling the rest of the guys.

“It is great to play behind someone like that, who is so quick and attacks the ball. He is definitely our best defender at the moment.”

Boyata was immense against the Dons, but Jack Hendry deserves credit, too. It hasn’t been easy for the 23-year-old defender since he arrived from Dundee in a £1.3million switch in January.

Like the Belgian stopper at the weekend, he rarely put a foot wrong and it augers well for Thursday when Brendan Rodgers’ men travel to Austria to take on RB Salzburg in the second Europa League Group B encounter.