CRAIG GORDON brought down the curtain on 2018 with a Man of the Match performance in the disappointing 1-0 loss to Steven Gerrard’s side at Ibrox.

The Celtic keeper and Callum McGregor, playing at left-back in an emergency, were the Hoops’ best players in a display best forgotten.

Gordon, though, has yet to feature in the first team side since the turn of the year with Scott Bain getting the nod to start against Airdrie in the Scottish Cup last Saturday night and St Mirren in the Premiership on Wednesday.

The former Dundee shotstopper hasn’t exactly been overworked against the League One part-timers and the top-flight’s bottom team as Brendan Rodgers’ side have won 3-0 and 4-0 respectively.

The Irishman explained his decision to switch goalies, stating in CQN yesterday: “I’ve got two very good goalkeepers and I’m giving Scott a little run in the team because I know what Craig can do.” 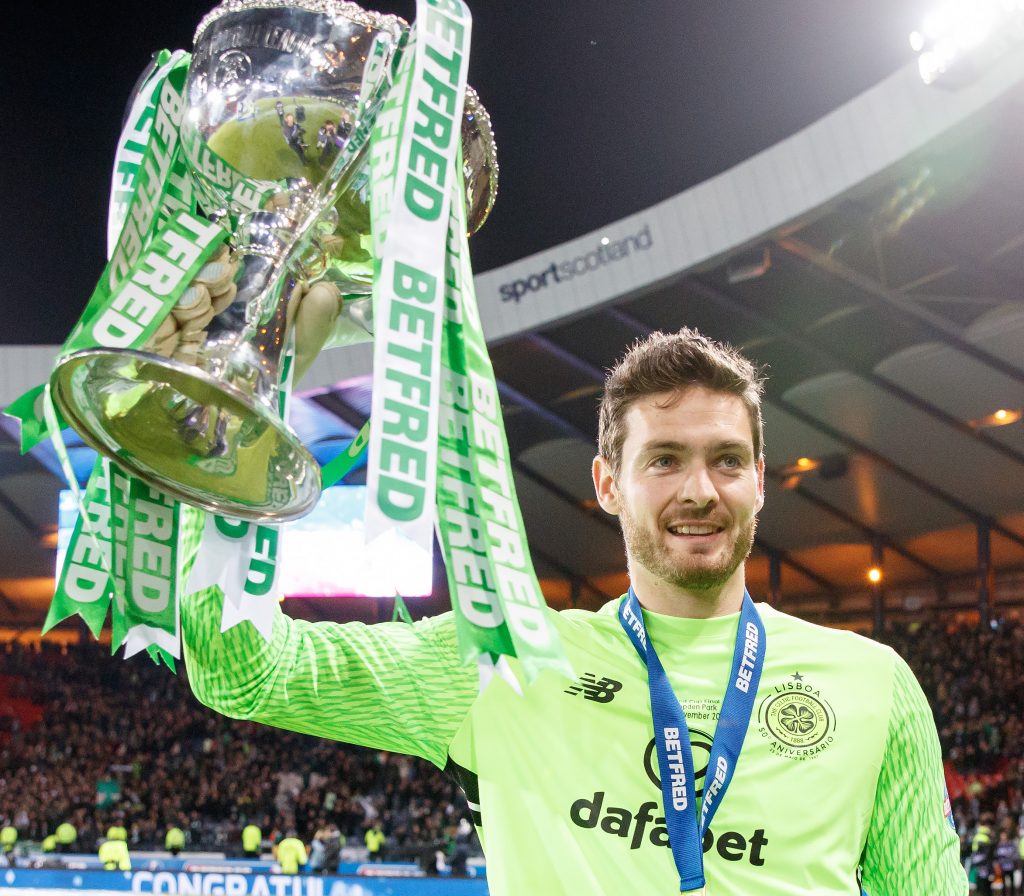 THE CUP THAT CHEERS (Part One)…Craig Gordon with the Betfred League Cup following the 2-0 win over Motherwell last season.

Celtic legend Davie Hay has given his view on Rodgers’ decision.

The former Hoops player and manager said: “I have got to say that I think Craig Gordon is a top keeper.

“I like Scott Bain. I think he is a strong goalkeeper and you would have to say he has never let anyone down when called upon to come into the team.

“But right now I would maintain that Gordon is the better of the two keepers.

“I’m not sure that is the way everyone sees it.

“And we’ll only really know how Brendan Rodgers sees it over the next few weeks. Who starts against Hamilton Accies and then against St Johnstone might just give an indication of who he wants as his No.1 between now and the end of the season.

“Gordon is clearly the more experienced and, for me, would be my first choice.

“Which is no slight on Bain. I am not sure anyone could point the finger at what he has done since he arrived at the club. He exudes a calmness that I am not sure Gordon always does in the eyes of the support.

“There seems to be anxious moments, some which Gordon can bring on himself when he looks to play the ball out when it is not always on. But if you look back to that game at Ibrox at the end of the year, it would have been far more without the way Gordon played.

“He pulled off some really impressive saves and I think he still has that about him.

“He might take the odd chance with his passing, but, overall, I think he is a vastly-experienced goalkeeper who has proved himself at the top level in the game.

“But it is the manager who watches training every day and who sees things that we don’t all see, so who knows?” 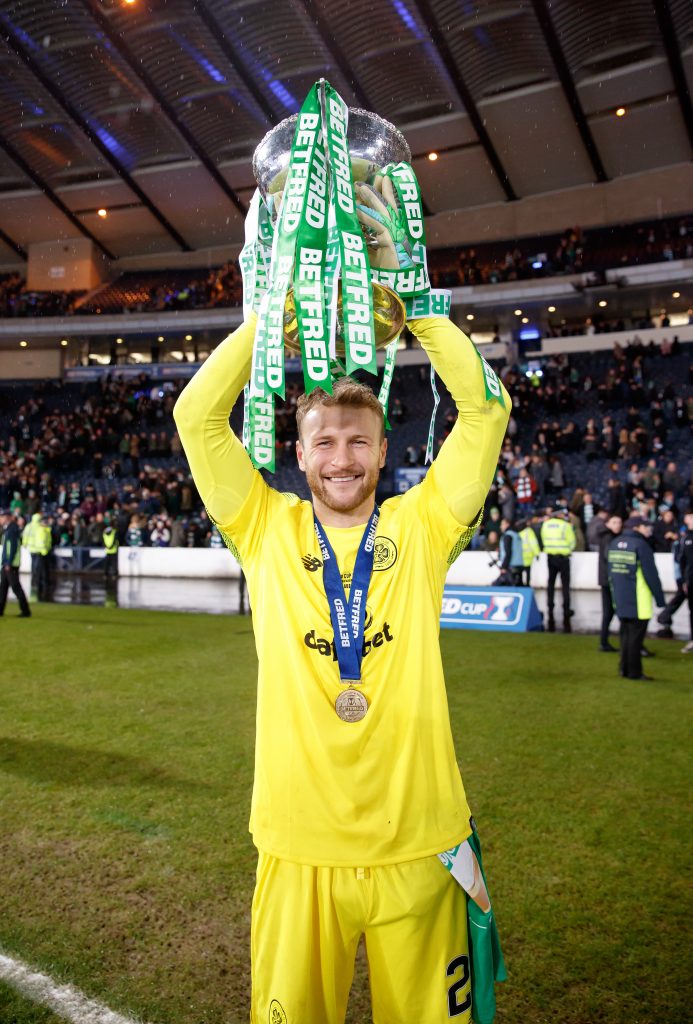 THE CUP THAT CHEERS (Part Two)…Scott Bain with the Betfred League Cup following the 1-0 win over Aberdeen this season. Pics: Geo.

Hay, now a Celtic ambassador, added: “You would have to say that with a run of home games between the end of this month and February that it would seem the easiest time to switch goalkeepers if you were of a mind to do so.

“We won’t know until we see how the next couple of games pans out because Gordon could just as easily find himself back in the starting XI for tomorrow’s game. Who knows?

“One thing is for sure, though. That defeat at Ibrox already feels like a long time ago.

“Two comfortable home wins with seven goals scored and none conceded and two of the January signings finding their feet has to be seen to be a decent start to the year.

“And the fact that Rangers slipped up at Rugby Park means that the have lost a big part of the benefit of that win – while Celtic have been able to catch their breath.”

It looked as though Rodgers had selected Bain, who joined on a permanent deal in the summer following an impressive six months on loan from Dens Park, as his Cup keeper when he played him all the way through the Betfred League Cup.

The shotstopper conceded just one goal – in the 3-1 win over Partick Thistle in the opening round – in the silverware triumph as he kept clean sheets against St Johnstone (1-0), Hearts (3-0) and Aberdeen (1-0).

Gordon has hoped to play in the first defence of the Scottish Cup on Saturday, but the Parkhead gaffer again went with his understudy.

With so little to do in his two outings, it could be Rodgers will field him against Accies – but with the Europa League double-header against Valencia due next month it will be highly interesting to see who wins the battle for the gloves.