Celtic Quick News on News Now
You are at:Home»Latest News»GORDON RAGES AT BLUNDER REF THOMSON
By CQN Magazine on 31st January 2016 Latest News
CRAIG GORDON insists referee Craig Thomson got key decisions wrong in Ross County’s opening two goals.
The keeper was left fuming after a tussle with Alex Schalk at a corner-kick, which led to Paul Quinn heading the Highlanders into a 2-1 lead.
Gordon was booked for his protest and he was also unhappy at the whistler’s decision to show a red card to Efe Ambrose, which led to County drawing level on the way to a shock 3-1 win which set up a League Cup Final meeting with Hibs.
Speaking about the second goal, the international No.1 said: “Schalk dragged me towards the front post and it looks like it is right off the training ground.

“Grab the goalie, take him to the front post and we’ll deliver the ball to the back. From that point of view it has worked for them. 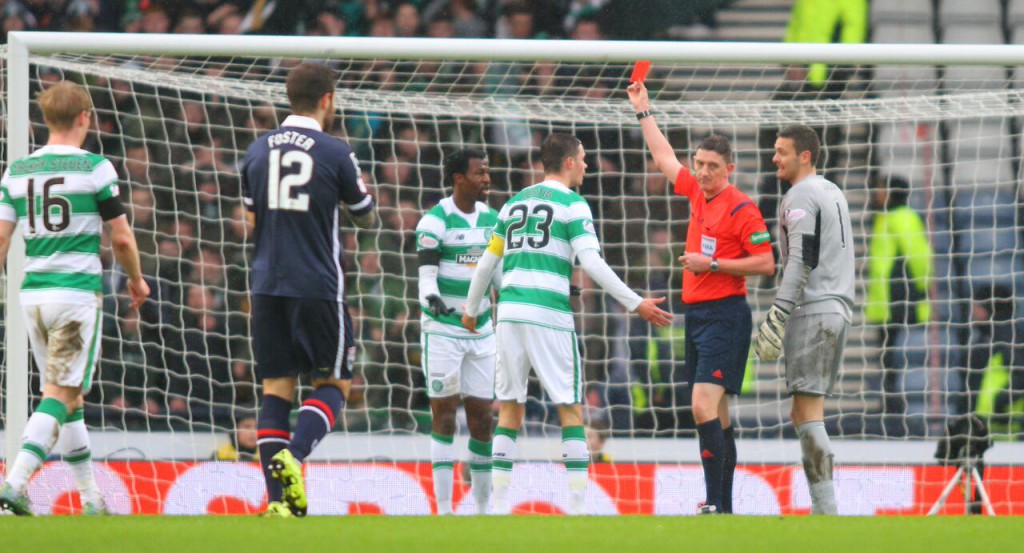 “It can’t be allowed otherwise I’m standing in the right half of the goal and probably save the second header.

“If you are allowed to rugby tackle the goalkeeper and play on, then that’s a different game than what I’m used to.

“It puts us 2-1 down and we’re very annoyed in both instances that the goals have been allowed. I was talking about how difficult it is to win trebles and we turn up today, we get a few decisions against us and that’s what happens.”

Schalk added a third while a missed penalty from Leigh Griffiths ending Celtic’s hopes of claiming a domestic treble this season.

And shotstopper believes Dutch striker Schalk was cute as he won the penalty that brought his side back into the game following Gary Mackay-Steven’s first minute opener.

He said: “The boy [Schalk] has gone through and he’s overrun the ball a little bit and he’s actually ended up getting something better than a goal with the sending-off and a penalty.

“It ends up with a goal and we’re down to 10 men. I think he’s looking for it, it’s clever striking play and I think that’s exactly what he wanted and he got it.

“There wasn’t a great deal of contact, but if you go down then it’s very difficult for the referee to see when he’s behind it whether there is any contact or not.

“The linesman can help him out there but certainly I didn’t think there was an awful lot in it.”