CRAIG GORDON is convinced Celtic can home in on a place in Europe after Christmas.

Brendan Rodgers’ side are preparing for Thursday’s Europa League Group B encounter with RB Leipzig at Parkhead where a win is top priority.

The Hoops lost 2-0 in the RB Arena last month to drop three points behind the Bundesliga outfit while RB Salzburg top the section with maximum points after three successive triumphs.

However, the Scotland international keeper has warned no-one should write off the seven-in-a-row champions.

A defiant Gordon said: “We believe we are still in the group and there were things we saw from them, and in our performance, that gives us hope in Glasgow.

“The home games were always going to be vital for us. We’ve got Leipzig and Salzburg to come here while we always felt we would need to pick up something away from home at some point.

“We haven’t managed to do that so far, but there was some encouragement in Germany. We created chances. We didn’t managed to take them and that’s what you need to do at this level.

“That could be the difference at Celtic Park.”

Gordon also rubbished suggestions the team had taken their eye off the ball in Europe to concentrate on their domestic dominance as they bid for a remarkable treble treble.

Rodgers’ men are already in the Batfred League Cup Final where they will meet Aberdeen at Hampden on December 2 and they moved to within a point of Hearts with a game in hand following their five-goal mauling of the Edinburgh side at the weekend. 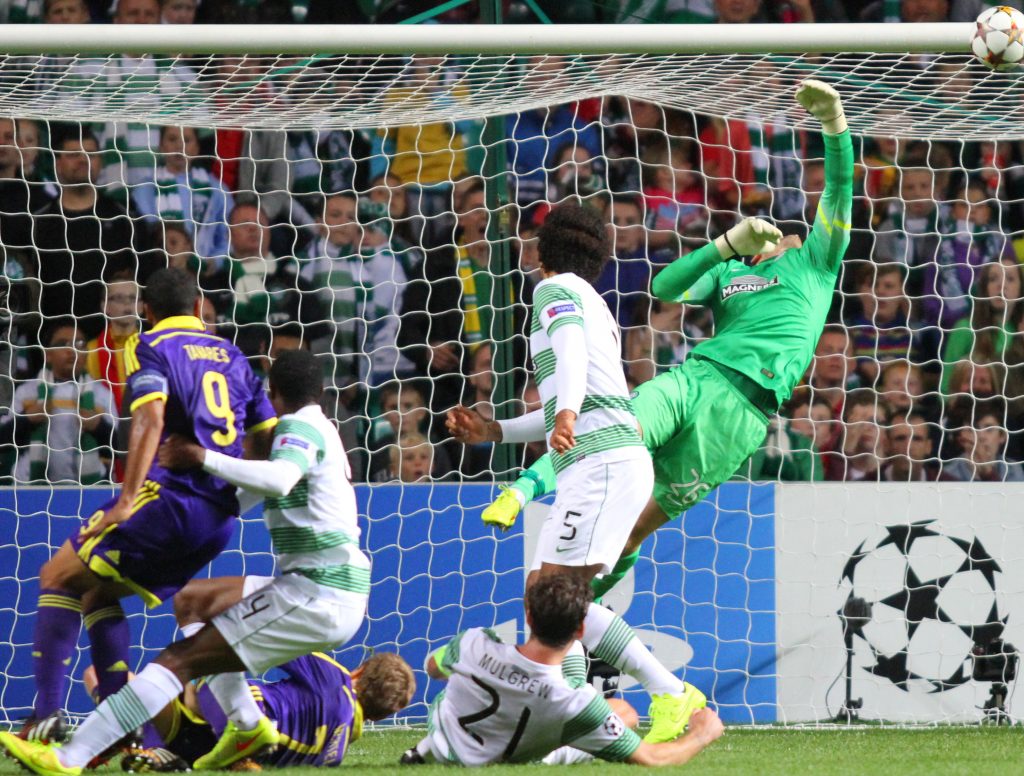 HOOPS’ OOPS…Craig Gordon is left helpless as Maribor score the winning goal at Parkhead in 2014.

The 35-year-old shotstopper, who has now played 60 European ties for the side, said: “We had a team out in the first game in Germany that was full of legs and willing to cover every blade of grass.

“We wanted to create chances and try to nick a goal. We almost managed it on a couple of occasions, but there were a few defensive lapses.

“We tried to stick to our game plan and it worked at times. We didn’t score, which we wanted to do, and we were punished at the other end.

“We are trying to compete in the competitions in Scotland, but we want to do well in Europe. We ALWAYS set out to try to win games, regardless of the competition.”

Gordon made a couple of good stops in Leipzig after the Hoops had conceded twice in the space of four first-half minutes.

He added: “You never know how important these saves can be. The funny thing was, I didn’t have too many saves over there and they didn’t create that many chances.

“That was the most disappointing thing. It was tough to lose the game the way we did.

“We had chances ourselves. Odsonne Edouard had an opportunity early on and then you look at the one for Olivier Ntcham late on. At 2-1, it would have given us a great last five minutes, but you never know how important these moments will be.

“The goals we conceded were quite difficult to take.

“It’s something that’s happening now and again to us. There was a bit of good fortune in that the ball fell right to their guys in the middle of the goal. They had free shots at it for both goals.”

Gordon will be hoping for more cover from Dedryck Boyata and Co on Thursday while Edouard and his frontline colleagues will be tasked with getting the goals that will change the complexion of the group.

The message is simple – never dismiss this Celtic set of players.