The Celtic keeper had won EVERY single one of the 29-and-a-half games in which he had played this season until Sunday.

Gordon had missed the previous blip on the otherwise 100 per cent record – the 2-2 draw with Caley Thistle in Inverness on September 18.

On that occasion, Jags sub Alex Fisher headed a stoppage-time effort beyond Dorus de Vries to halt Brendan Rodgers’ side for the first time in his debut season in charge of the Hoops. 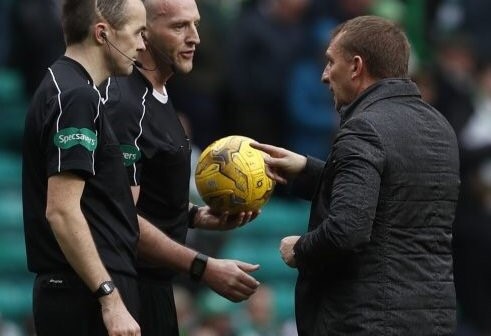 The Irishman had brought in his former Swansea shotstopper in a £400,000 deal from Nottingham Forest and handed him his first appearance to Gordon’s exclusion in the 4-1 win over Aberdeen at Parkhead on August 27.

However, the 34-year-old Scotland international No.1, who played in all four League Cup-ties and didn’t concede a goal, made his Premiership comeback after half-time in the game against Kilmarnock a week after the stalemate in the Highland capital.

Dutchman De Vries injured his back attempting to stop an incredible 40-yard drive from Soulemayne Coulibaly that gave the Rugby Park outfit the lead.

Moussa Dembele struck twice before the interval and Gordon made his reappearance for the second period.

And the agile netminder remained between the sticks as he racked up a string of victories.

Veteran Hill brought the impressive run to an end three minutes from time at the weekend.

Gordon did well to touch away a stinging drive from Emerson Hyndman and might have expected better protection from his fellow-defender who were slow to prevent the Ibrox veteran ramming home the rebound from practically on the goal-line.

The former £9million Sunderland star said: “There’s always a little bit of frustration when you’re ahead going into the final minutes of a game and you concede a goal.

“Look at the amount of times we’ve seen games out at 1-0 this season.

“But we didn’t manage to do it on this occasion.

“We didn’t play particularly well against Rangers (sic).We can play an awful lot better than that and we know that.”

Gordon wouldn’t get drawn into the late controversy when the Hoops claimed a penalty-kick after Leigh Griffiths was sent sprawling following a challenge from Hill.

He said: “I was quite far away, of course, and couldn’t see it.

“Some of my team-mates watched the incident on TV and were convinced it was a spot-kick.”

Referee Bobby Madden came in for criticism from the champions and boss Rodgers revealed Hill had told him afterwards he “had got away with one”.

Gordon reckoned it was a hard-fought encounter and was surprised no-one saw red.

He said: “The match officials see what is going on and deal with it accordingly.

“Certainly, there were a few big tackles going in that could have resulted in some heavier punishment.

“To finish with 22 players on the pitch, sometimes I don’t know how that quite happens.”

Gordon, though, wasn’t too downhearted he – and Celtic – lost their victorious march towards their sixth successive Premiership title and possibly their first treble in 16 years.

He added: “We’re still undefeated domestically. so let’s see how long that can last.

“There aren’t too many games left now, so we just go again and keep on trying to win games.”

Last month, Rodgers rewarded Gordon with an enhanced three-year deal as he responded to the challenge from 35-year-old De Vries.

The Hoops gaffer revealed: “I told him after Sunday’s game I think he is now one of the top goalkeepers in Europe.”