CELTIC hero Peter Grant believes his old club were quite right to keep Dedryck Boyata, despite the defender coming out of contract in 10 months’ time.

The former Hoops stalwart, who made 350 appearances in a 15-year career, has always insisted no individual is bigger than the club.

And Grant, who is assistant boss to Alex McLeish as they prepare Scotland for tomorrow night’s friendly against Belgium, also revealed he is an admirer of Boyata, who is in the rival squad for the Hampden game.

He said: “I never ever kissed the badge because you never knew what might happen, the next day you could’ve been away.

“That annoys me a little bit these days, they tell everybody how great they are and how much the club means to them — then the next day they’re gone.

“Boyata made a decision, Celtic were strong on it. He’s still here.

“He’s come on leaps and bounds with Celtic after a period where he was going nowhere. When me and Alex were at Nottingham Forest for the short period of time, we actually tried to get Boyata in on loan. But that fell down.

“Celtic have stood strong, which I feel was important. If you’ve got a player under contract and you want him to stay, then it’s important you hold him to that.

“In certain situations, you just can’t, for whatever reason, and you have to move him on. It can also be for the betterment of the group. Sometimes a manager has got to come out and back this one and that one. But it can also be for the detriment if you keep a certain player.” 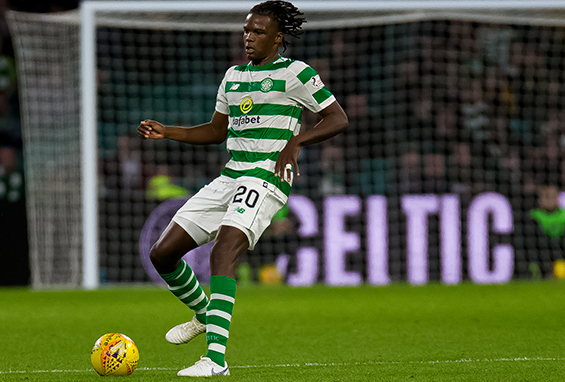 CELTIC ARE BEHIND YOU…Dedryck Boyata after returning to the fold.

Former midfield competitor Grant continued: “I thought Boyata was excellent against Rangers, I thought he defended the middle of his box exceptionally well. Crossed balls into the box he defended ever so well.

“It was as good as I’ve seen him play. Sometimes that bit of pressure coming from the supporters – the ‘You’re Not Fit To Wear The Jersey’ banner – can make you go and stand up against it, be strong enough to take it. Especially at a Celtic or Rangers.

“I’ve said before, down in England you go through nothing like you do up here. When you get brought up with the whole Celtic and Rangers thing and then go down to England you can realise why so many players have failed at Parkhead and Ibrox. It’s everything that goes with it, the intense pressure and scrutiny.

“There’s the phone-ins, the social media, it’s just 24/7. You don’t get that in England, nowhere near it. Boys can hide away down there, they can go somewhere and get their coffee, not be bothered.

“Here? Well, you lose a game with Celtic or Rangers and you need to hide for six weeks. I used to do that a helluva lot during my period — hide from both sets of supporters!

“But, Boyata’s done exceptionally well. He was excellent against Rangers.”

“Testimonials are just going to become rarer and rarer. I think you get a testimonial for THREE years now!”

Boyata, who was the subject of a failed £9million bid from Fulham before the Premier League transfer deadline on August 9, will be free to talk to interested clubs in January.

The World Cup defender will then be allowed to leave Parkhead at the end of the season for nothing.