Celtic Quick News on News Now
You are at:Home»Latest News»GREEN LIGHT FOR 2,000 FANS IN PARADISE
By CQN Magazine on 9th July 2021 Latest News

CELTIC fans are to be allowed back into Parkhead for the first time since the 5-0 win over St Mirren on March 7 2020.

The Hoops will have 2,000 supporters in the ground for the pre-season friendly against Preston North End on Saturday July 17.

It’s not exactly the number the club or the followers hoped for, but, at least, it is a start.

The Parkhead outfit said: “We’re delighted to announce the Club has been given permission for 2,000 supporters to attend our pre-season friendly match against Preston North End at Celtic Park on Saturday, July 17. This is the maximum number of supporters we are allowed to welcome back to Paradise presently.

“We are using this as our own preparatory event, under COVID-19 protocols, which will allow us to use and assess all areas of the stadium. Ticket allocation has been split among Season Ticket holders and Club contractual obligations.

PARADISE…a packed Celtic Park – and we’re hoping to see capacity crowds in the east end of Glasgow this season.

“All Season Ticket Holders who registered their My Celtic Matchday application up until 5pm on Wednesday were included in the ballot, the process of which is now underway.

“As the friendly match is a preparatory event, it is independent of future ballots for upcoming competitive fixtures – although any supporters who are successful for this match will be ineligible for any ballot for our match against West Ham on July 24, therefore giving other supporters the opportunity to attend.

“Supporters who have been successful in the ballot will be informed via email as soon as possible – we ask that you check your junk or spam folders in case this is missed. Match tickets will be sent in a subsequent email, which must be printed at home. Entry to the stadium will only be possible with the physical print at home ticket. 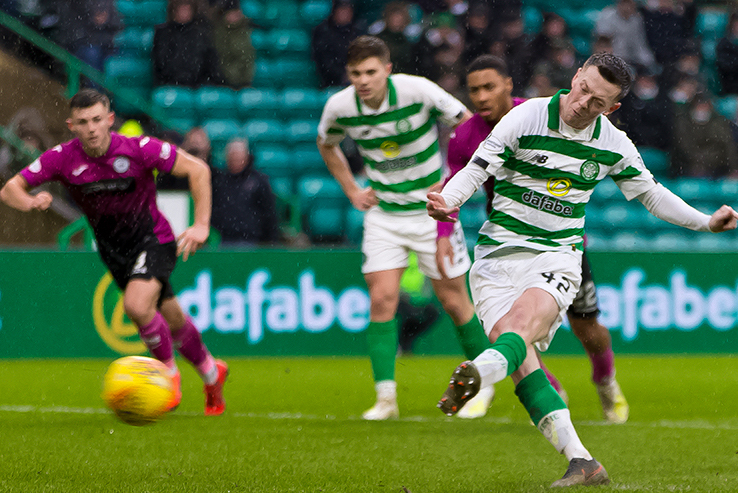 THE LAST STRIKE…Callum McGregor nets a penalty-kick for the fifth goal against St Mirren in March 2020.

“Your allocated seat, entry time and stadium entry point will be included on your print at home ticket. Please note, the seat allocated to you may be different to your regular Season Ticket seat.

“We ask that you familiarise yourself with our new protocols for reduced capacity matches at Celtic Park – full details of which can be found on the Celtic website here.”

Ange Postecoglou is currently in charge of the squad in their pre-season training camp in Wales.

The team – with goals from Albian Ajeti, Owen Moffat and Odsonne Edouard – beat League One side Sheffield Wednesday 3-1 in Newport in midweek.

The match was played nehind closed doors and it will be the same situation when the Hoops face Charlton at the same venue tomorrow afternoon.

Postecoglou’s third match will be at Bristol City on Wednesday before they return to take on Scott Sinclair and Co in the east end of Glasgow a week tomorrow.