NEIL LENNON has been given a double boost before Sunday’s High Noon showdown with Steven Gerrard’s Ibrox side at Parkhead.

Left-back Kieran Tierney, who returned early from the Scotland international squad last week, is poised to get the green light for the game where the champions can move 13 points ahead at the top of the Premiership as they zero in on their eighth successive title.

And winger James Forrest, who sustained a muscle injury after coming on as a second-half substitute in the 2-0 victory over San Marino on Sunday, is also expected to be fit and raring to go for the crucial confrontation.

Tierney was expected to play in the opening Euro 2020 qualifier against Kazakhstan eight days ago, but withdrew with a calf complaint and was then sent back to Lennoxtown.

However, Lennon is hopeful that the attacking defender will take his place against the Ibrox side.

The Hoops interim gaffer, speaking to Celtic TV, said: “Kieran, obviously, we are going to assess him over the next couple of days and see how he us, but he is looking okay as regards the weekend.” 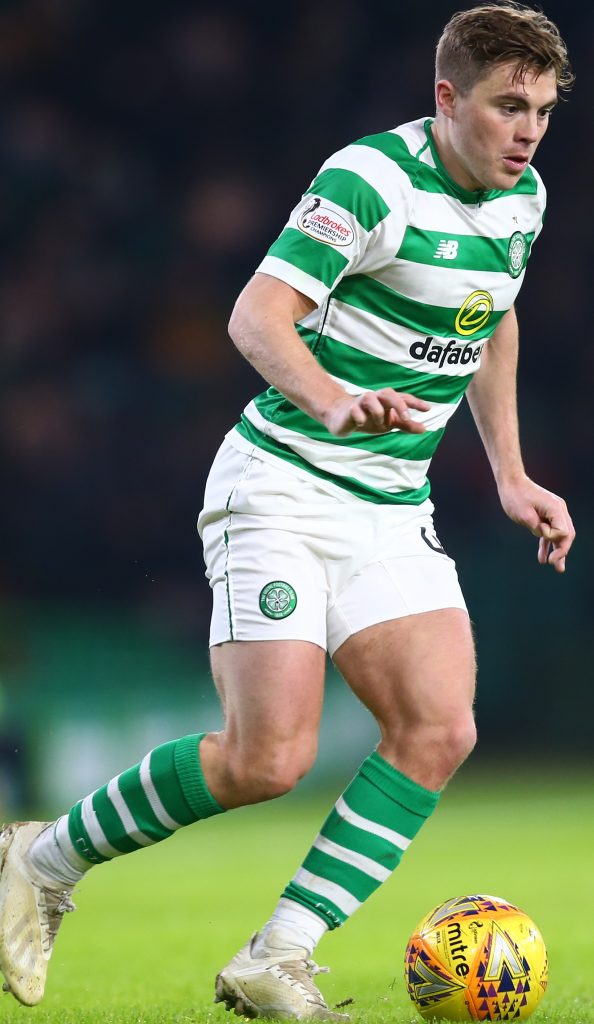 ON A WING AND PRAYER…James Forrest hopes to play on Sunday.

On Forrest, he said: “We’re hoping he’ll train on Friday and Saturday.”

Lennon also confirmed keeper Scott Bain, midfielder Callum McGregor and forward Oliver Burke have all come back from international duty without any problems.

However, the Irishman has other knocks within his squad, but feels his group could be as strong as it’s been since he returned to take over from Brendan Rodgers last month.

Olivier Ntcham and Tom Rogic have both maintained their rate of recovery to move up the selection scale and the gaffer is delighted with the situation.

He added: “In terms of the rest of them, Mikael Lustig got a dead leg and, again, that will take a bit of time.

“Bayo got a groin strain and he’s being assessed, but Kris Ajer came through two games with Norway okay, so we are eachy-peachy, really.

“There are a couple of niggles there, but nothing too serious.

“Olivier is back training day in and day out and Tom is back on the grass.

“He’s had a couple of really good days training, so, hopefully, both of them will be in contention for the squad at the weekend, which is great.”