CELTIC’S top scorer Kyogo Furuhashi is poised for a dramatic first-team comeback at Ibrox in the midday confrontation tomorrow.

The 16-goal striker has not kicked a ball this year after limping off with a recurrence of his hamstring problem in the 3-1 win over St Johnstone in Perth on Boxing Day.

But the Japanese international WILL be in Ange Postecoglou’s squad for the encounter where a victory will double the team’s advantage to six points in their quest for an extraordinary title success.

The Hoops boss confirmed Kyogo will be with the travelling party for the confrontation against Giovanni van Bronckhorst’s men who were thumped 3-0 in the east end of Glasgow the last time the teams locked horns in February.

DOWN AND OUT…Kyogo Furuhashi has missed sixteen consecutive games this year.

Reacting to positive news about the club’s talisman, Postecoglou said: “It always gives the players a lift.

“He’s obviously a very good player and had a fantastic first half of the season.

“He’s already had a massive impact and once he’s up and ready and out there again I’m sure he’ll be looking to make a similar impact.

“He’s buzzing as well because he gets an opportunity to be involved and do the things he loves, so it’s great.”

The crocked James Forrest will miss out, but Australian playmaker Tom Rogic, who hirpled outy of the 4-0 win over Ross County at Parkhead last month, has recovered from his ankle injury and is available. 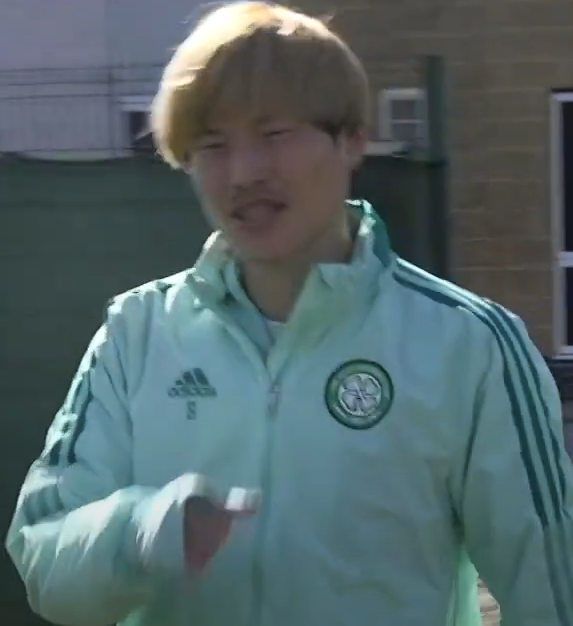 GREEN FOR GO…Kyogo Furuhashi in training at Lennoxtown yesterday.

The Hoops are unbeaten in 31 domestic matches and Postecoglou, speaking to the BBC, added: “Our approach has been the same all season, whether home or away and it will be the same on Sunday.

“We’re going to set up our team to try to impose our football on the game because that gives us the best chance of success.

“For us it’s not about adjusting what we do, it’s about making sure the game is played in the areas we want it to be played.

“It’s obviously a massive game and one we’re looking forward to. This is the position we wanted to be in.

“I’d hate to be playing a big game like this and there was no consequence to it because we were too far behind. If you’re in this situation you can’t be not feeling good about it.”