And the 36-year-old Republic of Ireland international winger is looking forward to wearing green again!

McGeady, who left Sunderland at the end of his contract after helping the club to promotion to the Championship, has reunited with his ex-Wearsiders’ boss Lee Johnson and can’t wait to get back into a green and white strip.

The flamboyant attacker, who who won seven medals including four titles before quitting the Hoops in a £9million move to Spartak Moscow in August 2010, said: “I’m absolutely delighted to be here. As soon as I spoke to Lee Johnson it was an absolute no-brainer for me. 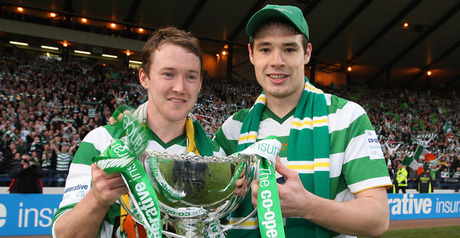 IRISH EYES ARE SMILING…goalscorers Aiden McGeady and Darren O’Dea with the League Cup in 2010.

“To be honest, I don’t think there could have been a better fit. It has always been a club that I have had slight affiliation towards, I don’t know why.

“Maybe because they play in green and white, maybe because Hibernian is the old Roman name for Ireland – there has always been something about Hibs that I have liked.”

McGeady, speaking to the Daily Record, added: “As soon as the manager made contact with me, I was like: ‘Brilliant, let’s get this done’.

“The aim for this season needs to be to finish as high as possible in the league. We need to improve on last season that is for sure, but I want to win things, I am here to win trophies and push the Old Firm all the way.”

The nearest the Edinburgh club came to winning an honour last term was when they faced Ange Postecoglou’s side in the Premier Sports League Cup Final at Hampden six days before Christmas.

The Leith outfit were a goal ahead at one stage shortly after the interval, but a double salvo from Kyogo Furuhashi made certain the trophy was heading for Parkhead to open the Greek-Australian gaffer’s silverware account which, of course, was followed five months later with the Premiership title.

Glasgow-born McGeady, who won 93 Irish caps, is Hibs’ eighth signing of the summer and he will reunite with former Celtic team-mate David Marshall who arrived a fortnight ago after leaving Queens Park Rangers.