CELTIC have been given the green light to sign striker Daizan Maeda – with some Japanese news outlets already considering the deal to be “done”.

Details have yet to be announced, but it looks as though the international hitman – the country’s top goalscorer last season with 23 strikes – will initially join on loan before the deal becomes permanent.

Ange Postecoglou, of course, knows all about the player’s qualities after signing him for Yokohama F Marinos on February 1 this year when he paid £765,000 to J-League rivals Matsumoto Yama and the exciting 24-year-old attacker is now rated in the £1.7million category. 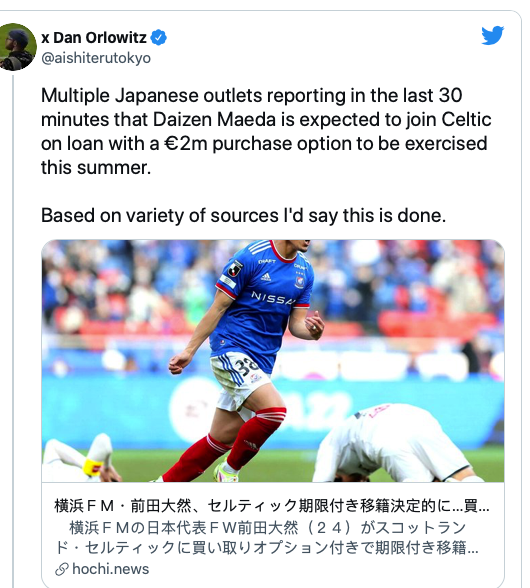 The Greek-Australian gaffer reckons Maeda, who can also play wide, will fit straight in to his Hoops strategy in which his compatriot Kyogo Furuhashi has flourished since his £4.6million arrival from Vissel Kobe in late July. The pacy raider has already claimed 16 goals on his way to becoming a firm favourite with the Parkhead faithful.

A new frontline leader is a priority for Postecoglou with back-up double-act Giorgos Giakoumakis, the £2.5 million buy from Dutch outfit VVV-Venlo in the summer, and Albian Ajeti, a £5million purchase from West Ham in August 2020, both currently sidelined with knee problems and a hamstring strain respectively.

Kyogo, who missed five games after sustaining an injury while on World Cup duty in September, has also been struggling in recent weeks for full fitness. ROARING SUCCESS…Kyogo Furuhashi celebrates one of his double in Celtic’s Premier Sports League Cup Final win over Hibs at Hampden this month.
Maeda could be the first of three acquisitions from the J-League with left-sided Reo Hatate and midfielder Yosuke Idegushi also linked with a switch to the east end of Glasgow.

It now looks only a matter of waiting until the transfer window opens on Saturday before Maeda is unveiled as the THIRTEENTH recruit at Parkhead in seven months following the dozen who arrived in the summer.

According to various outlets in Japan, including the well-placed Hochi News, the Maeda deal is now nearing completion with top football journalist Dan Orlowitz even tweeting that it is “done.”