Celtic Quick News on News Now
You are at:Home»Latest News»GRIFF ADMITS DREAD OF BEING AXED
By CQN Magazine on 23rd July 2019 Latest News

LEIGH GRIFFITHS has revealed he feared Celtic would rip up the four-year contract he signed in September last year.

The prolific Scotland international striker penned the deal just over two weeks after scoring his 100th goal for the club in the 3-0 win over FK Sudova in the Europa League play-off at Parkhead on August 30.

Griffiths agreed the extension that would keep him at Parkhead until he was 32.

However, during the darkest days of his depression while he spent six months away from football, the frontman admitted he thought he would be AXED by the champions.

The fans’ favourite was given a rousing reception when he came onto the pitch in last week’s 2-1 Champions League qualifying triumph over FK Sarajevo with only 13 minutes left to play. He said the reaction from the supporters “made the hairs on my neck stand up” as he stood on the touchline before replacing Odsonne Edouard.

It was a dramatic contrast to the times when he thought his career in the hoops was over.

GETTING THE MESSAGE…Celtic fans show their support for Leigh Griffiths in December.

Griffiths, speaking to the Scottish Sun, said: “It would have been easy for the club to cut ties altogether and say: ‘Look, we’ll give you time off, but in the summer it’s best if we go our separate ways’.

“But, fair play to them, they told me to take the time off and to come back and start again. That’s what I’m trying to do.

“The manager came to me and said that it’s a clean slate this season and to show everyone what I’m all about and to get back to my best.

“They don’t want me to just play for Celtic.

“They want me to be okay after I finish my football career.

“I could be here for ages talking about names. These guys want me at the club because they know what I can do. 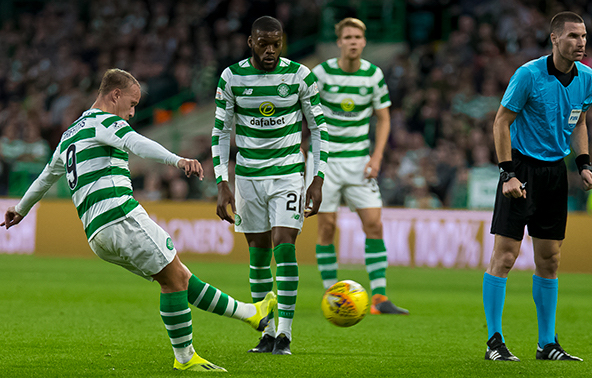 HAIL THE CENTURIAN…Leigh Griffiths scores his 100th Celtic goal with a trademark free-kick against FK Sudova in August.

“They know I can be a big success and, most importantly, that I can score goals.

“They’ve had players in the past who might have been a bit of a problem, but couldn’t score goals or do their job.

“I can — it’s just about getting my mindset right and getting focused on playing well, training well and, most importantly, feeling well off the park.

“This feels like a family.  Everywhere you go there’s always someone coming up to you and saying: ‘It’s great to have you back’ or ‘It’s great to see you looking so well’.

“It’s been great — the number of people who came up to me in the street, in the supermarket or wherever I’ve been to say: ‘I’m delighted you are back’.

“You still get some negative people who start vicious rumours about this and that and why I’ve been off.

Griffiths is now in line for a place in the Hoops squad for tomorrow night’s second round Champions League qualifier against Estonia’s Nomme Klaju.

The 13-minute cameo against FK Sarajevo was the pacy hitman’s first competitive action of 2019 and he is eager to make up for lost time.

And to prove he was worth the bumper four-year contract he signed 10 months ago.