LEIGH GRIFFITHS reckons the Celtic supporters will be hurting even more than the players after Tuesday’s Champions League exit.

A packed Parkhead was stunned as the Romanians of Cluj won 4-3 in a topsy-turvy encounter that saw the Hoops, following last week’s 1-1 draw away from home, crash out off Europe’s elite competition.

The 28-year-old Scotland international striker, who came on too late in the contest to turn things around, admitted he does not expect a full house when the Hoops kick off their defence of the League Cup against Championship outfit Dunfermline in the east end of Glasgow tomorrow afternoon.

Griffiths, speaking to STV, said: “We win as a team and lose as a team. But the fans are more hurt than we are and rightly so.

“They pay good money to come and watch and expect us to get to the Champions League. It’s very difficult to get there, but the fans’ expectations have grown over the last few seasons.

“I don’t think they’ll be happy. Am I expecting a sell-out crowd? No. But they are entitled to show their frustration. 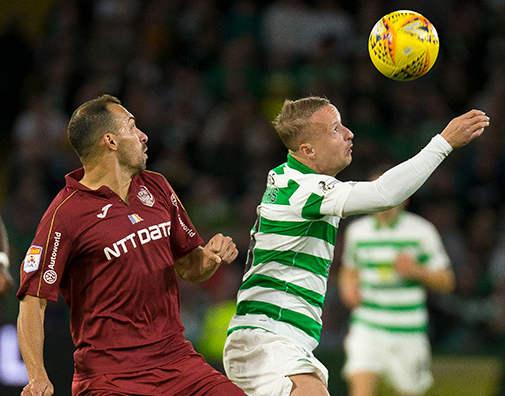 EURO EXIT AHEAD…Leigh Griffiths was too late to save Celtic against Cluj.

“It’s up to us to put performances on to put bums back on seats.”

Griffiths, who has scored three goals as he makes his way back into the team after missing a chunk of last season due to personal issues, also made a rallying call to his team-mates after the disappointment at failure at the highest level.

He added: “As you can probably guess, the mood in the squad hasn’t been the greatest, but we need to pick ourselves back up again.

“Tomorrow we need to bounce back and show what we’re all about.

“Everybody knew how disappointed we were from the players through to the fans. We heard the frustration at the final whistle.

“It just wasn’t to be this year, not just for them, but for us, as well. We put so much into pre-season and sometimes you just need luck to go with you.

“We’ve got a Cup game tomorrow and we want to go on that win that. Dunfermline will make it difficult for us and the defence of the trophy starts now.”