The one-time Hoops frontman made some blunt comments about Neil Lennon’s player as he questioned his fitness levels, as CQN reported last week.

Griffiths, who scored against the Czechs after coming on as a 60th-minute substitute, has started only one game in a monumental campaign and that brought a stinging reaction from Sutton. The 30-year-old Scotland forward took exception to the remarks and sought out the media pundit to have a frank exchange.

However, Sutton has APPLAUDED the Parkhead marksman for the courage he displayed on duty for his nation in the vital Euro Play-Off Final against Serbia in Belgrade on Thursday night.

With the game tied at 1-1 and with only three minutes remaining of extra-time, Steve Clarke sent on Griffiths for Stephen O’Donnell with spot-kicks looming. It was a shrewd piece of management from the international gaffer. 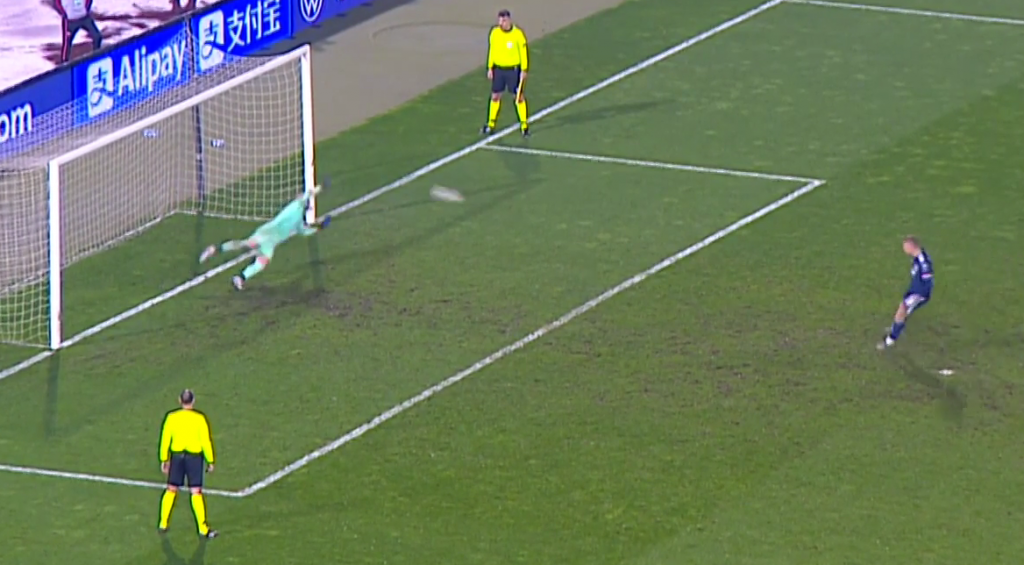 SPOT ON…Leigh Griffiths slams in his penalty-kick against Serbia.

The responsibility of taking Scotland’s first kick fell to the Celt who had barely touched the ball in open play. However, he didn’t hesitate with an unerring effort wide of the despairing Predrag Rajkovic. That opened the way for club and country colleague Callum McGregor, Scott McTominay, Oli McBurnie and Kenny McLean to follow his lead and place their efforts into the Serbian net.

Then came the heroics from David Marshall with his full-length dive to push away Aleksander Mitrovic’s attempt – and the Scots had booked their place in the finals of a major tournament for the first time since the World Cup in France in 1998.

Sutton, speaking in the Daily Record, said: “I know we have had our run-ins recently, but credit to Leigh Griffiths. He came on at the end and had the bravery to step up and take that first penalty.

“That takes guts because it’s such a crucial moment in a shoot-out. Miss that one and it’s an uphill struggle – but he smashed it and showed his big-game mentality.

“Celtic will get the benefit of that kind of boost and it’ll be the same for Ryan Christie.

“He proved again what a big player he is in Serbia.

“He was immense. You have to admire his attitude as well as his versatility, to be able play so many positions at such a high level.

“No matter the job he is asked to do, he gives it absolutely everything.

“We all know he can produce moments of magic, but he combines it with a ferocious work-rate. Christie is a manager’s dream.”