LEIGH GRIFFITHS is expected to find out today if he faces a suspension following allegations on a stamp on Hamilton Accies’ Sam Woods.

The comeback Celtic striker was involved in a flashpoint incident with the midfielder during the first-half of the Hoops’ 4-1 win at the FYO Stadium on Sunday, as CQN reported yesterday.There was a tangle between the pair, but referee Nick Walsh took no immediate action although he booked the Scotland international frontman and home defender Alex Gogic for a bout of pushing and shoving in the brief flare-up that followed.

Twenty-nine-year-old Griffiths is now awaiting a response from the SFA and is now likely to discover if there is a case to answer with Accies boss Brian Rice and coach Guillaume Beuzelin insisting it was an ordering-off offence. 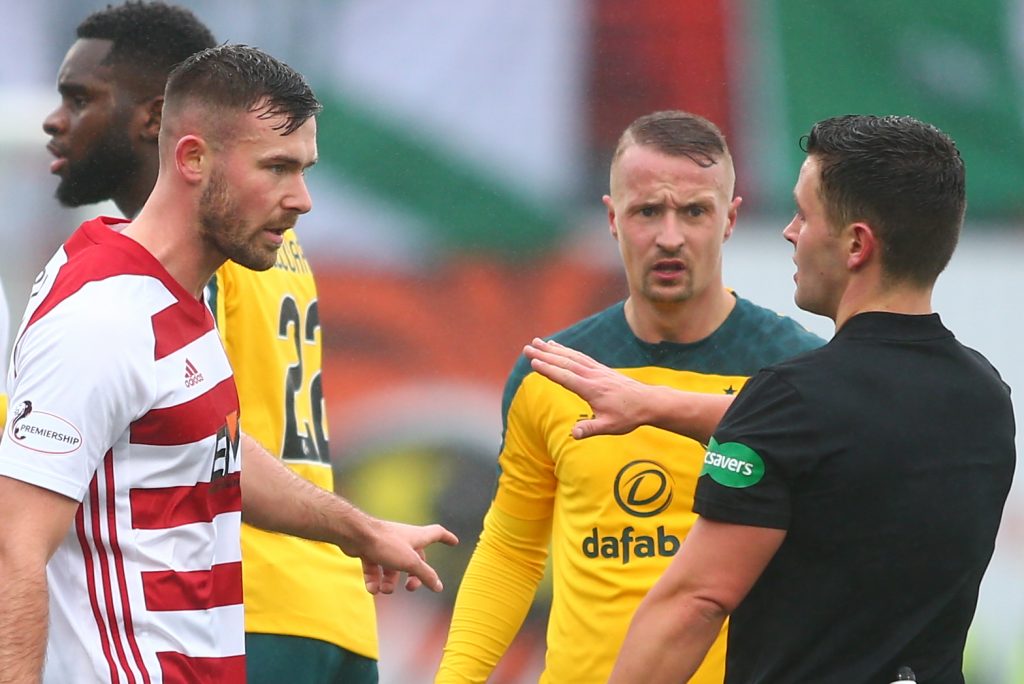 CALM DOWN…referee Nick Walsh has a word with Leigh Griffiths and Sam Woods after the  flashpoint incident.

The ex-Motherwell forward, speaking in the Daily Record, said: “I do think that the SFA will look at it because there’s an argument that the defender had a hold of his foot, but I think he could have avoided the defender.

“So, I wouldn’t be surprised if they have a look at it and potentially add to the punishment.

“I can see the referee being confused over whether Leigh could have got out of the way.

“I think he was very fortunate to stay on the pitch and, as I said, I think the SFA will look at it and probably look to add to the punishment.”

The SFA controversially banned Hoops midfielder Ryan Christie for an incident with Alfredo Morelos before the turn of the year after referee Kevin Clancy hadn’t yellow-carded the playmaker, but awarded Steven Gerrard’s outfit a free-kick.

Compliance officer Clare Whyte and her backroom team later adjudged the clash as violent conduct and slapped a suspension on the player who made his first appearance of 2020 against Accies as a second-half substitute.