NEIL LENNON insists he will back Leigh Griffiths “to the hilt” after a flashpoint moment with Kilmarnock fans during Celtic’s 3-1 win at Rugby Park last night.

The comeback Bhoy, who scored his second goal in two games as he netted to make it 2-0, was involved in a flare-up with the home support when he was substituted late in the game that saw the champions remain two points clear at the Premiership pinnacle.

Griffiths appeared to throw tie-up tape in the direction of a fan after taking stick from the stands as he prepared to take his place on the bench.

Lennon is adamant his player has no case to answer after being on the end of a stream of abuse from foul-mouthed individuals wearing Killie colours.

The Hoops boss, speaking to the Daily Record, said: “He threw a bit of tape on the ground. I don’t know how you can say he threw it at somebody or towards somebody. People take off tape and throw it away, so to me there is nothing in it. 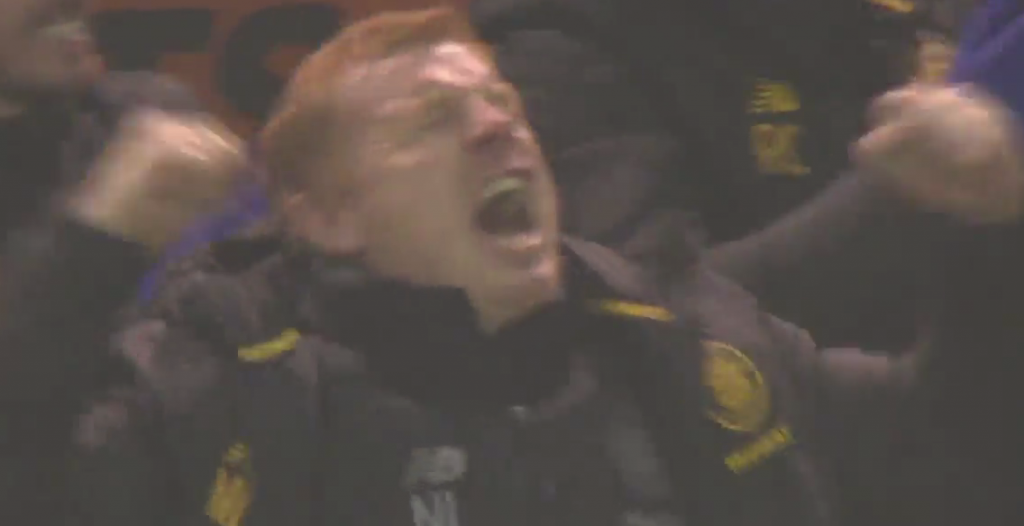 IN WITH A SHOUT…Neil Lennon expresses his joy as Celtic triumph.

“I asked him if anything went on and he said no and he was backed up by his team-mates. If there is going to be something made of this, then I will be at the front of the queue backing him up.

“He was getting a lot of unsavoury abuse.

“Leigh was taking some serious abuse and he didn’t react in a malicious way at all. He’s not the perpetrator – the abuse was totally uncalled for.

“I thought his behaviour was exemplary. He didn’t do anything wrong. People can blow it up, but it was nothing.

“He always seems to get controversy surrounding him, but I’ll back him to the hilt on this one.

“I wouldn’t say it overstepped the mark, but it was abuse which was uncalled for. The kid had played well, he hadn’t got himself into any bother on the pitch.

“He goes and sits down and gets abuse from supporters. In this day and age, we have to accept that and behave in a sanitised way. He did.

“You’re looking for a story that’s just not there.”

Griffiths also aimed his goal celebration at TV pundit Kris Boyd who has been highly critical of the frontman.

Lennon hailed his side for coming through a stiff test in Ayrshire. Odsonne Edouard, with his 18th of the season, and Griffiths fired Celtic in front before Nicke Kabamba pulled one back and Christopher Jullien powered in the third goal with an unstoppable header from a perfect delivery from Griffiths at a left-wing corner-kick.

He added: “Leigh is not the whole story here. Edouard was brilliant, Olivier Ntcham was brilliant and Scott Brown and Callum McGregor have been outstanding. Chris Jullien scored a marvellous header.

“It was an outstanding performance. It’s a difficult place to come, sometimes the surface can be difficult, but we made easy weather of it.

“We had three outstanding goals, but, more importantly, the performance was top class. The players’ attitude was top class. I’m absolutely delighted in the context of the season, that’s as good as we’ve played in a while.”

* BACK IN THE OLD ROUTINE