CQN asked in January if Leigh Griffiths was a genius or a goon. Unfortunately, we have to pose the same question today with the striker’s career at the club on the brink of extinction.

It’s a sad and sorry situation for a popular player who has scored 122 goals since Neil Lennon paid Wolves £1.2million for his services on January 31 2014.

Now in April, we revist what was written three months ago to measure the progress of the frontman who will be 31 in August.

We invite our readers to update their thoughts on one of the most natural goalscorers we have seen at Celtic in recent years.

Here is how CQN saw the situation on January 31.

LEIGH GRIFFITHS was hailed as “a genius” by Neil Lennon just last month.

The same player was hauled off at the interval yesterday by the frustrated manager after 45 anonymous minutes with St Mirren leading 2-1 and on their way to their first league win at Parkhead since 1990.

It was a startling all-change scenario from Hampden on December 20 when the 30-year-old Scotland international came off the substitutes’ bench to wallop in the third goal in the delayed Scottish Cup Final against Hearts.

Griifiths was introduced nine minutes into extra-time for hit-or-miss Odsonne Edouard who had scored with a cheeky penalty-kick, but then had passed up three reasonable chances as the Tynecastle side rallied after trailing 2-0. Six minutes after his arrival, the hitman thumped the ball into the roof of the net following a right-wing corner-kick.

The Hoops’ vulnerable defence surrendered once again which led the showpiece showdown to a penalty-kick decider in which Griffiths swept in the opener, Ryan Christie saw his effort pushed away by former team-mate Craig Gordon and Conor Hazard, the rookie keeper, saved twice to make sure the silverware headed back to the east end of Glasgow.

Lennon was clearly ecstatic in the aftermath of the team achieving the phenomenal quadruple treble and was quick to praise his controversial frontman, as CQN reported at the time. 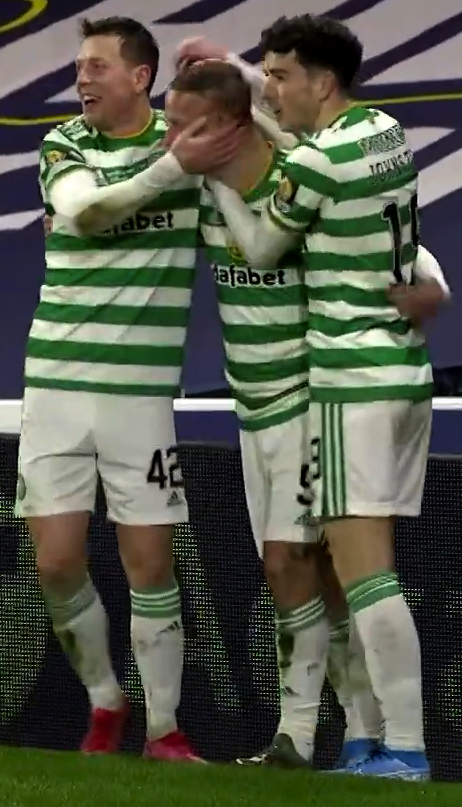 HAMPDEN HERO…Leigh Griffiths is congratulated by Callum McGregor and Mikey Johnston after his strike against Hearts.

According to the smiling gaffer, he was a genius and a phenomenon for his contribution to a rare day of celebration in the club’s season from hell.

In that memorable moment, it looked as though peace had finally broken out between the manager and the player who had been axed from the squad’s three-game pre-season tour of France because he had returned from lockdown overweight and out of condition, as far as the Irishman was concerned.

Griffiths eventually came back into the fold and made intermittent appearances, but was rarely on show for 90 minutes.

He struggled to make any sort of impact against the Paisley side in a dour opening 45 minutes yesterday, but, with the team trailing and urgently requiring goals, it was still a bit of a surprise the forward, who has notched over 100 strikes for the club, was left inside with midfielder Tom Rogic coming on in his place.

It was a switch that back-fired with the Aussie international contributing next to nothing in the second-half as the champions lost their third Premiership encounter of a miserable season.

Questions were asked about the non-appearance of Griffiths and the fact Lennon had chosen to bring on a middle-of-the-park operator when he had £8.5million of striking talent on stand-by in the shape of Albian Ajeti and Patryk Klimala.

JOY BHOY…Leigh Griffiths celebrates after hammering in the third goal against Hearts to put Celtic in front.

The under-siege gaffer, speaking to the BBC, said: “I gave Ajeti half an hour today. You could look at Leigh and his contribution, as well.

It was surely a thinly-veiled attack on Griffiths, but others, such as Odsonne Edouard, could have been included.  Griffiths’ strike against Hamilton Accies’ last Wednesday was only his seventh goal of a stop-start campaign where he has made 20 appearances.

He claimed a measly 11 the previous term. The year before that brought in six, although to be fair to the player, he missed a chunk of the campaign while he suffered mental health issues.

In the build-up the game against Jim Goodwin’s worthy winners, Lennon admitted his inability to get his star on the field more regularly this season had been a serious irritation.

“He’s in the team at the minute and he’s in decent form.

“He can get better and still, for me, he can get in better condition, but he’s a wonderful goalscorer and a top talent when he’s on form.” 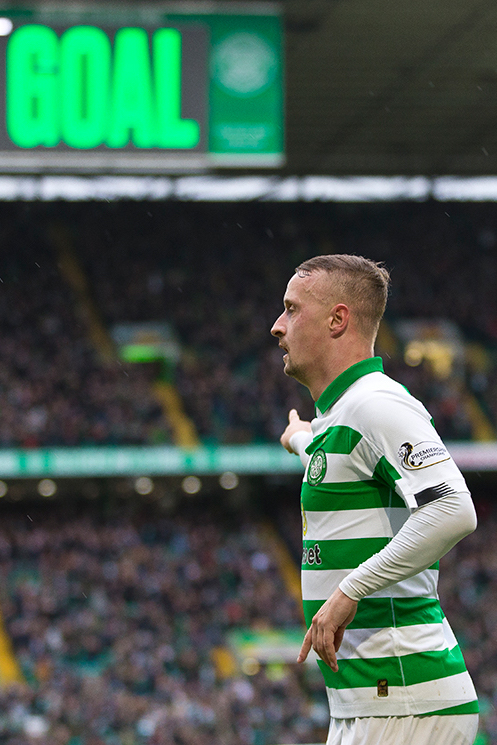 HAPPIER DAYS…Leigh Griffiths on his way to a hat-trick in the 5-0 win over St Mirren in March last year.

Clearly, Griffiths failed to deliver or impress his manager during his 45 minutes against the Saints and it’s back to the drawing board for both the boss and his frontman.

There is obvious friction between the pair, but that should not be allowed to interfere with matters on the field.

Celtic take on Kilmarnock, who sacked boss Alex Dyer after their 3-2 loss against St Johnstone yesterday, at Rugby Park on Tuesday night.

The sorry saga will be played out again in front of Sky Sports cameras with millions of viewers worldwide tuning in.

In the midst of all the innuendo, one thing is certain and Leigh Griffiths will know it – 24 goals in two-and-a-half years is not good enough for someone who rates himself as an international striker.

Lennon criticised the raider for the amount of time he spent on social media during the three months of lockdown last year. The performer played to the gallery as he attempted to lighten the gloom that had settled on the country during fears of the spreading Covid-19 virus.

Griffiths may yet get the opportunity to provide an acceptable answer.

He owes that to his manager and his legions of Celtic followers.