A RELIEVED Brendan Rodgers insists Leigh Griffiths is “smelling the goals” again after his late winner in the 1-0 triumph over St Johnstone in the Betfred League Cup quarter-final in Perth last night.

And the Celtic manager doesn’t have to look too far for the stats to back up his claim – the Scotland international striker has scored ALL of the Hoops’ goals in their last three games!

He netted the only goal of the match to defeat Rosenborg in the opening tie of the Europa League last week after his introduction as a second-half substitute.

He was on target again with a header to give the champions the interval lead against Kilmarnock at Rugby Park on Sunday, but, unfortunately, that wasn’t enough as Steve Clarke’s outfit snatched an unlikely triumph with virtually the last touch of the ball.

And it was the 28-year-old livewire frontman who cemented a place in the last-four of the League Cup against Hearts next month with his 83rd minute strike against the Saints – his 103rd goal for the Bhoys.

Rodgers said: “Leigh could have had a hat-trick, but what is important is that he is smelling the goals again. 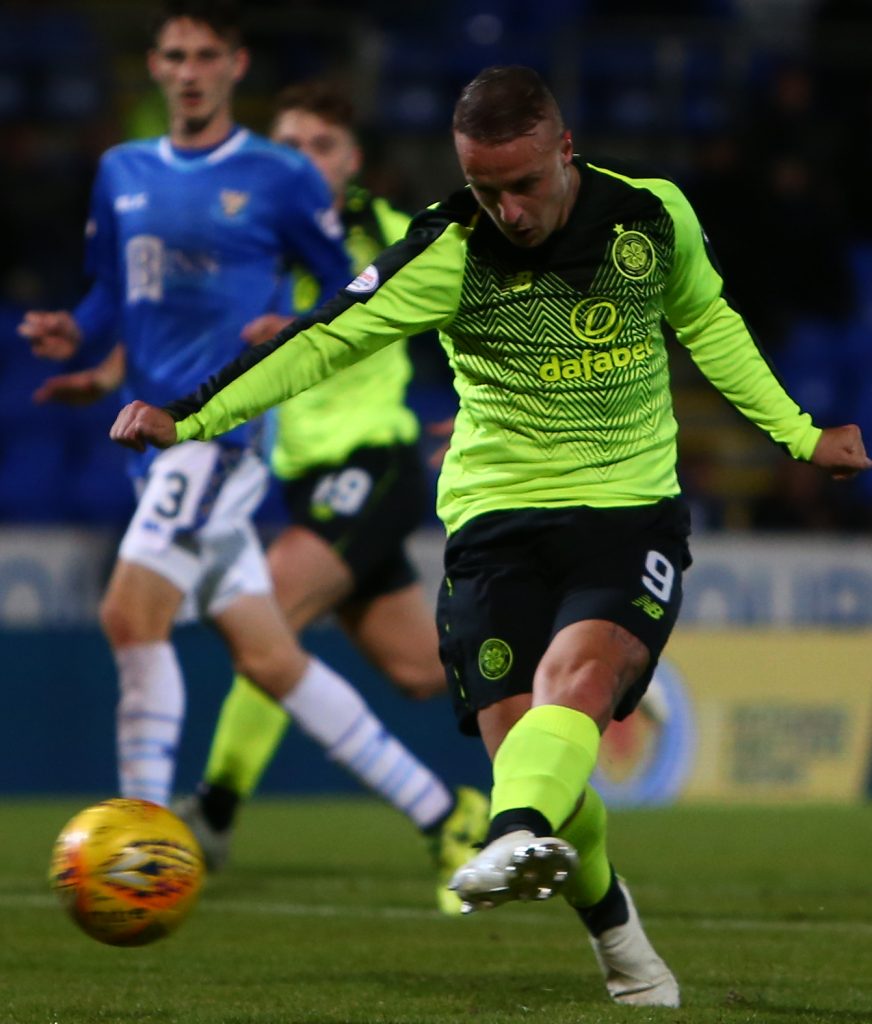 ONE THAT GOT AWAY…Leigh Griffiths’ left-foot drive was blocked by Saints keeper Zander Clark. Pic: Geo.

“Leigh is always going to be alive in the box for chances coming and it was a great finish.”

Griffiths was paired with Odsonne Edouard for the first time at McDiarmid Park and, although the partnership didn’t click immediately against the Saints, it’s something Rodgers may try again in the future.

The Parkhead gaffer added: “Odsonne is a very clever footballer, so him playing off the side is something he has done a number of times for us.

“He’s probably not the out-and-out goalscorer Leigh is, but he brings a great intelligence, pace and touch, I thought he did very well.

“Leigh is our box player up there. If we are playing in a game where we really need to stretch the team with speed that’s something I need to think about Odsonne playing more central and maybe Leigh in a different position.

“But I thought as the game wore on we started to look more like ourselves. What was important for me was the creativity.

“We created chances and on another day with a little more confidence we will probably score three or four goals.”