Celtic Quick News on News Now
You are at:Home»Latest News»GRIFF RED CARD RUMPUS
By CQN Magazine on 3rd February 2020 Latest News
COMEBACK Bhoy Leigh Griffiths was involved in a red card rumpus during Celtic’s 4-1 win over Hamilton Accies yesterday.
And boss Neil Lennon has told his 29-year-old striker to calm down after a first-half flashpoint incident.
Griffiths, playing in his fourth successive game since the mid-winter break, got involved with defender Sam Woods as they clashed going for a bouncing ball. He was then booked by referee Nick Walsh for shoving Alex Gogic in the aftermath. The Accies player was also yellow-carded for his part in the brief flare-up.
Lennon admitted he hadn’t seen a replay of the action, but didn’t think it merited an ordering-off on first viewing.

However, the Hoops boss, who had just seen the champions move seven points clear at the top of the Premiership, made it clear the club would not tolerate any misbehaviour by their players.

Lennon, speaking to BT Sport, said: “I haven’t seen it again, I’m not convinced he stands on him, but he pushed the boy. That’s not a red card offence, but he shouldn’t have done it. We’re very big on discipline here at the club and I don’t like to see things like that. 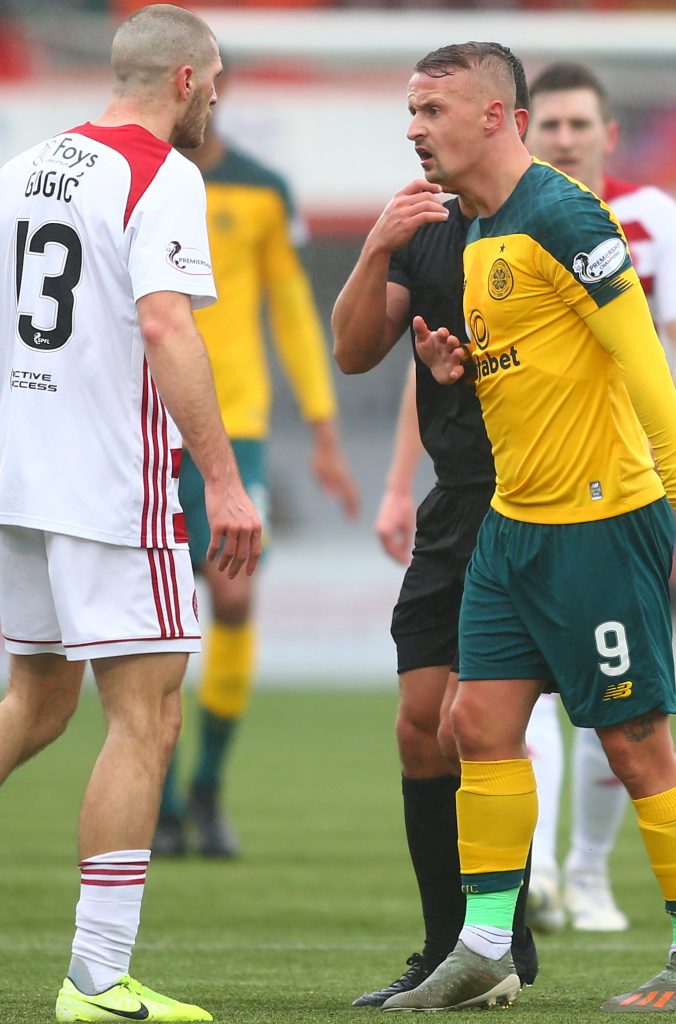 “It’s not a red card, but he lost his temper. We need discipline at the minute. We can’t be doing with losing men on the pitch.”

The Griffiths-Woods confrontation provoked a reaction from BBC pundits Michael Stewart and Steven Thompson who couldn’t agree with each other.

Former Scotland and Ibrox striker Thompson, speaking on Sportscene, said: “I think it’s a red. I think he knows what he’s doing – it’s certainly not subtle. For me, I think it’s a red card.

“The only thing that comes into my mind is brutality or excessive force. Maybe it’s not, but the last time I checked you certainly can’t stand on somebody’s chest.”

However, ex-Hearts and Hibs midfielder insisted: “I think the referee’s called it right.

“You can see there the defender’s hand is on Leigh Griffiths’ foot a little bit and he loses his balance. 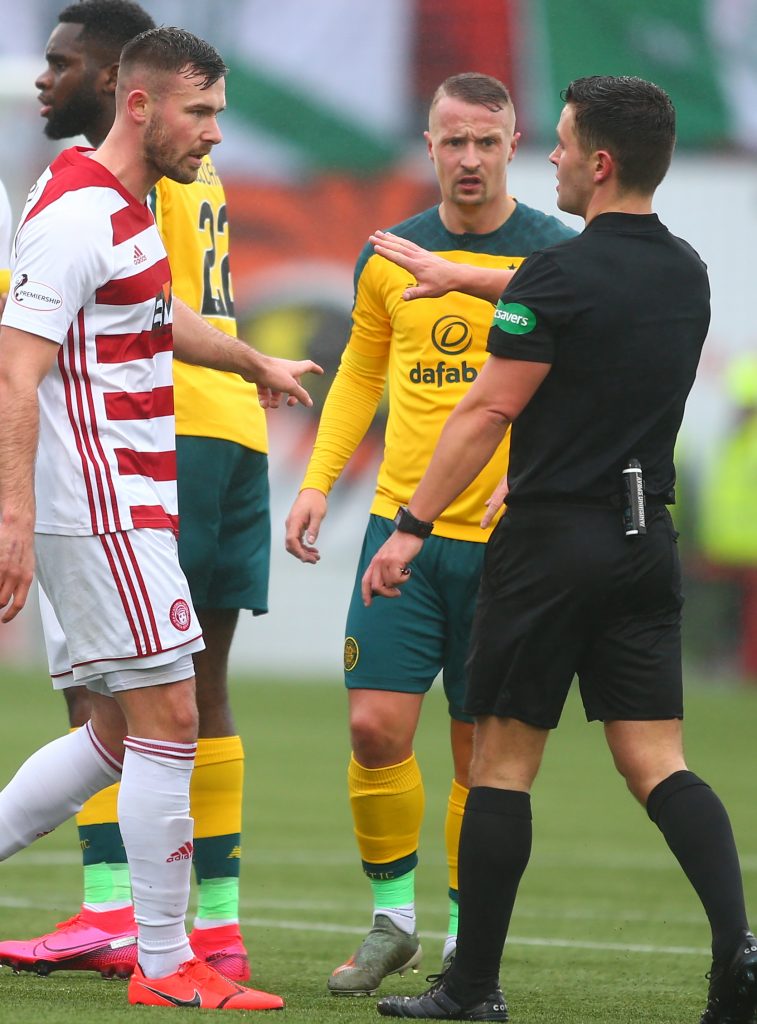 REF OFF…match official Nick Walsh has his say with Sam Woods and Leigh Griffiths on the receiving end.

“Did he mean it? Yeah. But the thing is if it’s not excessive force I think the referee’s called it right.”

Ironically, Griffiths was involved in a red-card incident when he was hauled down by Jamie Hamilton which led to to the equaliser from Odsonne Edouard.
The Hoops last red card in the Premiership came in a 2-0 defeat at Livingston in October when Ryan Christie was sent off in the first-half by referee Willie Collum for a lunge at right-back Scott Robertson.
MAGNIFICENT SEVEN AFTER THREE-GOAL SALVO
Click Here for Comments >
Share. Twitter Facebook Google+ Pinterest LinkedIn Tumblr Email
Previous ArticleNUMBERS UP FOR ODSONNE
Next Article IN PICTURES: HAMILTON ACCIES 1 CELTIC 4