LEIGH GRIFFITHS has answered his critics by posting a defiant message on Instagram after being left out of Celtic’s three-game tour of France.

The Hoops striker won’t travel with his team-mates today for the friendlies against Nice on Thursday, Lyon on Saturday and Paris Saint-Germain a week tomorrow.

Neil Lennon has left him at home to work on his fitness levels at Lennoxtown while his team-mates prepare for a monumental season with 10 successive titles on the horizon.

Griffiths, however, took to social media to post his retort with the words of Sylvester Stallone from the Rocky movie, as reported in the Scottish Sun.

The message read: “Let me tell you something you already know. The world ain’t sunshine and rainbows. It’s a very mean and nasty place.

“And I don’t care how tough you are, it will beat you to your knees and keep you there permanently if you let it. 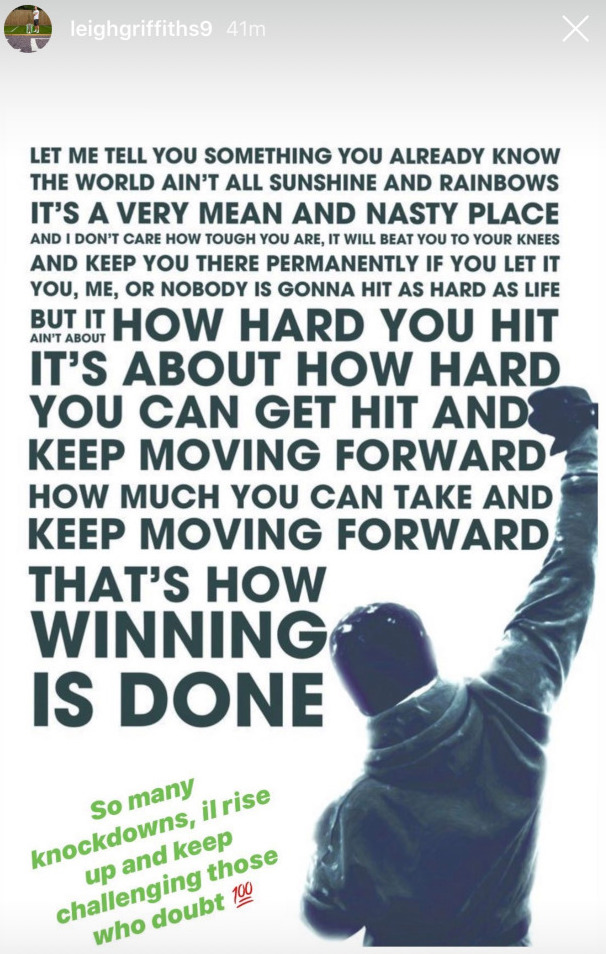 “You, me or nobody is gonna hit as hard as life. But it ain’t about how hard you hit.

And Griffiths added: “So many knockdowns, I’ll rise up and keep challenging those who doubt.”

A statement from Celtic yesterday said: “Leigh is undertaking his own fitness programme along with some other players at Lennoxtown.

“He will team up with the squad when they return from France.”

Griffiths now faces a fight to convince boss Lennon he can play a key role in the Hoops’ historic bid for ten in a row.

Lennon planned to team up the 29-year-old Scotland international with Odsonne Edouard in the new campaign. The double-act sparked in the second part of the season with the Frenchman hoisting his tally to 28 for the term and Griffiths claiming eight in 13 appearances.

The Scot finished the nine-in-a-row term with a hat-trick in the 5-0 Premiership victory over St Mirren at Parkhead on March 7 – just a few days before football went into lockdown due to the coronavirus pandemic.

Now it looks as though Polish striker Patryk Klimala, who arrived in January in a £3.5million switch, and Ivorian hitman Vakoun Bayo will get their chance to impress the Hoops gaffer in France.