Celtic Quick News on News Now
You are at:Home»Latest News»GRIFF UNDERGOES OP – AND AIMS FOR TON
By CQN Magazine on 22nd May 2018 Latest News

LEIGH GRIFFITHS will have surgery today for a tidy-up operation as he prepares for the new campaign – and finally nailing that century of goals for Celtic.

The striker headed in his 98th effort for the Hoops with the winner against Hamilton Accies at the SuperSeal Stadium on April 8.

Seven games later, the frontman is still in search of the magical ton.

Griffiths said: “I’m looking forward to a rest after a long, often frustrating, season. I’ll have four weeks off to recharge the batteries and then I’ll be back ready to start again. I’m good for a break – I need to rest my body before pre-season training.

“We’re not thinking about Europe at the moment,  but once we come back there will be a plan in place. There will be meetings and we’ll have targets which we’ll be expected to meet during the course of the season. 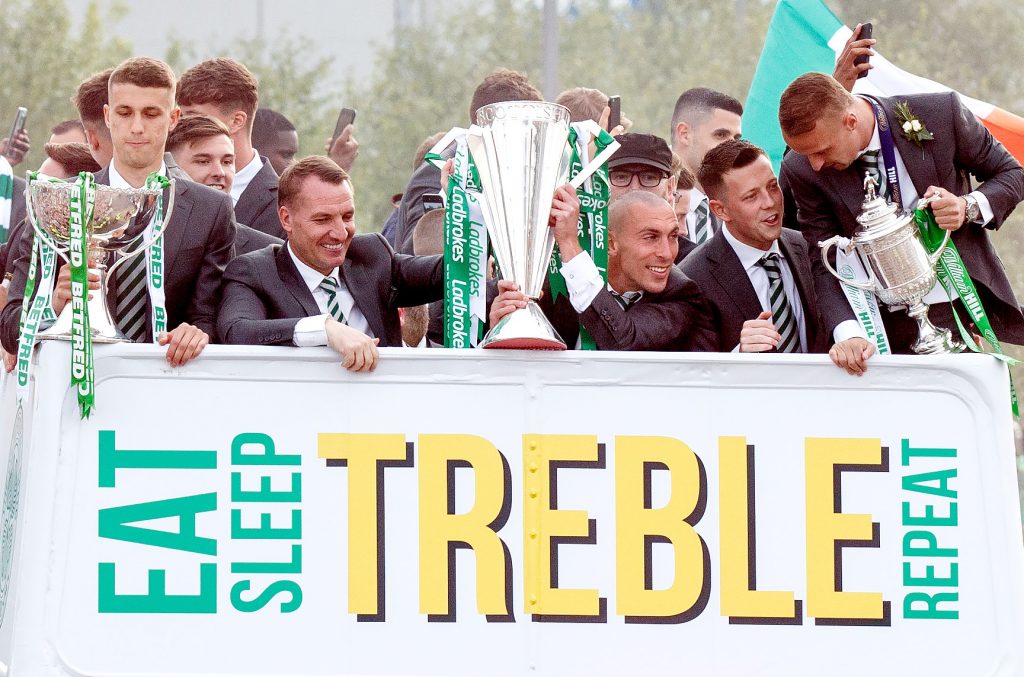 MAGIC BUS…Brendan Rodgers and his players parade the silverware during the open-top procession. Pic: Geo.

“First of all, you want to get off to a good start and, from a personal point of view, I want to be in the team and scoring goals. I’m just hoping to be injury-free next season so that I can kick on.”

Brendan Rodgers’ men face four rounds of qualifiers – with the games kicking off in early July – in order to get through to the group stages of the Champions League.

Griffiths said: “Obviously, we want to get back into the group stage, but we have four ties to get through this time. Everyone thinks that should be easy because we’re in with so-called lesser teams, but, if anything, having to play eight games to get there makes it even harder for us.

“But our fans will have a good summer and the players will, too. Hopefully, the boys who are going to the World Cup Finals will be successful there, as well. What we’ve done this year is a great achievement and we’re buzzing about it.

“But the main focus has to be what happens next, so we’ll need to go again.”